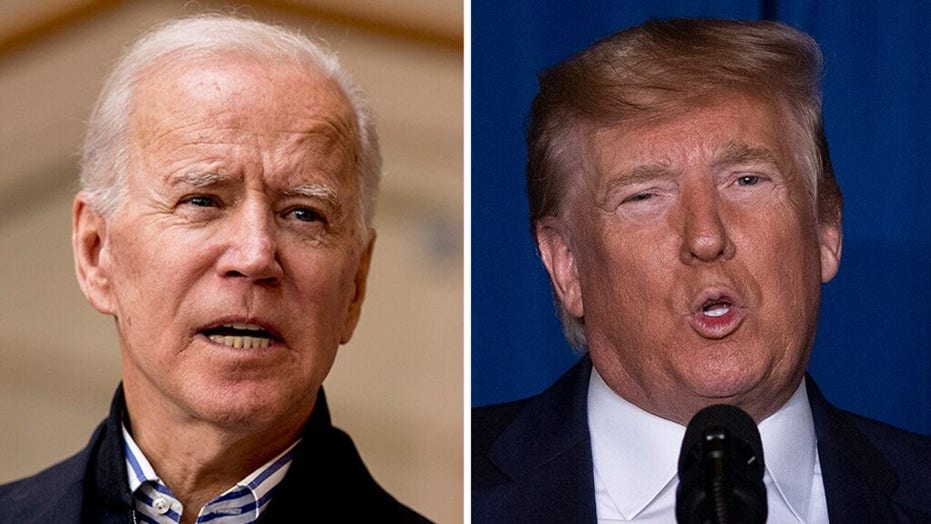 Most voters are concerned about the pandemic and the economy, so when they favor Joe Biden on coronavirus and Donald Trump has a narrow edge on pocketbook issues -- it makes for a tight race for the White House.

The latest Fox News Poll finds voters trust Biden to do a better job than Trump on health care by 17 points, coronavirus by 9, and relations with China by 6.  Trump is trusted more on the economy by a slim 3-point margin.

“That might be the election in a nutshell,” says Democrat Chris Anderson, who conducts the poll with Republican Daron Shaw.  “Trump has a slight advantage in a narrow debate about economic recovery, but a debate about coronavirus or public health more broadly benefits Biden.”

Eighty-eight percent are concerned about coronavirus spreading and 78 percent feel the economy is in bad shape.

Positive ratings dropped 49 points among Republicans (from 85 to 36 percent) since January and 22 points among Democrats (from 31 to 9 percent).

As 44 percent report someone in their household has lost work because of coronavirus, a 54 percent majority thinks the country is in the worst economic crisis since the Great Depression.  Sixty-five percent felt that way in the aftermath of the 2008 financial crisis.

More Democrats (67 percent) than Republicans (40 percent) feel it is the worst crisis since the Depression.

Republicans are more optimistic about a speedy recovery, as 50 percent expect the economy to improve in the next six months.  Just 19 percent of Democrats say the same.

In the 2020 ballot test, Biden leads Trump by 48-40 percent.  Biden’s 8-point advantage is outside the poll’s margin of error.  However, given that 11 percent are undecided or plan to vote for someone else, neither candidate hits 50 percent support.  The race could go either way.

Trump leads by 7 points among men and by 30 among rural whites.  He won both groups by larger margins in 2016 (11 and 37 points respectively).

Biden makes inroads with two key groups: independents prefer him by 13 points and voters ages 65+ by 17 points.  In 2016, Trump won independents by 4 and seniors by 7.

Sixty-nine percent are following news about the allegation of sexual assault against Biden very or somewhat closely.  The accusation comes from Tara Reade, a former staffer in Biden’s senate office in the early 1990s.

Fifty-two percent of voters say the allegation will be a factor in deciding their vote for president, including 24 percent who say it will be a major factor.  It will not be a factor for 44 percent.

More men (56 percent) than women (47 percent), and more Republicans (62 percent) than Democrats (46 percent) or independents (40 percent) say the allegation will matter to their vote.

At the same time, voters trust Biden to do a better job than Trump handling women’s rights by a 23-point margin, with one-in-ten (13 percent) saying they trust “neither.”

The small subgroup who view both negatively prefer Biden over Trump by 40-11 percent in the matchup.

As states work on ways for people to vote safely in the middle of a pandemic, voters favor allowing mail ballots this year by a 63-30 percent margin.

About one in five, 19 percent, report they usually vote by mail/absentee.  When asked about this year, nearly twice as many, 35 percent, say they want to vote by mail.

Democrats are much more likely than Republicans to favor allowing mail-in voting because of coronavirus (83 vs. 42 percent), and Democrats are twice as likely to want to vote by mail this year (46 vs. 23 percent).  In addition, groups that prefer Biden are among those most inclined to vote by mail in the fall, including women, seniors, and liberals.

Views split over the Department of Justice dropping charges against former national security adviser Michael Flynn:  31 percent approve, 37 percent disapprove, and 32 percent are unsure.  In 2017, Flynn pleaded guilty to lying to the FBI during the Russia investigation.  When asked whether the FBI acted appropriately during that investigation, 36 percent of voters say yes, while 31 percent say no.

The poll asked voters to name the worst enemy of the United States: 36 percent cite China, 18 percent Russia, 16 percent North Korea, and 7 percent Iran.  A majority of Republicans (54 percent) and plurality of independents (33 percent) put China at the top of the list.  Among Democrats, Russia is the worst enemy (30 percent), followed by China (20 percent).

Conducted May 17-20, 2020 under the joint direction of Beacon Research (D) and Shaw & Company (R), this Fox News Poll includes interviews with 1,207 randomly chosen registered voters nationwide who spoke with live interviewers on both landlines and cellphones.  The poll has a margin of sampling error of plus or minus 2.5 percentage points for all registered voters.