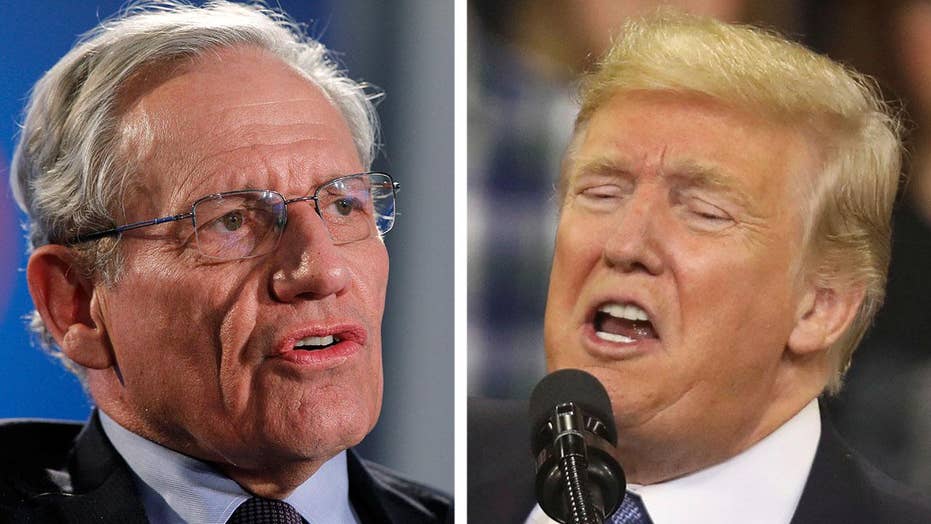 President Trump is also suggesting that the attorney general should look into who was responsible for the anonymous op-ed in the New York Times; John Roberts has the story for 'Special Report.'

President Trump on Thursday challenged Bob Woodward, questioning why the veteran journalist didn't report his comments about the novel coronavirus sooner if he thought they were “so bad or dangerous,” while claiming he was trying to keep Americans “calm.”

“Bob Woodward had my quotes for many months,” Trump tweeted Thursday. “If he thought they were so bad or dangerous, why didn’t he immediately report them in an effort to save lives?

“Didn’t he have an obligation to do so?” the president continued. “No, because he knew they were good and proper answers.”

In February, Woodward interviewed the president for the book, and Trump described the novel coronavirus as “deadly stuff,” even as he publicly compared it to a seasonal flu.

But Woodward is pushing back against critics who claim that he should have immediately published Trump’s comments.

Washington Post media critic Erik Wemple, whose paper published the audio of Trump's comments, tweeted Wednesday evening that he had interviewed Woodward and pressed him about the blowback he has received.

According to Wemple, when asked why he did not go public with Trump's comments about the virus being "deadly," Woodward explained he "didn't know where Trump was getting his information, whether it was true, and so on.”

"It took him three months to nail down all the reporting about what Trump knew about coronavirus, when he learned it and how all that related to the public pronouncements he was making," Wemple tweeted of Woodward. "It wasn't until May that he put those pieces together."

According to the media critic, Woodward flatly denied that the content of his interviews with the president would have "saved lives" if they were publicized sooner.

"Asked directly whether earlier publication of his interviews would have saved lives, Woodward responded, 'No! How?'" Wemple wrote. "He pointed out that Trump made that comment on March 19, and he had already made an Oval Office address on March 11. Confirmed cases were taking off."

Wemple followed, "Woodward did say that if anything he gathered was a legitimate public health issue, he would have gone to The Post and sought to have it published forthwith. 'It wasn't. It wasn't,' he told me."

“Rage” was written after Trump spoke to Woodward – who is an associate editor for the paper – for 18 on-the-record interviews between December 2019 and July 2020. The Post reported Wednesday on passages from the book, including Woodward's discussions with the president.

Meanwhile, Fox News has learned that multiple White House officials were completely caught off guard by the revelations in Woodward’s book.

Sources told Fox News that officials knew the book was coming, but did not know how many on-the-record interviews the president had granted to Woodward, or how long the conversations had been.

Additionally, two White House officials told Fox News that they were unaware that Woodward had tapes of the conversations.

White House Chief of Staff Mark Meadows, during an interview on “The Story” Wednesday night, said that Woodward’s “access to the White House is probably something that I would not have recommended had I been in the chief of staff role early on, but it’s the typical thing the president does.”

As for the comments about the severity of the virus, the president defended himself Wednesday, saying: "You cannot show a sense of panic," while downplaying Woodward's book as "just another political hit job."

“The president just days after having this discussion with Bob Woodward, said this from this podium, on March 30, he said, ‘I do want them to stay calm, we are doing a great job, if you look at the individual statements they are all true, stay calm, it will go away but it's important to stay calm,’” the press secretary said. “So this president does what leaders do -- good leaders -- it’s stay calm and resolute at a time when you face an insurmountable challenge.”