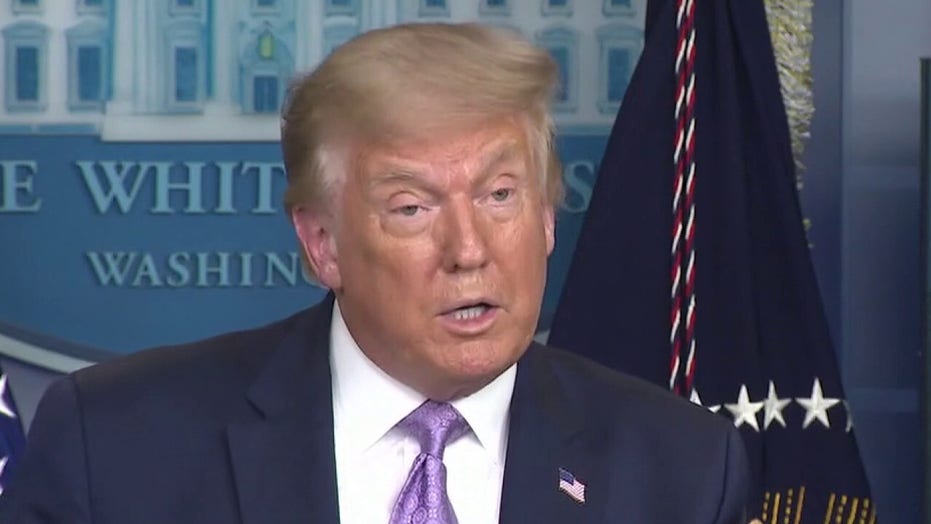 Trump fires back at Biden's push for mask mandate

Trump’s reelection campaign announced Friday that the president will hold events in Minnesota and Wisconsin on Monday and Arizona on Tuesday.

WHO'S SPEAKING AND WHEN AT THE DEMOCRATIC CONVENTION

While the Trump campaign has not announced the president’s travel for next Thursday, campaign officials confirmed to Fox News that Trump is expected to visit Scranton, Pa. – the city where Biden was born and spent his early years. The trip should come hours before Biden is scheduled to give his presidential nomination acceptance address, which will be the biggest speech of his half-century career in politics.

Typically a presidential nominee will lie low as the opposition party holds its nominating convention – but Trump has repeatedly proven that he’s not one to adhere to political traditions.

The announced stops in Mankato, Minn.; Oshkosh, Wisc.; and Yuma, Ariz., are scheduled to be held at hangars or other aviation facilities at airports – and will likely use Air Force One as a backdrop.

With Air Force One as a backdrop, U.S. President Donald Trump holds a campaign rally at Huntington Tri-State Airport in Huntington, West Virginia in 2018. REUTERS/Cathal McNaughton

Air Force One – one of the most iconic symbols of the presidency and the power that comes with it – was the planned backdrop for a scheduled Trump rally at an airport in the battleground state of New Hampshire last month, which was cancelled. When announcing the postponement of the rally – which would have been the president’s second since the coronavirus swept the nation in March – the Trump campaign cited concerns about a forecast tropical storm that ended up not impacting Portsmouth, where the rally was planned.

In recent days, the president acknowledged that health concerns over large gatherings during the pandemic was the reason the rally was cancelled.

An average of the most recent public opinion polling in those states compiled by Real Clear Politics indicates the president trailing Biden by 7 points in Minnesota, down 6.5 points in Wisconsin, facing a narrow 2-point deficit in Arizona, and down 6.4 points to Biden in Pennsylvania.