President Trump: Never has there been a clearer choice between parties

EXCLUSIVE: The Trump campaign is set to release a mid-eight-figure ad buy Tuesday touting the economy during President Trump's first term after a recent emphasis on "law and order" messaging, saying the economy is the "defining issue" of the 2020 presidential race, Fox News has learned.

A senior Trump campaign official told Fox News that the buy, worth more than $10 million, is an increase to the campaign's existing television ad buy by more than 50%.

WHITE HOUSE TO HOST 'MADE IN AMERICA' EVENT, AS TRUMP, BIDEN BATTLE FOR 'BUY AMERICAN' MANTLE

The official told Fox News that the new round of ads will include one national cable buy, as well as local broadcast buys in eight key early voting states, adding a new ad presence in Arizona and Pennsylvania, while continuing ads in North Carolina, Florida, Georgia, Michigan, Minnesota and Wisconsin. The buy also includes the second congressional district in Nebraska, and the second congressional district in Maine, according to the official.

"This week’s advertising continues our strategic plan to follow the dates on the calendar, the states that are voting early, the data that always guides our decision-making and our pathway to 270," Trump campaign manager Bill Stepien told Fox News.

But the content of the new ads will shift from the message of recent ad buys – painting the president as the “law and order” candidate – and resume its pitch of a strong economy under Trump.

“We believe the economy, and who is best to handle the economy, is going to be the defining issue in this race,” the official said. “Voters know that President Trump built the world’s best economy once, and he’s already doing it a second time.”

The official added: “It’s going to be a defining issue, and will win the race.”

The campaign touted the president’s efforts in terms of job creation, saying that the Trump administration has seen 10.6 million jobs created in the last four months -- which followed historic job losses amid the coronavirus pandemic -- while billing it as “the single greatest period of job creation in the history of this country.”

Still, the campaign is not abandoning their law and order messaging, as the president during an event over the weekend again highlighted his tough-on-crime stance, and slammed Democratic rival Joe Biden as being weak.

“He’s not strong for law and order and everybody knows that,” Trump said Sunday. 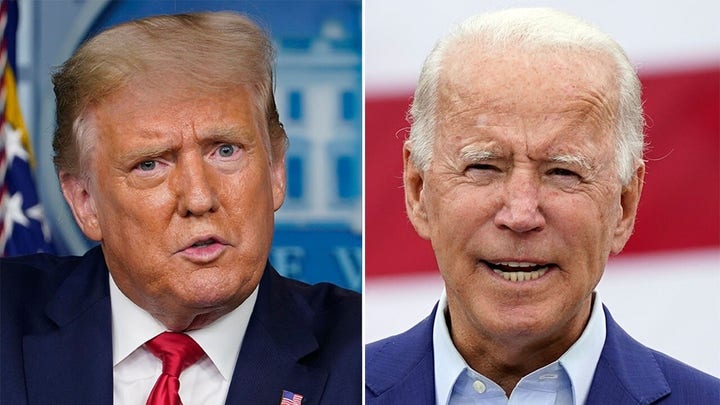 The shift from the campaign comes as priorities for voters become more clear.

The re-focusing on the economy comes as the Trump campaign aggressively highlights the president’s economic record prior to the coronavirus pandemic – as well as steps taken to recover after the shutdowns.

Democrats on the campaign trail, though, have seized on the economic downturn due to COVID-19 in an effort to tie job losses to the president’s leadership, while arguing he hadn't delivered on the economy even before the coronavirus crisis.

“Trump hasn’t stopped companies from closing plants and sending jobs overseas,” Biden said last week in Michigan. “President Trump has broken just about every promise he’s ever made to the American worker. And he’s failed. He’s failed our economy and our country.”

Meanwhile, the official told Fox News that they have been “primarily focused” on early voting states, specifically shifting their messaging to focus on the economy and present voters “with a clear choice between the president’s record on the economy and Joe Biden’s terrible ideas and terrible record.”

The ads are slated to be “testimonial ads,” and will feature “real people” speaking directly to voters.

“Testimonials straight to the camera from real people is a different direction,” the official said. “These will cut through.”

The official noted that the style of ads is a “continuation of what we did during the convention.”

“Letting Americans hear from real people whose lives have been positively impacted by President Trump’s policies,” the official said, adding that the individuals featured in the ads are part of what the president has described as the “silent majority.”

“They are sharing their testimonials and are silent no longer,” the official said.

Meanwhile, the Trump campaign has been insistent that Minnesota, which is traditionally a deep blue state, is in play this cycle.

“The fact that we are on television in Minnesota is evidence that the president has expanded the map,” a campaign official told Fox News. “He’s playing on Joe Biden’s turf.”

The official stressed that during the last cycle, then-Democratic presidential nominee Hillary Clinton “didn’t spend a single penny” in Minnesota, and the Trump campaign “ran, effectively, no campaign whatsoever.”

“It was a state that was not contested in 2016, but that the president is playing hard to win now,” the official said, saying it underscores an “expansion of the electoral map.”

As for the campaign’s efforts in Florida, the official told Fox News that the state was “obviously very important in 2016,” and “will be key again.”

Shifting back to the economy, the official said that in a state like Florida, there “are a number of things working in the president’s favor,” and the economic message resonates in the state like it would anywhere else.

Fox News has learned that part of the more than $10 million ad buy are Hispanic ads, which will appear on television in Miami, Tampa and Orlando, as well as in areas across Arizona.