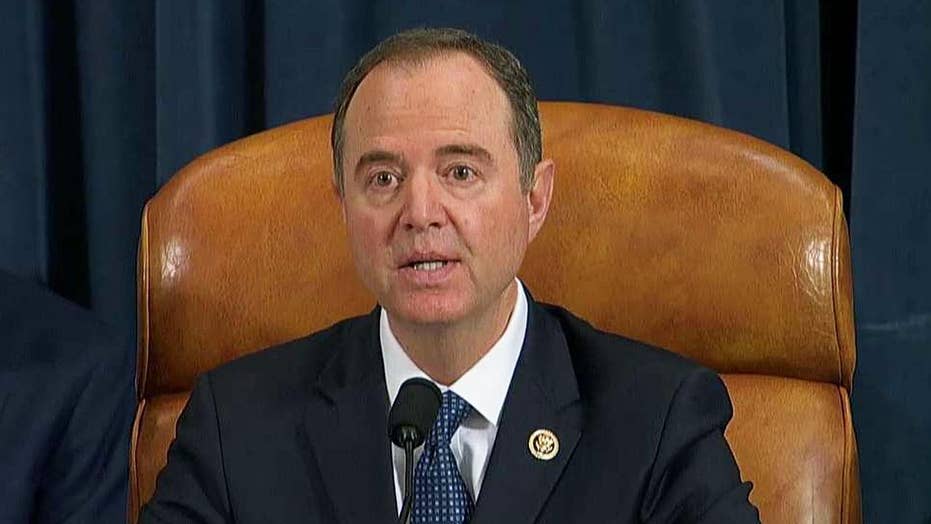 Schiff: Trump put his own personal and political interests above the nation's

President Trump's campaign is taking aim at House Intelligence Committee Chairman Adam Schiff, D-Calif., with new merchandise designed to disparage his impeachment inquiry with a pun on his name.

Released on Thursday, the "Bull-Schiff" T-shirts show the word "bull" alongside a caricature of Schiff with an extended neck -- an apparent reference to Trump calling him a "pencil neck."

"Our bull-schiff-o-meter is off the charts!" the Trump campaign tweeted. "Shifty-Schiff pushed the FAKE Russian collusion story for three years and now he’s on to another sham. Don’t let Adam Schiff get away with the bull-Schiff Ukrainian investigation." Sizes range from small to 3XL.

The new shirts were made available as Schiff led the fifth day of public hearings in House Democrats' impeachment inquiry, focusing on activities surrounding President Trump's July 25 call with Ukraine.

Trump has repeatedly denounced Schiff, who helped lead both the Ukraine inquiry and the House intelligence committee's investigation into Russian interference in the 2016 election.

On Wednesday, Trump blasted Schiff as a "corrupt politician," telling reporters the congressman "stands up and he tells lies all day long ... We have no due process."

On Thursday, Trump directly attacked the congressman on Twitter. "No pressure on Ukraine," he said, referring to allegations of a quid pro quo. "Great corruption & dishonesty by Schiff on the other side!"

Schiff has accused Trump of engaging in a quid pro quo in pushing for Ukraine to investigate former Vice President Joe Biden, his son Hunter and Hunter's role on the board of Ukrainian natural gas company Burisma Holdings. "[Trump's efforts] to help his reelection campaign was a basic quid pro quo," he said.

He added that Trump's actions were a "conditioning of official acts for something of great value to the president. These political investigations -- it goes right to the heart of the issue of bribery as well as other potential high crimes or misdemeanors."