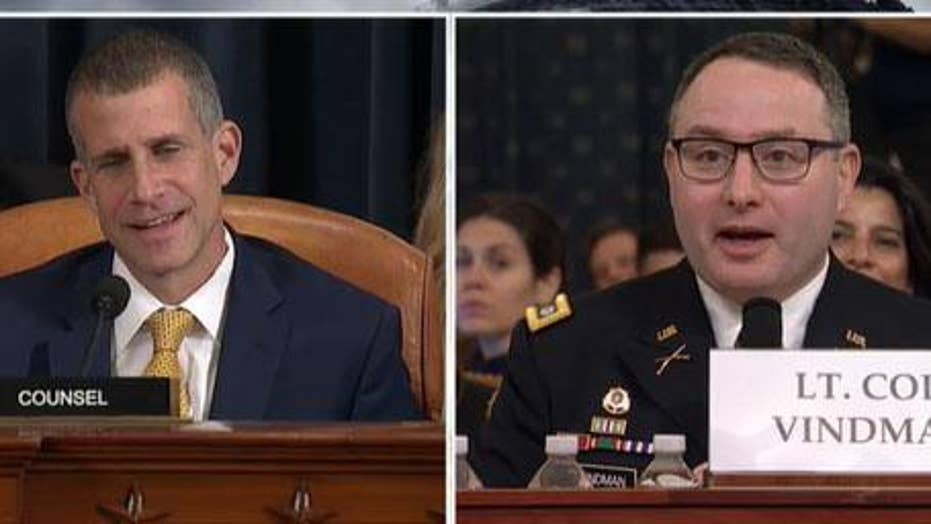 President Trump branded House Democrats' impeachment inquiry a "coup" and "charade" in an apparent rebuke of the way they were handling a public hearing on Capitol Hill Tuesday.

In a video posted to Twitter, the Trump campaign indicated the committee's chairman, Rep. Adam Schiff, D-Calif., led a coup that Democrats plotted after his election in 2016.

"This impeachment is a charade," a narrator said alongside a video of Schiff. It pointed to a tweet from Mark Zaid -- the lawyer for the whistleblower who reported that call -- in which he claimed that a "coup has started."

"That's right. The whistleblower's own lawyer wrote that the coup has started and that impeachment will follow," the narrator said. "They promised a coup and now they're trying to carry it out. The Democrats are trying to overthrow President Trump, undo the 2016 election, and silence our voices. Don't let them."

The video echoed the administration's previous criticisms and touched on a concern raised about Zaid's impartiality.

The campaign video was referring to a 2017 tweet in which Zaid responded to Trump's criticism of Sally Yates, a former DOJ official whom the president accused of betraying her department after she famously told employees not to defend the president's travel ban.

“Those tweets were reflective and repeated the sentiments of millions of people," Zaid told Fox News in November. "I was referring to a completely lawful process of what President Trump would likely face as a result of stepping over the line, and that particularly whatever would happen would come about as a result of lawyers. The coup comment referred to those working inside the Administration who were already, just a week into office, standing up to him to enforce recognized rules of law.“