President Trump, in an interview this week, accused former Vice President Joe Biden of having “recalibrated on everything” -- as the Democratic 2020 presidential hopeful faces increased scrutiny for his past positions from his party’s left flank.

“He has recalibrated on everything… Everything he’s said he’s taken back two weeks later because he’s getting slammed by the left. And he stuck with this stuff. He’s really stuck with this,” Trump said in an interview with ABC News.

Trump appeared to be making reference to a dramatic shift in stance from Biden on the Hyde Amendment, which outlaws federal funding for abortion. Biden had voted for the amendment during his decades in the Senate and expressed support for it earlier this month.

However, under a cavalcade of criticism from his party’s left-wing base, Biden flipped his stance a day later, saying he "can no longer support an amendment that makes" a woman's right to an abortion "dependent on someone's ZIP code."

"I make no apologies for my last position, and I make no apologies for what I'm about to say," Biden said at an event in Atlanta, defending his change of heart. "I can't justify leaving millions of women without access to the care they need and the ability to exercise their constitutionally protected right." 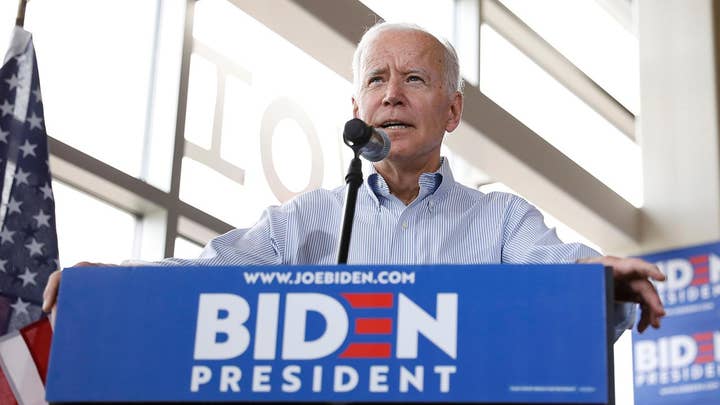 Trump’s criticisms comes as Biden has risen to the top of the Democratic field and has increased his attacks on the president, including calling him an “existential to threat to America” this week.

Trump brushed off the attack in his interview with ABC: “He wanted to be the tough guy. He’s not a tough guy; he’s a weak guy,”

On Friday he also took a swing at Biden in an interview with “Fox and Friends,” saying he “doesn’t have what it takes.”

"It means mental capacity. It means a lot of different things. He never did have what it takes," said Trump, joking that he used to refer to Biden as "1 percent Joe" for his prior failed presidential runs.

However, Trump’s campaign acknowledged this week having internal polling earlier this year that showed Biden well ahead of Trump in several battleground states -- although the campaign insists that such numbers are “ancient” and “meaningless” now.