Where does the legal fight stand from here? Constitutional law attorney Jenna Ellis weighs in.

President Trump blasted Robert Mueller as “highly conflicted” on Thursday, claiming the special counsel "would have brought charges" against him in the Russia investigation if he had "anything" but that "there were no charges to bring," while calling impeachment a "dirty, filthy, disgusting word."

The president's comments were in response to what Mueller said during his rare public appearance on Wednesday, and in response to Democrats using Mueller's statements as ammunition to begin considering impeachment proceedings. Mueller emphasized a day earlier that charging the president with a crime was "not an option" due to longstanding Justice Department policy and maintained that if he had "confidence" the president did not commit a crime, he would have said so.

“The Greatest Presidential Harassment in history. After spending $40,000,000 over two dark years, with unlimited access, people, resources and cooperation, highly conflicted Robert Mueller would have brought charges, if he had ANYTHING, but there were no charges to bring!” Trump tweeted Thursday.

The president, in his tweet said that Russia helped him "get elected" through their interference in the 2016 election, though said he "had nothing to do" with it. Mueller said Wednesday "there were multiple, systematic efforts to interfere in our election," but said there was "insufficient evidence to charge a broader conspiracy" involving the Trump campaign. Later Thursday morning, the president clarified his tweet, by stating that Russia did not help him win the election.

“Russia, Russia, Russia! That’s all you heard at the beginning of this Witch Hunt Hoax...And now Russia has disappeared because I had nothing to do with Russia helping me to get elected. It was a crime that didn’t exist,” Trump continued. “So now the Dems and their partner, the Fake News Media say he fought back against this phony crime that didn’t exist, this horrendous false acquisition, and he shouldn’t fight back, he should just sit back and take it. Could this be Obstruction? No, Mueller didn’t find Obstruction either. Presidential Harassment!”

Later Thursday morning, Trump, departing the White House, repeated his criticism that the special counsel was "totally conflicted," and claimed that Mueller, who served as FBI director under the Bush and Obama administrations, wanted to be tapped to lead the bureau again during the Trump administration.

"He wanted to be FBI director," Trump said. "Mueller should have never been chosen--he wanted the FBI job and didn't get it and then was picked as special counsel."

Trump added that he believes that Mueller is a "true never Trumper," and blasted the special counsel prosecutors as "18 Trump haters and some of the worst humans."

As for Russia, Trump said "Russia didn't help me get elected. I got me elected."

"Russia didn't help me at all, if anything, they helped Hillary. This is all about Russia, Russia, Russia -- it turned out to be a hoax," Trump said, adding that "of course" he "fights back" against "false" accusations."

"It's a very sad period for this country," Trump added. "And in the end, I will consider what's happening now to be one of my greatest achievements."

The president’s comments come just one day following Mueller gave his first and only public remarks on the Russia investigation. The special counsel on Wednesday from the Justice Department announced that the investigation was officially complete, that the special counsel’s office was closed, and that he would be resigning from the agency and returning to private life.

Mueller did not mince words on his inquiry into whether the president obstructed justice, setting the stage for congressional Democrats to intensify their impeachment push.

Mueller explained that the longstanding Justice Department policy, which is derived from an Office of Legal Counsel opinion, states that a sitting president cannot be charged with a crime.

“Charging the president with a crime was not an option we could consider,” Mueller said, adding that “it would be unfair to accuse someone of a crime when there could be no court resolution of the charge.”

But, in what many on the left took as a signal to Congress to begin impeachment proceedings, Mueller stated that: “The Constitution requires a process other than the criminal justice system to formally accuse the president of wrongdoing.”

Mueller’s statement echoed his report which stated that Congress “may apply obstruction laws to the President’s corrupt exercise of the powers of office accords with our constitutional system of checks and balances and the principle that no person is above the law.”

“We want to do what’s right and what gets results,” Pelosi said Wednesday. “We’re legislating, we’re investigating and we’re litigating.” 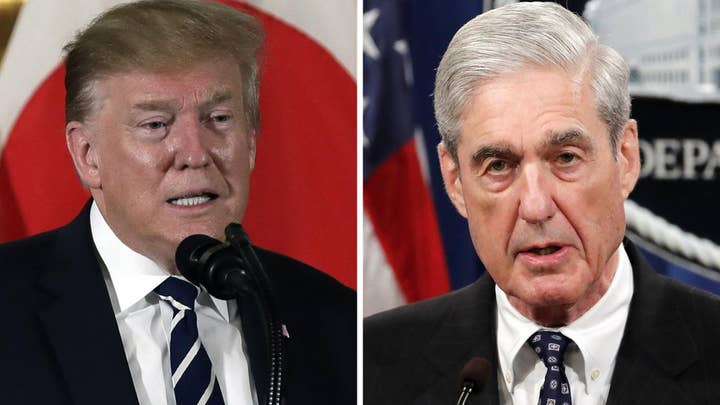 But House Judiciary Committee Chairman Jerrold Nadler, D-N.Y., whose committee would lead any potential impeachment proceedings, said: “all options are on the table.”

But Trump blasted the idea of impeachment, calling it a "scam."

"I don't see how they can," Trump said. "It's a dirty, filthy, disgusting word, impeach. It's high crimes -- there was no high crime. So how do you impeach?"

But over at the White House, senior officials seized on the part of Mueller’s announcement that clearly stated the probe was complete.

“The Special Counsel has completed the investigation, closed his office, and has closed the case. Mr. Mueller explicitly said that he has nothing to add beyond the report, and therefore, does not plan to testify before Congress. The report was clear—there was no collusion, no conspiracy—and the Department of Justice confirmed there was no obstruction," White House Press Secretary Sarah Sanders said in a statement. "Special Counsel Mueller also stated that Attorney General Barr acted in good faith in his handling of the report."

Meanwhile, Attorney General Bill Barr appointed U.S. attorney from Connecticut, John Durham, to investigate the origins of the Russia probe,  including the use and assignments of FBI informants, as well as alleged improper issuance of Foreign Intelligence Surveillance Act (FISA) warrants. Durham was asked to help Barr to "ensure that intelligence collection activities by the U.S. Government related to the Trump 2016 Presidential Campaign were lawful and appropriate."