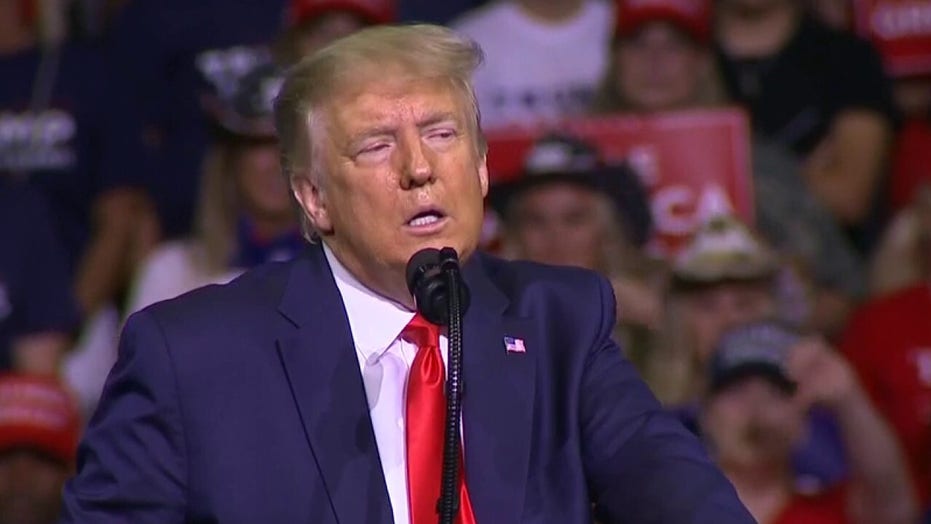 President Trump sounds off on the left's 'cruel campaign of censorship' at his rally in Tulsa, Oklahoma.

In his return to the campaign trail Saturday in Tulsa, Okla., President Trump criticized demonstrators and politicians who have pushed to have portraits and statues of historic figures removed.

“The unhinged left-wing mob is trying to vandalize our history, desecrate our monuments, our beautiful monuments, tear down our statues and punish, cancel and persecute anyone who does not conform to their demands for absolute and total control," Trump said.

“This cruel campaign of censorship and exclusion violates everything we hold dear as Americans," the president added. “They want to demolish our heritage so they can impose their new repressive regime in its place."

Several politicians have called to have the 11 statues of Confederate officers and leaders currently located in the National Statuary Hall in the U.S. Capitol building removed.

Sen. Cory Booker, D-N.J., and Senate Minority Leader Chuck Schumer, D-N.Y., took to the Senate floor this week to ask for unanimous consent to have the statues removed. The motion was blocked by Sen. Roy Blunt, R-Mo.

Trump has previously said he will not even consider renaming U.S. military bases that carry the names of the Confederate legacy. He suggested this attitude again Saturday during his rally, saying: “We’re not conforming, that’s why we’re here, actually.”

Trump, who touted the Republican Party as the "party of Abraham Lincoln" Saturday night, also said the call to remove historic statues and portraits is a form of “censorship.”