President Trump on Saturday sharply criticized the Obama administration for not doing "something" about the 12 Russian intelligence agents who were indicted for allegedly hacking emails during the 2016 election.

"The stories you heard about the 12 Russians yesterday took place during the Obama Administration, not the Trump Administration," Trump wrote on Twitter. "Why didn’t they do something about it, especially when it was reported that President Obama was informed by the FBI in September, before the Election?'

Trump's tweet -- which echoed his previous criticisms of the Obama administration's purported inaction on Russian hacking -- is the latest sign of how he will approach his planned meeting with Russian President Vladimir Putin at a summit in Helsinki on Monday.

Trump has already promised to ask Putin about the new allegations of Russian involvement in the 2016 election -- an issue he has discussed with the Russian president before.

"There won't be a Perry Mason here, I don't think," Trump said Friday in Britain. "But you never know what happens, right? But I will absolutely firmly ask the question."

Trump has previously said he trusts Putin "means it" when the Russian leader claimed he did not meddle in the election but has also said that he agrees with U.S. intelligence agencies on the matter.

The indictment by the federal grand jury announced Friday amounted to the clearest allegation yet of Russian meddling in the election, blaming Moscow for the email hacking scandal that rocked the 2016 race by revealing embarrassing and politically damaging discussions by major Democrats. 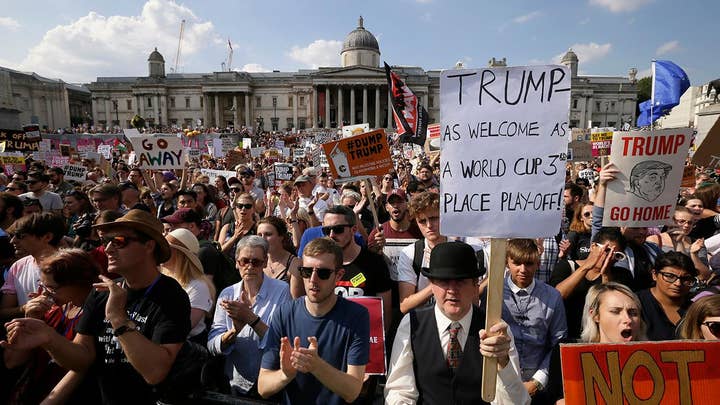 The charges swiftly fueled calls from Democratic lawmakers for Trump to cancel his Putin summit. Others have demanded that Trump press Putin on the topic.

“President Trump should cancel his meeting with Vladimir Putin until Russia takes demonstrable and transparent steps to prove that they won’t interfere in future elections," Senate Minority Leader Chuck Schumer, D-N.Y., said Friday. "Glad-handing with Vladimir Putin on the heels of these indictments would be an insult to our democracy.”

"Glad-handing with Vladimir Putin on the heels of these indictments would be an insult to our democracy."

“The conspirators covertly monitored the computers of dozens of DCCC and DNC employees, implanted hundreds of files containing malicious computer code and stole emails and other documents from the DCCC and DNC,”  the indictment read.

By April 2016, according to the documents, the defendants began to release the hacked materials to the public by using fictitious online personas like DCLeaks and Guccifer 2.0.

But the indictment did not allege that any American committed a crime or colluded with the Russians, and there are no indications in the document that vote counts were directly affected by any hacking.

Russian individuals have previously been indicted as part of the case. In February, Mueller brought a case against 13 Russians and three Russian companies who are accused of setting a “strategic goal to sow discord in the U.S. political system, including the 2016 presidential election.”