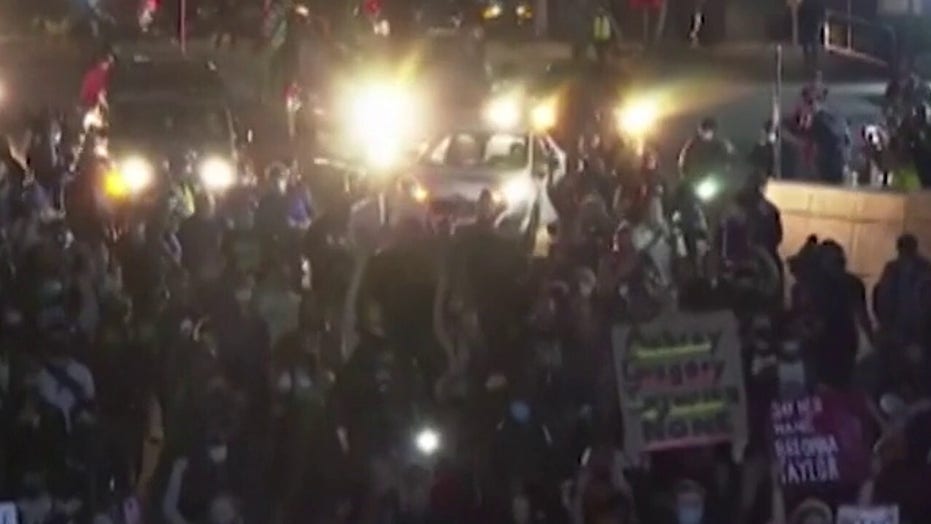 "Biden's anti-police crusade must stop," Trump said. "I will always stand with the heroes of law enforcement."

The president, who has been campaigning largely on a pro-law-and-order message as crime spikes in major cities across the country amid civil unrest, was speaking at a rally in Jacksonville, Fla.

"Joe Biden is weak as hell," Trump said of the former vice president's stance on law and order earlier in the rally. "He surrendered his party of flag burners, rioters and anti-police radicals. ... The Democrat Party's war on cops is putting police lives in danger."

The president added that he was "honored" after 48 Florida law enforcement officers endorsed his reelection on July 31.

The president then referenced to two deputies who were shot through a police car window in Compton, including one 31-year-old mother and one 24-year-old male on Sept. 12. The two were released from the hospital Monday after suffering life-threatening injuries.

As of Sept. 11, 37 law enforcement officers have been killed, and eight were killed as a result of ambush attacks, according to the FBI.

Portland police walk past a fire started by a Molotov cocktail thrown at police on September 23, 2020 in Portland, United States. (Photo by Nathan Howard/Getty Images)

The president said during the rally that he gives "credit" to Democratic Kentucky Gov. Andy Beshear for requesting the National Guard amid protests in Louisville that arose after a Jefferson Couty grand jury decided to indict one of three officers involved in the shooting of Breonna Taylor, a Black woman, on $15,000 bail.

He added that he also sent the National Guard to Minneapolis during riots, saying, "We're going to win Minnesota."

Many protesters and a number of lawmakers have called for police reform after several incidents sparked outrage over the summer.

Biden on Sept. 1 said he does not want to "defund the police," but "racism has to be dealt with."

"Let's get the facts straight. I not only don't want to defund the police. I want to add $300 million to their local budgets to deal with community policing to get police and communities back together again," the former vice president told KDKA.

"The only person defunding the police is the president," he continued. "Look at his budget. He calls for a half a billion-dollar cut in local law enforcement."

The Trump administration has made estimated reductions of $515 million in the 2021 fiscal year budget related to Justice Department funding for state and local law enforcement, as well as cuts for a community policing initiative called Community Oriented Policing Services (COPS), according to a fact check from the Austin American-Statesman.