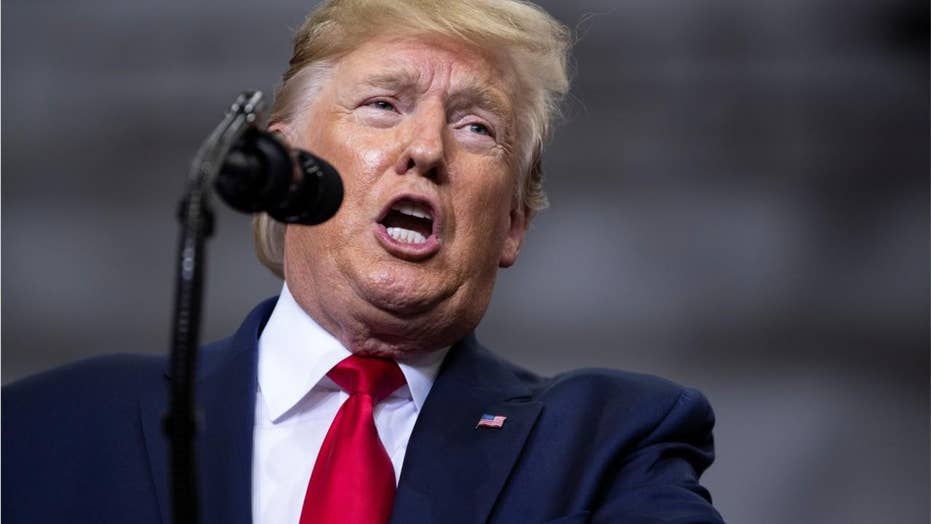 Trump pushes back on report Barr denied request for press conference clearing him on Ukraine, calls it 'fake news'

President Trump denies the story that Attorney General Barr shot down his request to have him hold a press conference clearing him of any wrong doing in his phone call with Ukraine President Volodymyr Zelensky.

President Trump on Thursday pushed back on a report that Attorney General William Barr refused a request to hold a news conference declaring that the president hadn’t broken any laws in his July 25 phone call with Ukrainian President Volodymyr Zelensky -- calling the report a “con job.”

Trump, however, has given varying indications over whether he denies he made the request or whether he simply denies that Barr rebuffed him.

“Bill Barr did not decline my request to talk about Ukraine,” he tweeted Thursday morning. “The story was a Fake Washington Post con job with an “anonymous” source that doesn’t exist. Just read the Transcript. The Justice Department already ruled that the call was good. We don’t have freedom of the press!”

TRUMP, AT LOUISIANA RALLY, HITS 'DISGRACEFUL' WHISTLEBLOWER'S ATTORNEY WHO TWEETED OF 'COUP' IN 2017

But then he tweeted a more robust denial: "The degenerate Washington Post MADE UP the story about me asking Bill Barr to hold a news conference. Never happened, and there were no sources!" This, after he tweeted earlier calling the story “totally untrue and just another FAKE NEWS story with anonymous sources that don’t exist.”

The Post reported that Trump made the request around Sept. 25 when the administration released a transcript of the call with Zelensky. The outlet reported that Trump has brought up Barr’s denial recently, and told associates he wished Barr would have held the news conference, amid the escalating impeachment probe in the House surrounding the call.

But The Wall Street Journal also reported that Trump's desire for a public announcement from Barr was discussed among White House officials, who in turn relayed that to the Justice Department. However, the outlet reported that it couldn't be determined how hard Trump had pressed for a news conference -- or the reason for Barr's denial.

Later Thursday, Trump personally attacked the Post reporters behind the initial story, calling them "lowlife reporters" and the Post a "garbage newspaper." He added that both he and Barr deny the story.

That in turn sparked a response from the Post's Executive Editor Marty Baron.

"The Post fully stands behind its story and its reporters, who are the finest journalists anywhere. The president continues to make false accusations against news organizations and individual journalists," he said. "Despite his repugnant attempt to intimidate and harass The Post and its staff, we will continue to do the work that democracy demands of a free and independent press."

The White House appears to be arguing that no matter what Trump may or may not have requested, the DOJ ended up releasing a statement on the call.

As Trump referenced in his morning tweet, a senior administration official noted that the Department of Justice did release a statement about the call. First, the Justice Department Office of Legal Counsel released an opinion on the original whistleblower’s complaint, which had claimed to report a matter of “urgent concern.” The OLC determined that the complaint, though, “does not involve an ‘urgent concern’” and does not require that the director of national intelligence “transmit the complaint to the intelligence committees.”

The DOJ further issued a statement in September saying the criminal division reviewed the call and determined there was no campaign finance violation and "no further action was warranted."

House Democrats claim that the call, in which Trump urged Zelensky to “look into” allegations about former Vice President Joe Biden and alleged Ukraine interference in the 2016 presidential election, was part of a quid pro quo involving the withholding of U.S. military aid that was temporarily blocked by the White House. Trump has denied a quid quo pro while the Ukrainians have said there was no pressure from the White House. 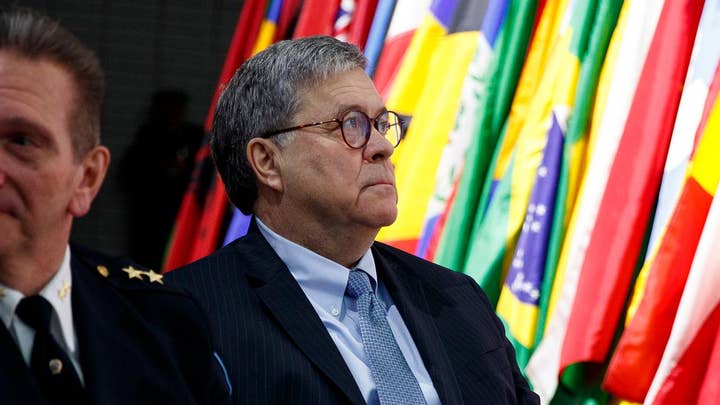 A senior administration official told Fox News that Trump praises Barr all the time and has done so privately, and called the idea that he was upset over a "phantom" request for a press conference “ridiculous.”

“The president has nothing but respect for AG Barr and greatly appreciates the work he’s done on behalf of the country -- and no amount of shady sources with clear intent to divide, smear and slander will change that,” he said.

Trump has repeatedly attacked the impeachment inquiry, as well as what he sees as the media's role in stoking the controversy surrounding the call, which he has called "perfect."

Transcripts of depositions with administration officials have been released this week, while public hearings about the circumstances surrounding the call will begin next week -- and will include current and former officials with knowledge of the controversy.

The first public hearing will feature Bill Taylor, the acting U.S. ambassador to Ukraine, who already testified behind closed doors before congressional investigators that the president pushed Ukraine to investigate election interference, Biden and his son Hunter, and their Ukrainian dealings — and that he was told U.S. military aid and a White House meeting were used as leverage to get a public announcement from Kiev that the probes were underway.