President Trump announces his support of Poland's construction of the Baltic Pipeline.

President Trump on Wednesday announced a new defense cooperation between the United States and Poland, saying 1,000 more American service members will be sent to the country as part of a “strategic partnership,” while celebrating Poland’s planned purchase of F-35 Joint Strike Fighter jets from the U.S.

The president said Poland will provide “basing and infrastructure” to support the military presence of about 1,000 American troops in the country.

Earlier in the day, the president said the United States has based tens of thousands of troops in Germany for a "long, long time" and that he probably would move a "certain number" of those personnel to Poland "if we agree to do it."

Polish leaders have lobbied for additional forces for months and had hoped for a permanent U.S. base they said could be called "Fort Trump." Eastern European nations have reached out to the U.S. and NATO for greater protection, worrying that they might be the next target of Russia's military advance.

Trump said Wednesday he’s “very pleased” that Poland has announced its intent to purchase 32 American-made F-35 fighter aircraft. In honor of that possible purchase, a single F-35 flew over the White House on a sunny afternoon.

“Moments ago we witnessed that impressive flyover of this cutting edge, F-35 as it flew over the White House,” the president said. 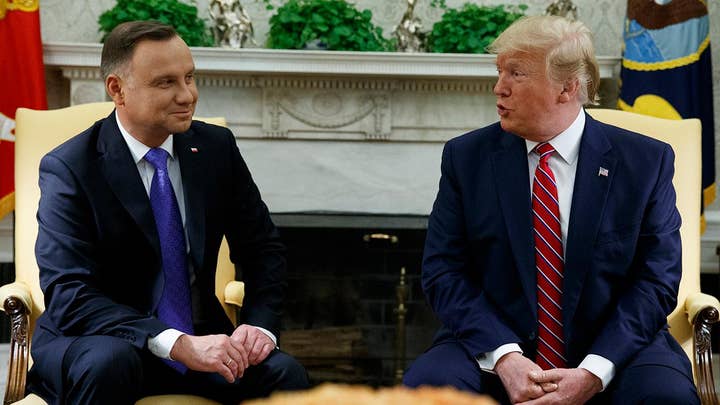 The president made the comments during a joint Rose Garden press conference with Andrzej Duda, the president of Poland. While the press conference focused on areas of agreement, Trump said he differed with Poland’s efforts to force the country’s Supreme Court justices to retire early.

Also Wednesday, Trump dismissed the suggestion that his administration’s deal with Mexico not to impose tariffs in return for more border protection efforts had been negotiated months ago. “We would have never had a deal with Mexico without imposing tariffs,” Trump said.

And he gave some rare praise to journalists at the White House after a photographer was able to capture some details about the Mexico deal on a folded piece of paper Trump was waving Tuesday.

“I had such respect for you people when I held it up to the sunlight and it was closed and you were able to read it through the sunlight,” Trump said. “That was not anticipated.”