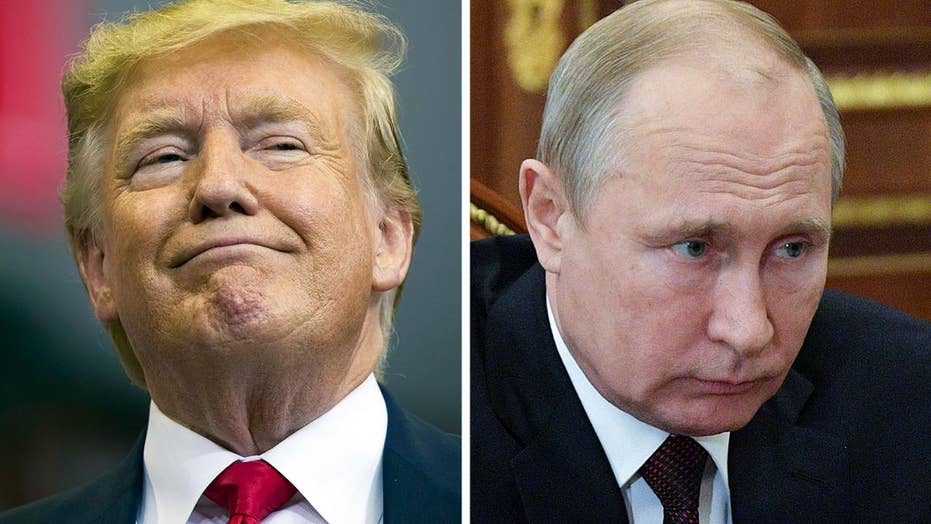 U.S. officials and NATO allies say the Russians repeatedly and consistently violating the terms of the Intermediate-range Nuclear Forces treaty that President Reagan and Soviet leader Mikhail Gorbachev signed more than 30 years ago; Kevin Corke reports from the White House.

The move to scrap the Intermediate-range Nuclear Forces (INF) treaty comes amid the administration’s assessment that Russia was in “material breach of the treaty” and made no effort to “come back into compliance” with the agreement, a senior White House official said.

Russia was given a six-month period, in accordance with the treaty, as a “final opportunity to come back into compliance” with the agreement, but the government headed by President Vladimir Putin “has made no efforts to do that,” the official added.

The end of the treaty sparks of a new global arms race between the two countries, which possess the world's largest nuclear arsenals.

The Trump administration stressed it was Russia’s fault the treaty came to an end, pointing out that Moscow has been developing and fielding weapons that violate the treaty and threaten the U.S. and its allies, particularly in Europe.

“Russia alone is to blame for this situation,” the senior official said. “We have taken every opportunity -- dozens and dozens of opportunities across two administrations – to bring Russia back into compliance.”

“Russia alone is to blame for this situation. We have taken every opportunity -- dozens and dozens of opportunities across two administrations – to bring Russia back into compliance.”

“It is clear that they are in material breach of the INF Treaty, which is, of course, not its only arms control violation. They are a serial violator of arms control agreements,” the official added, noting that “This violation, however, represents a direct security threat to the United States and our allies.”

The U.S. has long complained that the treaty was no longer fair and actually doesn’t stop the arms race as intended as Russia was openly violating it, while China, which is a non-signatory, is free develop weapons that would otherwise be prohibited.

The Trump administration said, for example, Russia has produced and fielded multiple battalions of the 9M729 ground-launched cruise missile throughout Russia, which is a violation of the treaty. Some of the missiles have “the ability to strike critical European targets.”

“This violation, which has been underway for many years, is a critical threat to American and Allied security now. That is why this action has become unavoidable,” a senior official said.

Another White House official pointed out that Russia has been deceptive about its military buildup, particularly denying the development of a ground-launched cruise missile in 2014 that is now fielded and poses a security risk to Europe.

US PULLING OUT OF COLD WAR-ERA ARMS CONTROL TREATY WITH RUSSIA, POMPEO SAYS

“Throughout the process, they lied about the existence of the missiles at both the expert level and, finally when confronted with the evidence, came clean for this in the past several months,” the official said.

European powers came out to criticize Russia for not complying with the INF treaty amid the U.S. announcement of withdrawing from the agreement.

“We regret the fact that Russia has not done what was necessary to save the INF treaty,” German Foreign Minister Heiko Maas said.

“Now we call all the more on Russia and the U.S. to preserve the New START treaty as a cornerstone of worldwide arms control,” he added. “Nuclear powers such as China must also face up to their responsibility on arms control — they have more weight in the world than at the time of the Cold War.”

“We regret the fact that Russia has not done what was necessary to save the INF treaty.”

Both the U.S. and Russia will have to decide whether to extend or replace the larger New START treaty when it expires in early 2021, a treaty that imposed limits starting in 2018 on the number of U.S. and Russian long-range nuclear warheads and launchers.

Trump hasn’t committed to extending the treaty and even once calling it as “just another bad deal” concocted by the predecessor, the Obama administration.

The 1987 INF treaty was responsible for the elimination of 2,692 U.S. and Soviet Union nuclear and conventional ground-launched ballistic and cruise missiles. The treaty also banned land-based missiles with a range between 500 and 5,500 kilometers (310 to 3,410 miles).