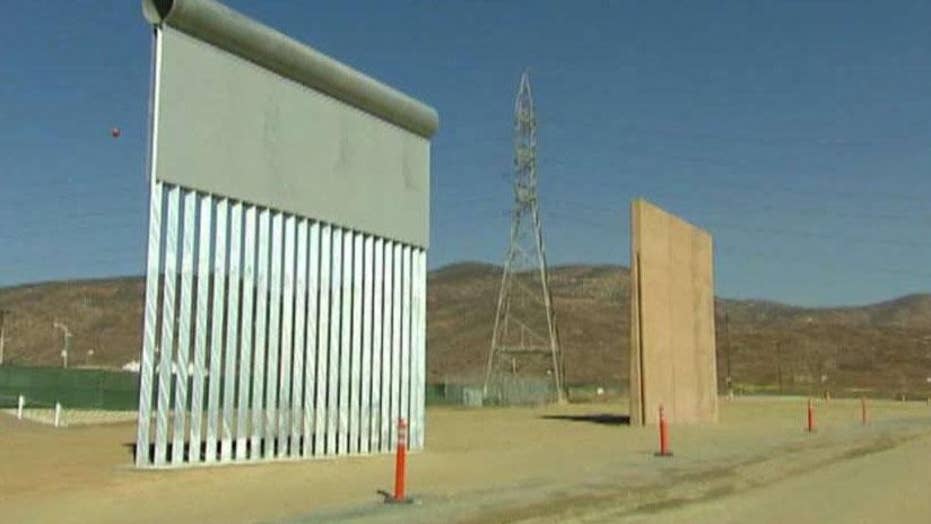 Can the bipartisan congressional panel strike a border security deal before the deadline?

Speaking exclusively to "Fox News Sunday," a top Democrat on the bipartisan congressional committee negotiating a border security compromise indicated that his party would support "some sort of enhanced barrier" -- but not a "wall" like the one President Trump has demanded.

The government is currently funded through Feb. 15, and the committee is racing to reach an agreement to avert the possibility of another partial federal government shutdown over funding for a border wall.

Texas Democratic Rep. Henry Cuellar insisted that local officials, instead of the head of the Border Patrol and other federal officers who have called for a wall, should make the final determination on what construction is necessary.

"First of all, we are not going to have a wall," Cuellar told host Chris Wallace, referring to walls as a "14th-century" solution. "Now, we can look at some sort of enhanced, uh, barrier -- that’s certainly something we can look at. But I have to say living on the border, you have to let the local Border Patrol chief have the say-so, and let the local communities be involved so they can come up with, uh, maybe some sort of enhanced barrier -- but again, Washington cannot dictate what sort of barrier and where to put it at."

The chief of U.S. Border Patrol during Barack Obama's presidency said on "Tucker Carlson Tonight" in January that walls "absolutely work" and that there is no real argument against building and implementing one. And the current Border Patrol chief, Carla Provost, told Fox News last year: "We certainly do need a wall. Talk to any border agent and they will tell you that."

TRUMP: IF WALLS ARE IMMORAL, WHY DOESN'T PELOSI WANT TO ELIMINATE EXISTING WALLS?

"I think we can get to a solution, but it does need to include barrier funding," Hoeven told Wallace. "It needs to include personnel, technology and funding for a border barrier."

FILE - In this Jan. 9, 2019 file photo, a woman walks on the beach next to the border wall topped with razor wire in Tijuana, Mexico. What started as an online fundraiser to provide President Donald Trump with donations for his southern border wall has morphed into a new foundation whose members vow to build a wall themselves. The "We The People Will Build the Wall" campaign has surpassed $20 million since it was created in December by Air Force veteran and triple amputee Brian Kolfage. The campaign has received almost 350,000 donations even as wall opponents derided the effort and after the longest government shutdown in U.S. history ended with Congress refusing Trump's demand for billions in wall funding. (AP Photo/Gregory Bull, File)

Cuellar's remarks also tracked those of House Speaker Nancy Pelosi, who has called a border wall an "immorality" and said Democrats would not appropriate any money for building one. Several prominent Democrats -- including House Majority Leader Steny Hoyer, D-Md., and Rep. Ben McAdams, D-Utah -- have distanced themselves from Pelosi's hardline stance.

Trump has hinted that he may call a national emergency if Congress does not agree to provide financial support for his proposed wall along the southern border.  (“I think there’s a good chance we’ll have to do that," Trump said last week, referring to declaring a national emergency.)

The White House has previously indicated that it would accept a "large down payment" on the wall -- an idea Pelosi summarily rejected.

In remarks set to broadcast Sunday, Trump told CBS News: "You know, there have been plenty of national emergencies called. And this really is an invasion of our country by human traffickers." He also called Pelosi "very rigid."

Are Democrats wasting time ahead of the shutdown deadline if they won't negotiate for wall funding?

Asked about the prospect of Trump declaring a state of emergency to fund the construction of a new wall without approval from Congress, Hoeven suggested that congressional Republicans would back up the president's approach.

"I think what the president is saying if we don’t compromise and he’s put compromise on the table, real compromise -- things the Democrats want -- but if we can’t get compromise out of Speaker Pelosi and a good solution, then he would be forced to go the national emergency route," Hoeven said.

But Cuellar countered that, as long as congressional negotiators are able to work without interference from the White House or elsewhere, a deal can realistically be struck well before the Feb. 15 deadline.

"If we don’t get outside pressure, the committee can sit down and work this out," Cuellar said. "Appropriators are, as you know -- in Washington, there’s Republicans and Democrats and there’s appropriators both in the House and the Senate. We can work out a deal, I know we can sit down and work it, if we just don’t get any outside pressure, do what we need to do, and I feel the process as appropriators, House and Senate Democrats, Republicans -- we can work something out."

Separately, Wisconsin Republican Sen. Ron Johnson, the chairman of the Homeland Security Committee, told "Fox News Sunday" that the president should listen carefully to objections from his fellow Republicans over his Syria policy.

In an interview set to be broadcast Sunday, Trump announced that troops have already begun withdrawing from Syria. The White House announced late last year that all 2,000 U.S. troops would be leaving the country, prompting an outcry from Republicans, who last week joined Democrats in the Senate to rebuke the move.

"I think it would just be tragic if we bugged out, left the Kurds -- who by large have done the fighting and defeated the ISIS caliphate, the territory and caliphate and ISIS -- if we just abandoned them to the mercy -- and I use that term loosely -- of Russian and Iran and possibly Turkey," Johnson said.  "It would just be unconscionable. So again I think Republican senators are sending very strong signals to the president we don’t want to see that happen, and I hope he is listening."

Johnson added that "we certainly have to protect American personnel" in Venezuela, telling Wallace, "I think that’s exactly what we have done, moving troops into Colombia -- I think the people of Venezuela will take care of this situation and we will use economic sanctions to support them."

Pressed by Wallace as to whether troops have already moved to Colombia, Johnson backed off the assertion: "I am basing it off news reports. ... That would be a prudent action, from my standpoint. I hope we have done that."

Last week, National Security Adviser John Bolton was photographed with a note on a legal pad that read: "5,000 troops to Colombia."

Sources told Fox News at the time that the White House was considering pre-positioning U.S. forces in Venezuela's western neighbor in case they are needed. However, the sources said that no such move is imminent.