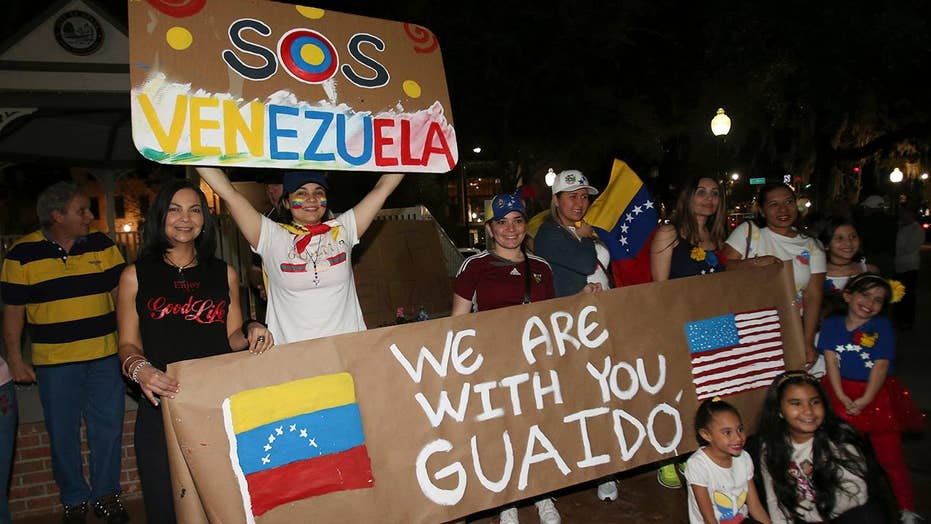 Tension, unrest in Venezuela as opposition leader declares himself president

Politicians of all stripes make big promises to get into office – but some of the most extravagant promises of the last century have come from socialist politicians pledging to reshape society as a utopia for all.

As socialist ideas enjoy somewhat of a resurgence among young Democratic lawmakers and their liberal base in the U.S., and troubled nations such as Venezuela and North Korea reel from the fallout tied to socialist policies, Fox News took a look back at some of the biggest promises of the movement and how they turned out.

When Hugo Chavez came to power in Venezuela in 1998, he promised health care for all. In 1999, he got it written into the Constitution, which stated: "Health is a fundamental social right, an obligation of the State."

Chavez also promised to make wealth more equal, “overcome poverty” and mandate higher wages. He made initial progress in expanding medical care and reducing poverty, which was praised by Americans from Sean Penn to Michael Moore.

However, the success was short-lived. Experts say it was based on using existing wealth rather than creating new wealth.

“He took from the private sector that existed, and enjoyed buoyant oil prices, to buy off the electorate,” said Fergus Hodgson, executive editor of Antigua Report, a Latin American business consulting agency.

“This strategy was great in the short term, but it crushed investment and new businesses. Predictably, when economic activity and oil prices went south, he resorted to printing money, and we all know what has happened.”

By 2018, the Venezuelan health system was a disaster. Hospitals were out of basic medicine, and also without food for children who were starving due to extreme poverty.

Medical care and the economy itself have since fallen into shambles under Chavez successor Nicolas Maduro, sparking widespread protests. The turmoil intensified this week as numerous countries, including the U.S., recognized opposition leader Juan Guaido as interim president -- and Maduro responded by saying he's cutting off relations with the U.S.

Amid the crisis, the average Venezuelan has lost 24 pounds due to food shortages. More than 2 million people have fled the country, which was once the wealthiest in South America due to its oil wealth.

Portrait of Russian revolutionary leader Vladimir Lenin sitting at a table during a meeting of the Sovnarkom. (Photo by Hulton Archive/Getty Images)

In 1918, when Vladimir Lenin was fighting to take power in Russia, he promised: “Land to the Peasants, Peace to the Nations, Bread to the Starving!” The pledge came in a letter to socialists, urging them to revolt against a provisional government that was working to transition Russia from a monarchy to a democracy.

Lenin got his revolution. There were also grains of truth to Lenin’s three promises – which became a popular slogan.

Land was quickly redistributed from relatively wealthy farmers to poorer peasants. But after a year, a new requirement came: Farmers were forced to hand over all of their surplus produce to the government.

Historian Anne Applebaum describes how that was accomplished in “Red Famine”: "Red army soldiers ... moved from village to village, recruiting the least successful, least productive, most opportunistic peasants and offering them power ... in exchange, these carefully recruited collaborators were expected to find and confiscate the ‘grain surpluses’ of their neighbors.”

The policy led peasants to produce less food, ultimately contributing to a famine that killed 5 million people, according to "The Black Book of Communism." That caused Lenin to back off. He instead moved to a compromise system that he described as "free market and capitalism, both subject to state control" – in which peasants were subject to high taxes rather than complete confiscation of the extra food they produced.

That concession stabilized things, but it only lasted a few years. In 1929, Lenin’s successor Joseph Stalin led the total collectivization of farms – making them all government property. That sparked an even bigger famine, during which millions more starved to death.

Castro promises freedom of the press

The late Fidel Castro is seen at the May Day parade at the Revolution Square in Havana, Cuba May 1, 1998. (Photo by Sven Creutzmann/Mambo Photography/Getty Images)

Fidel Castro, in a 1959 speech on the progress of his revolution, announced that he was certain the new leader of Cuba would “decree the re-establishment of all rights and freedoms, including the absolute freedom of the press, of all individual rights.”

But the opposite happened. Today, Freedom House’s ranking of press freedoms states that “Cuba has the most repressive media environment in the Americas. ... The Cuban news media are owned and controlled by the state and the independent press is considered illegal.”

In 1947, on the eve of independence from Britain, India’s first Prime Minister Jawaharlal Nehru, an avowed socialist supporter, announced there would be “striving so that we may fulfill the pledges we have so often taken ... the ending of poverty, and ignorance, and disease, and inequality of opportunity.”

However, poverty remains rampant in India, where the average income per person is around $2,000 per year -- even though the country's economy as a whole is growing quickly and one of the largest in the world.

In the 1970s, India went further and added socialism to the country’s constitution.

Peking, China: General view of Mao Zedong, the late Chinese Party Communist Chairman, applauding as he stands on a platform overlooking a crowd.

In socialist China in 1956, Chairman Mao Zedong announced a new policy of encouraging dissent and debate. As he put it: "The policy of letting a hundred flowers bloom, and a hundred schools of thought contend.”

People were wary at first. It took about a year for people to dare to openly critique the socialist and communist government. But once they did, the floodgates of criticism opened. Encyclopedia Britannica states that: “Wall posters denounced every aspect of the government, and students and professors criticized party members.”

At that point, Mao changed his policy. Dissent was no longer allowed, and anyone who spoke up publicly was punished and often sent to deadly forced labor camps.

Later, Mao hinted that it was premeditated – saying he had “enticed the snakes out of their caves”.

Economist Bryan Caplan said many such leaders only pretend to care about reducing poverty.

“Revolutionary socialists have been far more interested in crushing their favorite scapegoats - businesspeople and the rich - than in alleviating poverty,” Caplan told Fox News.

“They’re not looking for a fruitful compromise; they’re looking to wipe out existing elites and start anew. But as usual, it’s easier to destroy than create.”