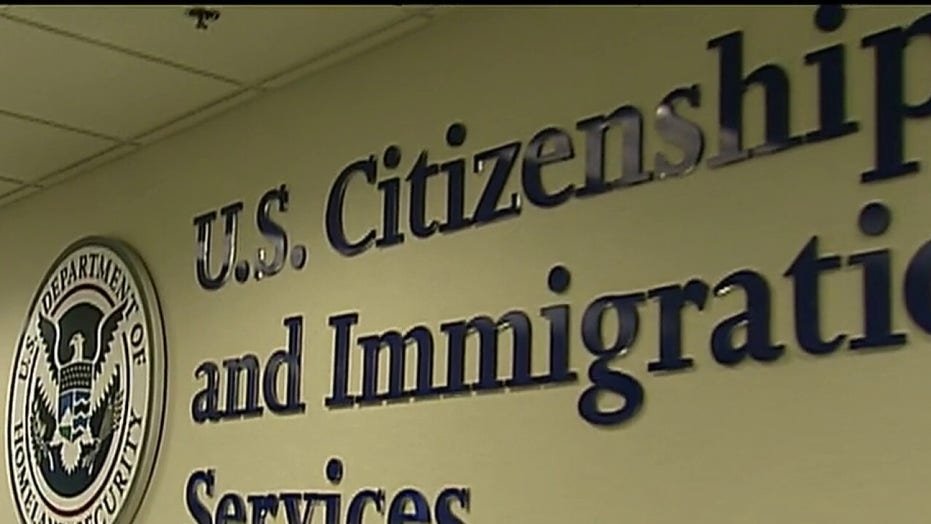 The president's order will apply only to green card applicants, employment visas and people who were awarded green cards through the diversity lottery and chain migration.

The U.S. Citizenship and Immigration Services (USCIS) alerted its federal employees that furloughs are coming July 20 because of a big budget shortfall caused by the coronavirus pandemic.

Unless Congress pulls through with $1.2 billion to keep the agency afloat, employees will be out of work starting next month, the agency said.

"Without congressional intervention, USCIS will need to administratively furlough a portion of our employees on approximately July 20," a USCIS spokesperson said in a statement to Fox News. "We continue to work with Congress to provide the necessary funding to avert this unfortunate consequence.”

USCIS didn't provide the number of employees affected, but Fox News is told that agency leaders informed some staff that the furloughs could impact about 13,000 employees, or more than two-thirds of the workforce, according to a source familiar with the meeting.

Additionally, USCIS already alerted the federal union of the looming furloughs. The American Federation of Government Employees (AFGE) put out an action alert to its union members Wednesday.

"Nearly 13,000 U.S. Citizenship and Immigration Services (USCIS) employees are facing furloughs. We only have a few days to help them," the AFGE email reviewed by Fox News said. "We've received notice that the Department of Homeland Security plans to furlough over 70 percent of workers at USCIS due to a budget shortfall partly related to the coronavirus pandemic."

USCIS offices closed in March as part of the effort to stop the spread of the coronavirus, suspending in-person services at field offices and asylum offices. President Trump has also placed significant restrictions on green cards for those already in the country -- which are usually handled by USCIS.

Unlike other government agencies, USCIS is a fee-based agency, meaning it is primarily funded by the money coming from fees that immigrants pay to have their applications processed.

USCIS alerted its staff and Congress of the budget shortfall back in May. Revenue collections from application and petition receipts are projected to drop 61 percent this fiscal year and that means USCIS will exhaust its funding this summer, the agency said.

USCIS wants Congress to pass a one-time $1.2 billion payment to allow the agency to make payroll. The agency promised to pay the funds back to the U.S. Treasury by adding a 10 percent surcharge to immigration applications.

But the House Appropriations Committee hasn't moved forward because the Trump Administration still has not submitted a request for the USCIS funding, according to a Democratic aide.

US IMMIGRATION OFFICES CLOSE UNTIL APRIL OVER CORONAVIRUS FEARS

USCIS officials are still holding out hope for congressional action to prevent the furloughs.

“Due to the COVID-19 pandemic, USCIS has seen a dramatic decrease in revenue and is seeking a one-time emergency request for funding to ensure we can carry out our mission of administering our nation’s lawful immigration system, safeguarding its integrity, and protecting the American people," the agency said in a statement. "Importantly, this funding proposal protects American taxpayers by not adding to the deficit and requiring USCIS to pay the money back to the U.S. Treasury."

After months of closure, USCIS began reopening certain field offices and asylum offices on June 4 for non-emergency face-to-face services to the public.