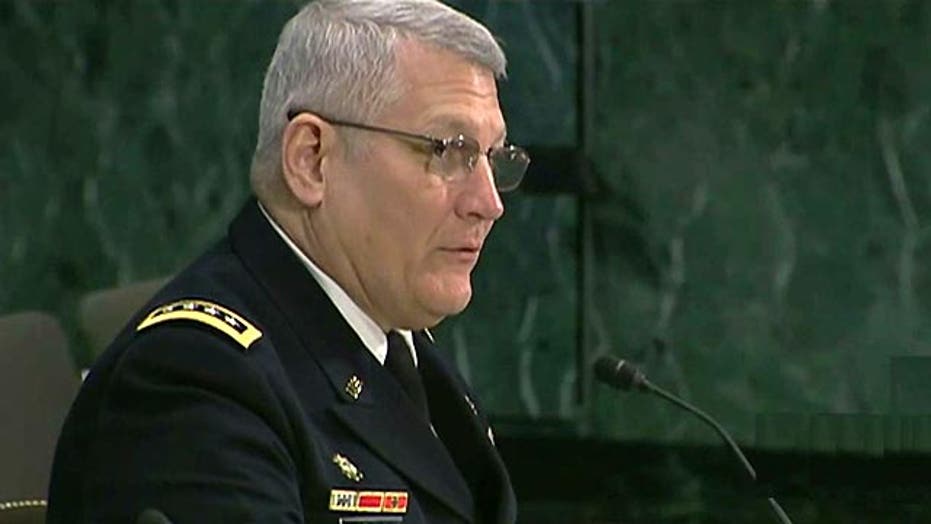 What led to slow military response to Benghazi attack?

Hundreds of pages of declassified transcripts from the U.S. military's top commanders present a picture of a woefully ill-postured military force whose assets were not in a position to quickly respond to the Benghazi terror attack -- or other hot spots across Africa and the Middle East.

The 450 pages of newly declassified transcripts detail testimony from secret, closed hearings last year before Congress. They provide fresh insight into the military's decision-making that night from the very commanders who staged the rescue efforts, including the top commander in Africa at the time Gen. Carter Ham.

Among other details, they reveal gaps in the military's positioning of assets around the world.

For example, no attack aircraft were placed on high alert on Sept. 11, and the closest F-16 fighter planes to any of the trouble spots in North Africa were in Aviano, Italy. None were armed, and the closest air refuellers were positioned 10 hours away at a base in Great Britain.

No Defense Department AC-130 gunships were within a 10-hour flight to Libya, according to committee members who heard commanders' testimony over the past 15 months. And the commander's in-extremis force, which included a unit of 23 special operators who are used at the commander's discretion, were training in Croatia that day. They did not make it to a staging base in Sigonella, Italy, for another 19 hours after the attack began, according to committee members.

Rep. Martha Roby, the Republican chairwoman of the House Armed Services Subcommittee on Oversight and Investigations, concluded: "It does not appear that U.S. military forces, units, aircrafts, drones, or specific personnel that could have been readily deployed in the course of the attack in Benghazi were unduly held back, or told to stand down, or refused permission to enter the fight.  Rather, we were so badly postured, they could not have made a difference or we were desperately needed elsewhere."

However, the commander of AFRICOM's Joint Special Operations Task Force for the Trans Sahara region, Col. George Bristol, admitted to the subcommittee on July 31 of last year that he believed there was an increased threat on Sept. 11 and was not comfortable with the military's force posture in North Africa. He expressed those concerns with members of his team in Libya. The transcript reads as follows:

REP. ROB WITTMAN: "In your professional opinion, based on that, were you somewhat uncomfortable maybe knowing about the threat that that was the posture then that was going to be there within that theater?"

BRISTOL: "Sir, I -- yes, and that wasn't the only country that I was worried about that."

Neither Bristol, who headed the AFRICOM Special Operations Task Force, nor his chief military officer on the ground in Tripoli that night, Lt. Col. Sean Gibson, who also testified to the Armed Services subcommittee, was ever interviewed by the State Department's Accountability Review Board (ARB), and the U.S. military did not conduct its own internal after-action review separate from the ARB.

The head of U.S. Africa Command, Gen. Carter Ham, who has largely remained out of the spotlight since the attack, also told the House panel last June why he made certain choices that night and what assets he had available to him. And he debunked a widespread rumor that he was removed from overseeing the military operation because he wanted to do more militarily that night than he was allowed to by his superiors or the White House.

Immediately following the Benghazi attack, the Internet became rife with speculation that Ham had been pushed out for wanting to do more militarily to help those Americans who were stranded after the attack. Shortly afterward, Ham announced his retirement, further fueling speculation that he was pushed out. Chairman of the House Armed Services Committee Buck McKeon, R-Calif., put the question to Ham.

MCKEON: "This might be a good time to ask. ... I heard that you had made the statement that you were prepared to go to their aid and somebody told you no and you said you were going anyway. Is that all some supposition that comes from some reporter?"

The new congressional testimony also shows that Ham was left out of White House-led discussions regarding preparedness and force posture on the eve of Sept. 11, despite White House assurances that then-counterterrorism adviser John Brennan had met for weeks with deputies and the nation's principal national security advisers to review "security measures" and force protection at home and abroad.

A White House press release on the eve of the Benghazi attack stated unequivocally: Brennan "convened numerous meetings," and the president and his national security principals discussed "steps taken to protect U.S. persons and facilities abroad." But according to Ham, whose area of operation came under attack, he was not asked what forces he had pre-positioned in the event of an attack and whether they were they sufficient.

ROBY: "So did anyone in DOD, the White House or national security staff, including Mr. Brennan, review the force posture with you?"

And yet AFRICOM commanders were aware of a deteriorating security situation in Libya, and had discussions at the Defense secretary and Joint Chiefs level, following a visit to Libya in December 2011 by then-Defense Secretary Leon Panetta. Panetta and his aides noted the rise of violent militias and the lack of any Marine element at the U.S. Embassy in Tripoli. It is customary for the State Department to enlist the help of a Marine detachment to secure Embassy property and classified materials in most countries around the world. Ham and other Pentagon officials had offered to provide Ambassador Chris Stevens with Marines for the Embassy in Tripoli. One of the remaining questions is why the State Department did not accept the Pentagon offer. There were no U.S. Marines stationed anywhere in Libya on the night of the attack.

WITTMAN: "Do you feel that your concerns were actioned upon in the proper way, maybe in a sense to where it could have prevented the incident there on September 11th?"

HAM: "I don't know that I would go so far to say that it would have prevented the attacks that occurred on September 11th. But it won't surprise you that as a military commander, you know, I wanted more resources. And the resource that I felt I needed most was additional intelligence, surveillance, and reconnaissance to gain a better understanding of what was happening."

Ham argued against repeated suggestions by committee members and some military analysts that sending an F-16 to fly over Benghazi on the night of the attack would have made any difference. In Afghanistan and elsewhere during the past 12 years of war, U.S. fighter jets have routinely been used in unarmed flyovers to disperse enemy forces without dropping bombs.

"I considered and could have placed aircraft on heightened alert and probably could have relocated them into other places," Ham told the subcommittee. "But I, again, knowing the intelligence that I had at the time, not obviously what I have now, but the intelligence I had at the time caused me to conclude in my military judgment that attack aircraft would not be the appropriate response tool. And so I did not direct a heightened alert."

AFRICOM commanders and Pentagon officials say they were more focused on threats emanating from Tunisia, Egypt and Sudan on Sept. 11, 2012. "As I look back at the intelligence, I don't see the indications of imminent attack in Benghazi," Ham said.

REP. JOE HECK: "[W]ere there any assets available that could have had an impact should the decision have been made to launch?"

The vice chief of operations on the Joint Staff in the Pentagon that night, Maj. Gen. Darryl Roberson, himself a seasoned F-16 pilot, added, "We were postured as appropriately as we can be and we thought we should be around the world. It wasn't just in Africa, in North Africa, that we had issues. We had issues around the world."

Other military experts counter there have been contingency plans in place in the event of an Embassy attack and a missing ambassador since 1979 when the U.S. Embassy in Tehran was overtaken, and those contingency plans do involve DOD assets serving as a global quick reaction force.

Former Navy SEAL Marcus Luttrell, the author of "Lone Survivor," was left alone on the Afghan-Pakistan border after his three team members were killed during a secret mission in Afghanistan in 2005; he was rescued by an Afghan. He questions the DOD response timeline.

"At least go get the bodies sooner than later would be my kinda argument with that -- if you got Americans in trouble who are getting overrun -- especially our embassy our ambassador -- two of my teammates. I don't care how late in the day it is -- You send help!" he said.

The attack was waged over the course of seven hours.

"The extraction took an exceptionally long amount of time," Rep. Jason Chaffetz, R-Utah, said while questioning Ham. "I still don't understand, with two men down by 10:00 p.m. local time and then another attack at 5:00 a.m. the next morning, how at 6:05 in the morning the Department of Defense prepares a C-17 to go down, and that doesn't actually depart Germany until 2:15 p.m. and doesn't return back to Germany until 10:19 p.m. I have flown with you from Germany to Libya. It is not that far a flight."

The last survivors, and the body of Stevens, did not leave the Benghazi airport, where they were waiting for a Libyan transport plane to fly them back to Tripoli, until 10 a.m. the next day, more than 12 hours after the initial attack. During testimony, it was revealed that Libyan transport planes could only fly during daylight. The sun wouldn't rise until 6:49 a.m. that day in Benghazi, more than an hour and a half after the second attack on Americans in Libya.

Further, the quick response force that was mobilized, a FAST team of Marines in Rota, Spain, was forced to deplane and change out of their uniforms before flying to Libya, committee members learned.

"When we got people down do you really have -- do you really actually let somebody push the military around and say, well, you are in the wrong uniform," Chaffetz asked in disbelief. "Is that really a reason to delay the FAST team coming in to protect Americans, that they are not wearing a t-shirt?"

The RAND Corporation's Linda Robinson, author of "100 Victories: Special Ops and the Future of American Warfare," said she has found no smoking gun suggesting the U.S. military could have done more than what it did that night. "Even our most specialized and elite warriors simply can't sprout wings and fly at supersonic speed. So there have to be provisions made in advance to respond to crises," Robinson said. "The Special Operations Command has been pushing forward with a plan to have more of a presence in Africa with the permission of those countries and with the permission of the U.S. Ambassadors posted there."

Given the rising instability in Libya before the attack, it continues to vex many congressional Armed Services Oversight members as to why the State Department did not request any Marines to be at the Embassy in Tripoli or at the temporary mission in Benghazi prior to the attack, suggesting a reluctance to have uniformed U.S. military on the ground in Libya before, during and after the attack.