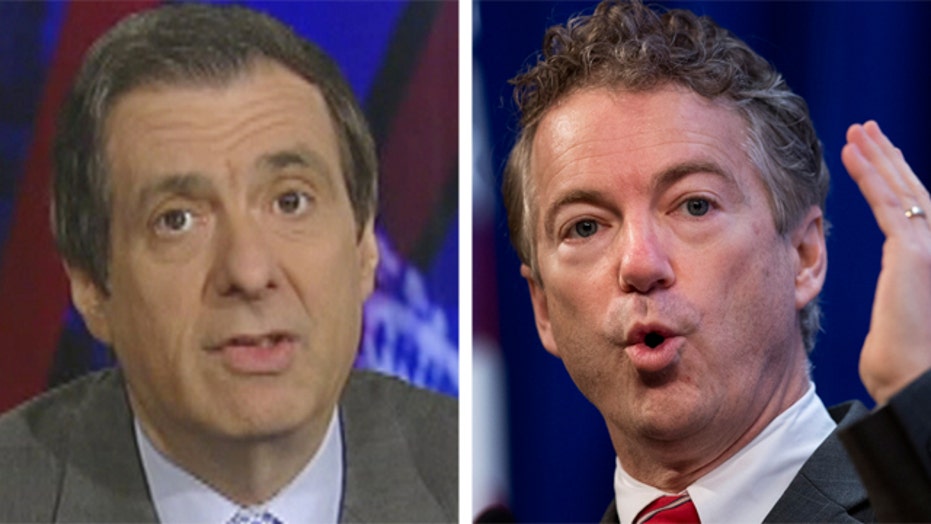 Kurtz: How Senator Paul's interview went off the rails

Rand Paul’s media rollout was going just fine until he got ticked off at Savannah Guthrie.

The newly minted presidential candidate does not shy away from the media. After a well-received announcement speech on Tuesday, he did a video interview with Politico, which was embargoed until an hourlong sitdown with Sean Hannity aired that night.

But Paul can get defensive when pressed by journalists—as he acknowledged to me in a recent interview—and he ate up precious time in yesterday’s “Today” show appearance by lecturing Guthrie about her approach. That, rather than the themes of his campaign, became the story coming out of the exclusive network sitdown.

Guthrie may have pushed his buttons by declaring that he had changed his position on several foreign policy issues. But this was not some wild charge out of left field; numerous print stories have raised such questions. So why was the Kentucky senator unable to restrain himself?

Part of the answer is that it bugs Paul when interviewers seem to state opinions as facts. But even if that’s the case, no one ever said running for president was a cakewalk. And while making the journalist the issue may please the Republican base, it also has the potential to drown out Paul’s message.

Guthrie began the sequence by saying that Paul’s foreign policy views were “somewhat unorthodox,” but that “you seem to have changed over the years.”

“You once said Iran was not a threat, now you say it is. You once proposed ending foreign aid to Israel, you now support it, at least for the time being. And you once offered to drastically cut--”

“You wanted to cut defense spending and now you want to increase it 16 percent. So I just wondered if you’d mellowed out.”

On aid to Israel, Paul said that phasing out all foreign aid “has to be done gradually,” and “why don’t we start with countries that hate us, that burn our flag.”

Does he still think Iran is not a threat, as he said eight years ago? Paul replied that “2007 was a long time ago, and events do change over long periods of time.” He said the U.S. should do “everything we can” to stop Iran from building nuclear weapons but that he favors negotiations because he has “not been beating the drums for war.”

Perfectly reasonable answers, but they showed that Guthrie had been right: Paul’s views have evolved on some issues, and he was able to explain why. Had he gone directly to that explanation, without scolding Savannah, he would have avoided some bad press.

It was in the wake of another combative interview, when Paul shushed CNBC anchor Kelly Evans, that I asked him whether he was too thin-skinned.

“Yeah, I did learn you’re not supposed to shush people,” he said. The senator told me it was harder to read cues during satellite interviews, which is what he was doing with Guthrie, from New Hampshire.

Paul said some journalists are pros but others “ ask questions that really are simply, you can tell, are targeted from your political opponents and I'm going to ask him something just to make him mad.”

He conceded: “But I'm human. I get mad sometimes. And I try to be as even keeled as I can, but sometimes like everybody else, there are interviews that I would have done differently.”

The result was a spate of unfavorable headlines.

The Hill: “Rand Paul Gets Testy with NBC’s Savannah Guthrie.”

New York Magazine: “Rand Paul Tells Savannah Guthrie How to Do Her Job in Cringeworthy Interview.”

The view in the Paul camp is that Guthrie was unfairly editorializing, and the senator made that point in a conversation with Megyn Kelly that aired last night.

“I do lose my cool, I do lose my temper at times, and I should be better at that,” Paul said. But he thought the questions were “unfair.”

“I’m not perfect,” Paul conceded, but “contentious interviews are not one-sided.”

“At some level, these two episodes suggest that Paul seems to misunderstand the nature of running for president. It is not a college lecture class where you talk and other people listen and take notes. It is an active back and forth between the candidate, voters and, yes, the media. And, that means that sometimes you get asked things you think are (a) stupid, (b) unfair or, often, both…

“Paul's interviewing problem is made worse by the fact he has now been seen mansplaining to two well-respected female reporters. That, of course, could simply be coincidence.”

Of course. Some male reporters have surfaced to say Paul has been testy with them, too. Megyn Kelly, for her part, says “these male commentators can butt out” because female journalists can take care of themselves.

Few voters will remember these interviews six months from now.

Of course. And few voters will remember either of these interviews six months from now.

But as a freshman senator still relatively new to the national spotlight, Paul has to decide whether he’d rather stick to his message or allow himself to be drawn into spats with the journalists interviewing him—especially when he’s still introducing himself to the public. In short, the question is whether Rand Paul will come to view the Guthrie interview as among those, as he told me, “that I would have done differently.”