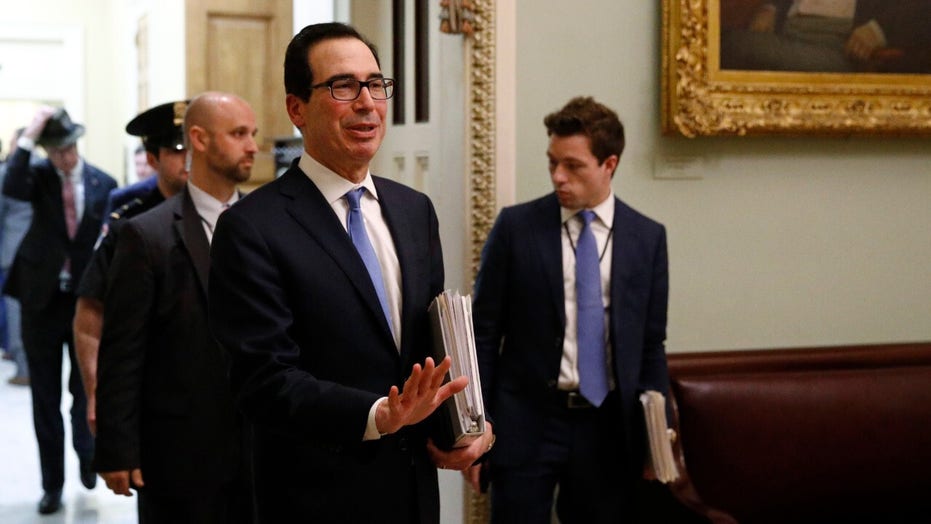 Treasury Secretary Mnuchin pushes back on criticism that part of the package is a slush fund; Mike Emanuel reports from Capitol Hill.

Republicans are accusing Democrats of using the coronavirus pandemic as an opportunity to push unrelated political agendas, as the two sides failed to reach an agreement Sunday night to advance legislation that would provide relief to American businesses and families struggling as a result of the outbreak.

On the Senate floor shortly after noon on Monday, Majority Leader Mitch McConnell lit into Democrats, specifically alleging they were trying to extract concessions from airlines over their "carbon footprint," with the economy hanging in the balance.

“They ought to be embarrassed,” he said. “This is no time for this nonsense.”

Democrats overnight blocked the massive economic rescue package, teeing up new negotiations Monday morning. But issues having nothing to do with coronavirus have become impediments to the relief package, according to a senior Republican aide.

“As Leader Schumer continues to hold up the desperately-needed relief package, the last-minute list of demands from Pelosi’s and Schumer’s ideological wish list are coming into focus,” the aide said.

"This report is correct. Pelosi & Schumer are willing to risk your life, your job, your retirement savings for a radical, left-wing wish list that has nothing to do with this virus," Cotton said. "Disgraceful."

“Not only are these completely unrelated to the coronavirus epidemic, they could prevent companies from participating in the loan programs altogether—directly causing unnecessary layoffs,” the aide said.

After House Majority Whip Rep. Jim Clyburn, was reported by The Hill to have said that this is "a tremendous opportunity to restructure things to fit our vision,” McConnell, R-Ky., warned against using the “Phase 3” coronavirus relief package as a political opportunity.

“That’s not what this is about," McConnell said. "This is not about unrelated policy changes, this is about direct assistance to the American people and to small businesses and to hospitals and others who are in need because we in government at all levels, in order to deal with this pandemic, have basically shut the economy down.”

PELOSI, RETURNING FROM RECESS, ANNOUNCES HOUSE DEMS WILL HAVE THEIR OWN CORONAVIRUS RESPONSE BILL

The Republican aide said the new Democratic demands arose after House Speaker Nancy Pelosi returned to Washington, D.C. from a weeklong House recess. Pelosi said the House would introduce their own bill as she was reportedly seeking a "laundry list" of items to be included in the emergency legislation, including wiping out up to $10,000 in student loan debt per person and securing election-security funding.

Other add-ons that Democrats including Pelosi have pushed for include food security aid, small business loans, and other measures for workers, The Associated Press reported, though these are more closely related to the crisis at hand.

Democrats including Schumer, D-N.Y., also claimed to have problems with the existing draft of the bill, arguing that the plan put forth by Senate Republicans was tilted toward corporations and did too little to help workers and health care providers.

“There were some serious problems with the bill leader McConnell laid down. Huge amounts of corporate bailout funds without restrictions or without oversight -- you wouldn’t even know who is getting the money. Not enough money for hospitals, nurses, PPE, masks, all the health care needs. No money for state and local government, many of whom would go broke. Many other things,” Schumer said.

Earlier Sunday, it had seemed that the two sides were close to an agreement. While McConnell had recognized that there was still "elbowing and maneuvering for room" taking place, the legislation had bipartisan support including from "a lot of rank-and-file Democrats who were involved in drafting it."

Fox News' Mike Emanuel, Gregg Re, Andrew O'Reilly and The Associated Press contributed to this report.