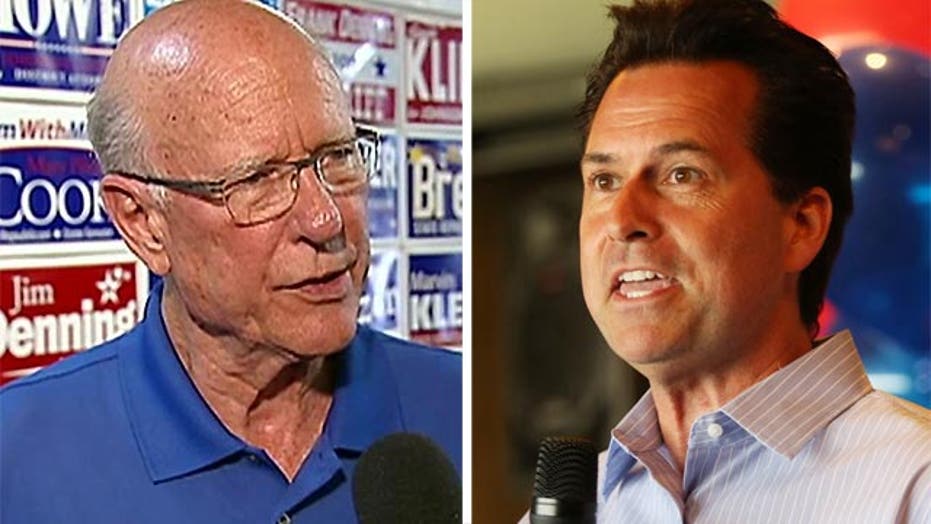 Tea Party-backed candidates this week are hoping to follow in the footsteps of a little-known economics professor named Dave Brat who stunned the establishment with his primary win over then-House GOP Leader Eric Cantor, as they target Republican incumbent senators in Kansas and Tennessee.

Roberts, a three-term senator first elected to the House in 1981, still holds a double-digit lead in the polls, in a race where the candidates’ gaffes and miscues appear as wacky as they are damaging.

Wolf, a radiologist who also happens to be a second cousin of President Obama, has taken heat for Facebook postings of X-rays of gunshots wounds -- while Roberts has awkwardly attempted to laugh off questions about whether he indeed lives in Kansas.

When asked by a New York Times reporter whether he lives in his Dodge City home, or a $300-a month rental elsewhere in Kansas, to maintain his residency, he replied: “I have full access to the [rental’s] recliner.”

Meanwhile, Wolf and his Tea Party supporters have hammered Obama as well as Roberts, while not hiding the unusual Obama family connection.

“Dr. Wolf has stated that if elected to the Senate that his number one goal would be to rise up and stop the president from shredding the Constitution,” the national group Tea Party Express said in its endorsement of Wolf. “The Washington, D.C., establishment is doing everything they can to stop Dr. Wolf because unlike his opponent, they know he won't back down to President Obama's radical agenda.”

The Roberts campaign in the closing days of the primary race has for its part seized on a report that Wolf is being investigated for the macabre Internet postings, in which he appeared to poke fun at people's injuries.

“It is now clear that Milton Wolf is a dangerous choice for Kansas Republicans as he faces a major state investigation,” the campaign said. “Even before news of the investigation broke, polls showed Wolf would lose to a Democrat in the general election. For Republicans fighting to take control of the U.S. Senate, this is a toxic situation.”

Roberts appears to be holding off Wolf in recent polls. A Survey USA poll a few weeks ago showed Roberts with a 20-point lead. However, 12 percent of voters were still undecided, and Wolf had narrowed a 33-point deficit from June.

Though the numbers do not bode well for challengers like Wolf, the politicians are nevertheless getting a serious look in the wake of Cantor's June 10 loss to Brat. Cantor, as political analysts continue to point out, had an internal poll showing him with a 34-point lead before he lost to  Brat. Cantor, after handing over the leadership post to Rep. Kevin McCarthy, R-Calif., is leaving office later this month.

Tea Party candidates have had a mixed record this year. Among other Tea Party-backed victories have been Republican Senate candidate Ben Sasse in Nebraska and West Virginia GOP House candidate Alex Mooney, who won his May primary with spending help from such outside groups as the Madison Fund, the Senate Conservatives Fund and Tea Party Express.

After the 2010 Tea Party wave, however, many of the Tea Party-aligned candidates are now incumbents, like in Michigan. On Tuesday, two Tea Party favorites in that state – GOP Reps. Justin Amash and Kerry Bentivolio -- will be defending their House seats.

Amash, endorsed by the Tea Party Express, appears to have a solid, double-digit lead in the challenge from businessman Brian Ellis.

However, Ellis also has the backing of the U.S. Chamber of Commerce, which earlier in the year made clear its intentions to help defeat congressional incumbents unwilling to “work within the legislative process.”