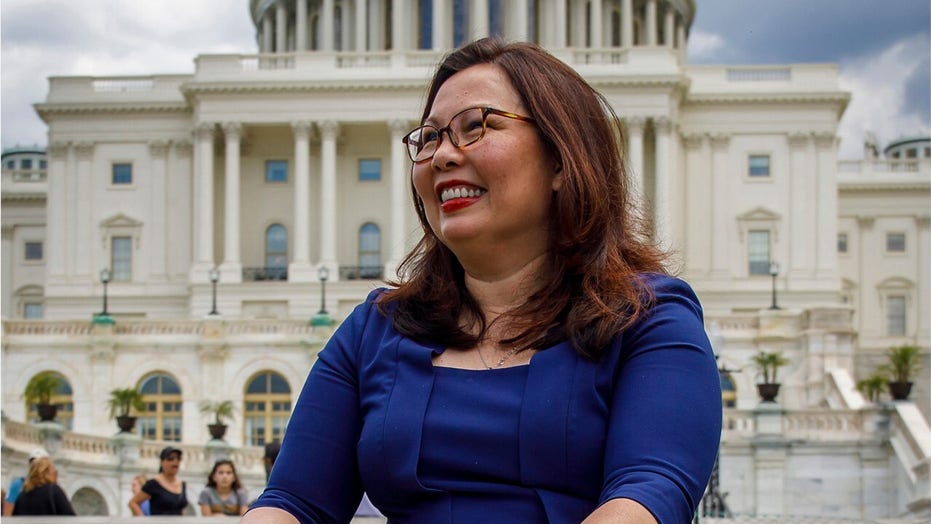 Who is Tammy Duckworth?

As the pressure rises on presumptive Democratic nominee Joe Biden to announce a woman as his running mate, eyes have turned to Illinois Senator Tammy Duckworth. Here’s 5 things you need to know about her.

As focus shifts to who presumptive Democratic nominee Joe Biden will choose as his running mate, Illinois Sen. Tammy Duckworth has reportedly made the shortlist of vice presidential choices.

Here are 5 things to know about the Illinois senator:

She was the first Thai-American woman elected to Congress.

Duckworth assumed her Senate office in 2017, and before that served in the House. She was the second Asian-American woman to serve in the Senate, behind Mazie Hirono, D-Hawaii, a Japanese- born American, and before Kamala Harris, D-Calif., the daughter of an Indian and a Jamaican. She was also the first woman with a disability elected to Congress, the first double amputee and the first senator to give birth while in office.

Duckworth served as a U.S. Army pilot in the Iraq War, where she suffered severe combat wounds. She lost both of her legs and some mobility in her right arm. She was the first female double amputee of the war. But even so, she sought and obtained a medical waiver and continued to train and serve in the Illinois Army National Guard while her husband, Major Bryan W. Bowlsbey, took his turn deploying to Iraq.

Duckworth’s campaigns have been focused on highlighting her veteran experience. She resigned from leading the Illinois Veterans’ Affairs Department to run for the House in 2011 against Republican incumbent Joe Walsh, who became the subject of controversy when he accused Duckworth of politicizing her service and injuries.

“My God, that's all she talks about. Our true heroes, the men and women who served us, it's the last thing in the world they talk about,” Walsh said, later walking back the statement. "Of course Tammy Duckworth is a hero ... I have called her a hero hundreds of times."

Despite her service, she’s long been an outspoken critic of the Iraq War

Duckworth in 2006 called the Iraq War a “mistake” and criticized President George Bush’s handling of it, but said she would deploy again if called.

“I would go again, yeah,” she told the Chicago Tribune in 2007, noting that her prosthesis after a double amputation would likely not yet render her fit for service.

In 2006, Duckworth delivered the Democrats’ rebuttal to Bush’s weekly radio address, saying that Bush and Republicans in Congress had “no plan” but instead offered slogans such as “Mission Accomplished” and “Stay the Course.”

"And anyone who challenges our failed policies, or suggests the need for a new strategy, is accused of `cutting and running,'" she said. "Well, I didn't cut and run, Mr. President. Like so many others, I proudly fought and sacrificed. My helicopter was shot down long after you proclaimed `Mission Accomplished.'"

Duckworth used her rebuttal to recite a frequent critique of her campaign, accusing Bush of taking "his eye off Al Qaeda in Afghanistan to invade Iraq."

As a freshman senator, Duckworth passed three proposed bills into law, earning her the rank of “Exceeds Expectations” as a freshman senator from the Center for Effective Lawmaking, alongside Republican John Kennedy, for the 115th Congress, 2017-2018.