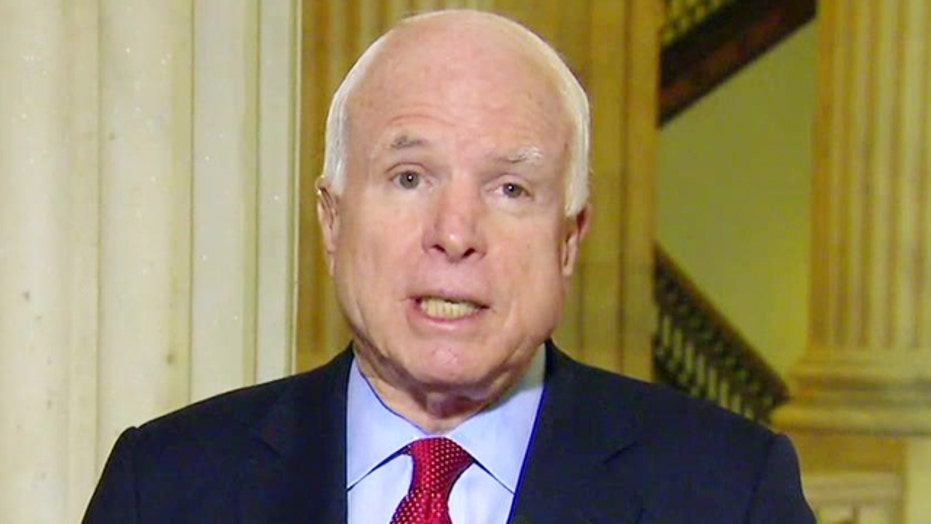 McCain: Taliban attacks will get worse without US forces

Sen. John McCain on the Taliban-led attack on a Pakistan school that left 141 dead, the importance of 'stabilizing' US forces, a potential Jeb Bush 2016 candicacy and his new book

From a convoy strike that killed two U.S. troops near Kabul to the recent massacre of schoolchildren across the border in Pakistan, brazen Taliban attacks have brought renewed concerns that the fight against the insurgency is far from over -- even as President Obama vows to bring the Afghanistan war to a "responsible end" next week.

The Taliban typically launch their fiercest offensives when the cold weather breaks, but have steadily attacked foreigners and coalition targets in advance of that date.

"We're going to see the same movie we saw in Iraq," the Republican senator, and likely next chairman of the Senate Armed Services Committee, told Fox News.

That the Taliban would seek to destabilize the new Afghan government once the U.S. combat mission formally ends is almost a certainty. Marine Gen. Joseph Dunford warned in August, as he stepped down as U.S. commander in Afghanistan, that the Taliban would mount another assault in summer 2015.

Whether such an offensive would scramble Obama's schedule for an orderly U.S. withdrawal, and potentially keep troops there longer than planned, is an open question.

As McCain referenced, the U.S. was pulled back into Iraq after the war technically ended, to respond to the horrific violence inflicted by the rampaging Islamic State. He and others worry about a similar scenario in Afghanistan.

The Taliban have staged more than a dozen attacks targeting foreigners in the past several weeks in Afghanistan. This included a recent attack on a guest house of a California-based charity, in which Taliban gunmen killed a South African family.

And the Taliban staged a shocking and brutal attack on a school in Pakistan days later, killing nearly 150 people, most of them students. In the wake of that attack, Afghan and Pakistani military officials reportedly agreed to forge a new partnership against the Taliban. (Pakistan reportedly plans to execute hundreds of militants, while Afghan forces also have been fighting back -- with one Afghan official claiming more than 150 Taliban were killed over 12 days of fighting.)

Though the school massacre occurred in Pakistan, McCain warned last week that the Taliban will inflict "more of these kinds of heinous outrageous attacks" in Afghanistan unless the U.S. leaves a bigger "stabilizing force" behind, and ties the drawdown to conditions on the ground.

Already, the Pentagon has agreed to leave a larger force behind than planned. Earlier this month, military officials announced an additional 1,000 troops will stay behind for a few months -- leaving a total of about 10,800 in the new year.

But military officials said the reason for the additional troop presence was to fill in for other coalition forces that Washington hopes will arrive by spring 2015. The U.S. still plans to bring the U.S. force size down to 5,500 by the end of next year.

Military officials have downplayed talk of a Taliban resurgence and indicated they are staying the course on the drawdown.

"Nothing has changed about the fact that the combat mission ends at the end of this month and that we're going to begin a new mission in Afghanistan," Pentagon spokesman Rear Adm. John Kirby said after last week's attacks in neighboring Pakistan.

Kirby argued that the Taliban were not able to disrupt this year's elections in Afghanistan and, while acknowledging "sporadic violence "in Kabul, voiced confidence in the ability of Afghan security personnel.

"It is still a dangerous place," Kirby said, adding that's why the U.S. is working on supporting Afghan security forces going forward.

"Even as our combat mission ends, our commitment to Afghanistan endures," the president said.

While U.S. troops will not be on missions to hunt down Taliban members, Obama has authorized remaining U.S. troops to attack the Taliban if they pose a threat to U.S. military personnel.

But Lisa Curtis, senior research fellow at the Heritage Foundation's Asian Studies Center, echoed McCain in saying the White House should consider a "ground-based instead of a political timeline" for withdrawal.

Curtis said pressure to do so will increase next year with Republicans in full control of Congress, and particularly with McCain at the helm of the Senate Armed Services Committee.

Curtis praised U.S. and Afghan forces for, so far, keeping the Taliban from gaining swaths of territory and voiced optimism for cooperation with Afghanistan's new president, Ashraf Ghani.

Afghanistan is just one example of where Obama is having a challenging time extracting U.S. forces.

After authorizing airstrikes in Iraq earlier this year to take on ISIS and protect civilians, the administration announced the deployment of another 1,300 troops to Iraq. They are expected to leave for Iraq in late January, with a mission of training and assisting Iraqi security forces.

The U.S. military also is engaged in air missions over Syria with its Arab partners. Claims Wednesday that ISIS fighters shot down a Jordanian warplane and captured the pilot underscore the risks of even those missions for coalition forces.

Curtis suggested the Iraq example hangs over the transition in Afghanistan.

"The American people are war weary [in Afghanistan] and just tired of fighting wars in general," she told FoxNews.com. "But at the same time, they are nervous about what they've seen in Iraq."