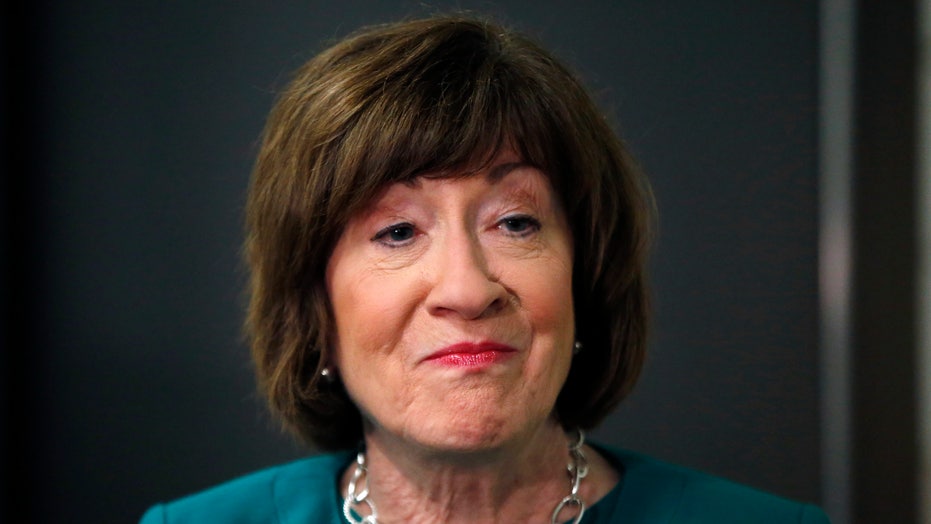 Sen. Susan Collins, R-Maine, released a statement on Thursday to clarify her stance on President Trump's upcoming impeachment trial and claimed her past comments have been taken out of context and misunderstood.

"There has been a lot of mischaracterization and misunderstanding about my position on the process the Senate should follow for the impeachment trial," the statement began. "Rather than have my position relayed through the interpretation of others, I wanted to state it directly."

Collins, who is considered a moderate, shared her views on how the process should play out and recommended that it mirror former President Bill Clinton's impeachment trial from 1999, to allow for bipartisan input.

"That process [from 1999] provided for the opportunity for both sides to state their case and for Senators to ask questions through the Chief Justice," she wrote.

"At the conclusion of that phase of the 1999 trial, the Senate voted on a motion to subpoena witnesses and admit additional materials after the case had been heard and the questions had been posed," Collins continued. "I voted in favor of that motion subpoenaing witnesses."

She also said it would be best if senators from each party were allowed to ask questions before the chamber holds an up or down vote about the calling of witnesses and the subpoenaing of documents. Collins added that she would not support any action until lawmakers had a chance to pose questions.

"While I need to hear the case argued and the questions answered, I tend to believe having additional information would be helpful," the statement read. "It is likely that I would support a motion to call witnesses at that point in the trial just as I did in 1999."

The Maine Republican claimed that she has not made a decision about which witnesses to call and is open to hearing from both parties, before forming a final conclusion.

"I have not made a decision on any particular witnesses," she wrote. "When we reach the appropriate point in the trial, I would like to hear from both sides about which witnesses, if any, they would like to call."

Collins, 67, announced her plans to seek reelection to the Senate last month. This would be her fifth term if reelected. She won her first U.S. Senate race in 1996 and most recently defeated Democrat Shenna Bellows in 2014.

Despite her moderate track record, Democrats will likely seek to flip the seat by focusing on her support for Trump's tax legislation in 2017 and her pivotal role in helping confirm Supreme Court Justice Brett Kavanaugh in 2018.

Following the swearing-in of Chief Justice John Roberts and the senators who will serve as jurors on Thursday, McConnell said the trial will resume on Tuesday at 1 p.m. EST.