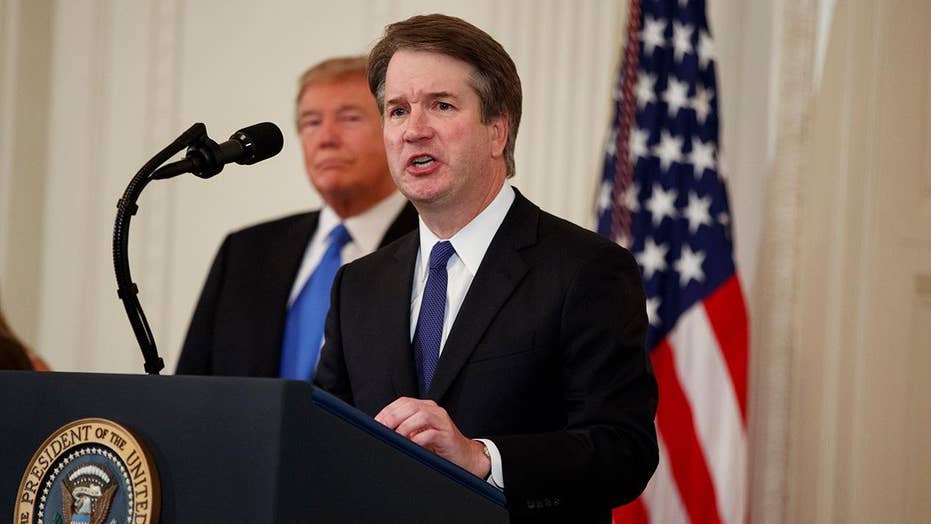 Regardless of whether Senate Republicans succeed in confirming embattled Supreme Court nominee Brett Kavanaugh, it is increasingly likely that procedural hurdles will prevent him from taking his seat on the bench prior to the start of the court's term Oct. 1 -- a fixed date set by federal law.

However, legal experts tell Fox News, the immediate impact of any delay filling the ninth seat on the Supreme Court may be minimal. The upcoming Supreme Court term is "fairly benign when it comes to hot-button issues," Adam Feldman, a Supreme Court expert who runs the blog Empirical SCOTUS, told Fox News.

"This makes me think that the justices were aware of [Justice Anthony] Kennedy's likely departure when they starting granting cases for this term," he added.

"The caseload for OT 2018 is fairly benign when it comes to hot-button issues."

And, as the confirmations of Justices Neil Gorsuch and Samuel Alito demonstrated, a justice who arrives at the Supreme Court mid-term can get up to speed quickly, and can cast key votes in cases that have already been argued, the experts have said.

The Supreme Court also has shown a willingness to delay arguments and decisions on cases that might end up deadlocked until a ninth justice can be seated, as well as setting cases for re-argument in future terms.

In 2016, when Justice Antonin Scalia died unexpectedly, the Supreme Court bucked its usual procedure of hearing cases in the order in which they were granted certiorari to review a lower court's decision.

Instead, justices opted to postpone arguments on several important cases in the hopes of avoiding a 4-4 tie that effectively would uphold the lower courts' decisions by default. Administrative matters such as whether to delay cases are typically decided by a vote of justices; four votes are required to grant certiorari to a case.

"The term after Justice Scalia died, the Court took forever to schedule the most controversial cases for argument—that is, they just didn’t schedule them, month after month after month, even as cases granted later were scheduled and argued," John Elwood, a prominent Washington, D.C. law firm partner and former senior Justice Department lawyer who has argued several cases before the Supreme Court, told Fox News.

For example, the now-widely known case Masterpiece Cakeshop v. Colorado Civil Rights Commission, which pitted a Colorado baker against local officials who argued that his religious preference against baking a cake for gay couples was illegal, lingered for months before the court took it on. Arguments in the case were delayed repeatedly before Gorsuch was confirmed -- a move that legal observers said isn't uncommon when a new member joins the court.

The Supreme Court, with Gorsuch as the deciding vote, this past summer ruled that Colorado officials had acted with improper animus against religious beliefs when they penalized the baker for refusing service to the gay couple.

The justices may take a similar approach for the upcoming term, pending the uncertainty over Kavanaugh's fate.

"My sense is that they will proceed without taking on cases in very contentious issue areas until they know with certainty who will fill the open spot on the court," Feldman said. He noted that Chief Justice John Roberts "seems to be very concerned about 4-4 decisions and, from the other justices' own words, Roberts is savvy at finding means of consensus. "

For his part, Elwood cited a handful of upcoming cases that might be deadlocked without a ninth justice.

"I could see some of the three arbitration cases being split 4-4 if there is no ninth justice—those cases are sometimes contentious," Elwood told Fox News, referring to a series of cases involving the Federal Arbitration Act and related matters. One case, for instance, is set to determine whether federal law permits courts to decline to enforce arbitration agreements that allow an arbitrator to determine issues of arbitrability, if the court independently determines any such claim of arbitrability is meritless.

Another major case implicating the Takings Clause of the Constitution, Knick v. Township of Scott, is scheduled for arguments on Oct. 3 and has the potential to result in a 4-4 split.

The case "asks to overrule a precedent that makes it harder to bring takings claims in federal court, and it’s scheduled to be argued in October, so it’s among the likeliest to be argued without the full complement of justices," Elwood said.

"I could also see the upcoming case on overruling the so-called 'dual sovereigns doctrine' (which allows both state and federal authorities to prosecute someone for the same offense without running afoul of the Ex Post Facto Clause) potentially being divided 4-4, but not on ideological lines," Elwood added.

Feldman also cited Madison v. Alabama, which is currently set for argument Oct. 2, as a potentially "ideologically divisive" case. The court will resolve, among other issues, whether a state can constitutionally execute a prisoner suffering from a mental disorder who, as a result of the disorder, lacks any memory of committing the crime.

Still, Republicans have been holding out hope that any delay in getting Kavanaugh seated wouldn't be long. Friday is most likely the earliest the Senate Judiciary Committee could reasonably vote on Kavanaugh's confirmation, given that a hearing has been scheduled for Thursday into sexual misconduct allegations against Kavanaugh, Senate sources tell Fox News.

Senate Majority Leader Mitch McConnell, R-Ky., would prepare a cloture petition to end debate on Kavanaugh's nomination. But that couldn't be filed until the next day -- which would ordinarily be Monday, Oct. 1, which is legally established as the first day of the next Supreme Court term.

McConnell theoretically could fast-track the cloture vote for Saturday, which would entail unusual weekend sessions. By rule, efforts to limit debate and overcome a filibuster in the Senate must lay over for one day before the procedural vote. If a cloture were filed on Saturday, then, the layover day would be Sunday.

The vote to halt the filibuster would then be taken on the following day, Oct. 1. Under current Senate precedent to break a filibuster on Supreme Court nominees, 51 senators must vote to end debate. Still, because of procedural delaying tactics, the vote likely would not be able to occur until Oct. 2 at the earliest.

Republicans and media watchers have condemned The New Yorker for publishing uncorroborated accounts of alleged sexual misconduct against Kavanaugh on Sunday, and key details have shifted in the story of Christine Blasey Ford, another Kavanaugh accuser. But even as they maintain that the decades-old accusations against Kavanaugh are last-minute smears, however, Republicans have acknowledged that a quick vote carries its own political risks.

JUDGE JUDY WEIGHS IN, URGES SENATORS TO LISTEN TO 'BOTH SIDES'

With a narrow 51-49 majority in the Senate, GOP senators cannot afford more than a single defection. Sen. Jeff Flake, R-Ariz., has said that Ford, the first woman to allege misconduct by Kavanaugh, should testify before the Senate Judiciary Committee prior to any vote on Kavanaugh.

That sentiment has been echoed by Maine moderate Sen. Susan Collins, considered a potential swing vote. Collins has sharply criticized Democratic senators for keeping the allegations against Kavanaugh a secret until late in the process, saying their behavior was "not fair" to either Kavanaugh or Ford.

But she has joined other Republicans, including President Trump, in saying that she wants to hear from Ford without rushing to put Kavanaugh on the bench.