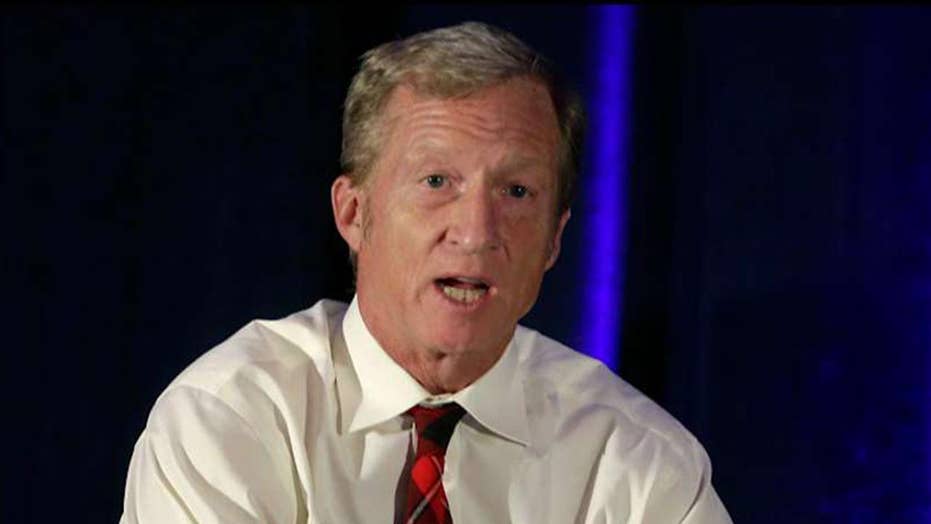 Just days after a Fox News poll indicated that businessman and activist Tom Steyer was surging in South Carolina polls -- going from 4 percent in October to 15 percent by the first week of January -- the Democratic hopeful took his first bus tour of the “First in the South” primary state with stops in Florence, Orangeburg and Columbia.

Tom Steyer speaks at a meeting with Black Leadership in Charlotte, N.C., Jan. 17

When Steyer was asked if the poll boost had anything to do with the timing, he told Fox News after his Friday night event (which was technically just north of the border in Charlotte, N.C.) that it “was programmed a long time ago,” and that he ”was always planning to be in South Carolina, which is a very important early primary state.” And asked if the Fox News polling changed his strategy in the early states, he stated the obvious: “Of course I'll be in Iowa and New Hampshire.”

The goal of the “People Over Profit” bus tour, according to a press release, was to “discuss how we can pursue economic and environmental justice by addressing and undoing the purposeful exclusion of communities of color.” One of Steyer’s major pitches to these communities is reparations. He told every crowd on the tour that he “is the only candidate who will say they are for reparations”

But in fact, the difference between him and other Democrats is nuanced on the issue. He told the crowd of thousands at “Day at the Dome” that in a Steyer presidency, “on the first day, we will have a formal commission on race to retell that 401 years with a solutions basis so we can actually repair what's happened.”

Every other top their candidate has called for a commission to study reparations. Complicating his claim even more, Patrick (who spoke after Steyer at the rally) on Monday released his Equity Agenda, which calls for “tangible” reparations, though he wants a congressional commission to study it first. Back in December, before she dropped out of the race, Marianne Williamson released a comprehensive reparations plan to the tune of $500 billion.

Tom Steyer chats with members of the Buffalo Soldiers bike gang at the Thunderbird Inn Buffet in Florence, S.C., Jan. 19.

Despite the embellishment, his crowds seemed enthused by the idea of reparations, frequently erupting in applause. Keenan Coleman, an avid Steyer supporter, alluded to reparation unprompted while speaking with Fox News. “If the playing field is level, then we can see what's really going on. There's been a history of just kind of pushing everything else to the side and never really giving what needs to be given to those who don't have. And that's not really a civil thing, it's more financial because at this point poor people come in all colors, shapes and sizes,” he said.

Mark Riffle, who came to the rally undecided, said he found Patrick impressive. When asked about reparations he called them a great idea but added, “I can't imagine how you begin to apply something like that. But he's [Steyer] got a good record for being a strong businessman. So maybe he can make those numbers work.” Almost everyone Fox News spoke with at the rally was in favor of reparations in some form, no matter which candidate they were supporting.

Ironically, the candidate that Steyer supporters mentioned most as their other potential preference is former Vice President Joe Biden, who took a hard stance against reparations in 1975 saying, “I’ll be damned if I feel responsible to pay for what happened 300 years ago.” Biden’s 2020 campaign has yet to take a stance on the issue.

South Carolina has been called Biden’s "firewall" by many analysts, and Steyer faces an uphill battle for its key demographic, African-American voters. In that same January Fox News Poll, the racial breakdown still showed a huge split between Biden and his competitors, with the former VP garnering a whopping 43 percent of the black vote, and Steyer trailing next at 16 percent.

But Steyer is surrounding himself with endorsers who disagree with the polling. Johnnie Cordero, chairman of the Democratic Black Caucus in South Carolina, endorsed Tom Steyer publicly on Saturday night before his town hall. And when asked about Biden, Cordero said: “I don't think it's a firewall. I believe that's a misnomer.”

Johnnie Cordero, Chair of the Democratic Black Caucus in SC, endorses Tom Steyer outside of his "People Over Profits" town hall in Florence, S.C., Saturday, Jan. 18.

Steyer is investing in his ground game in South Carolina, with 93 staffers as of Monday night, up from 82 last week. His South Carolina communications director, Tiffany Vaughn, told Fox News that they’ve “seen in upwards 250 new volunteers since Christmas and that number is growing every day.”