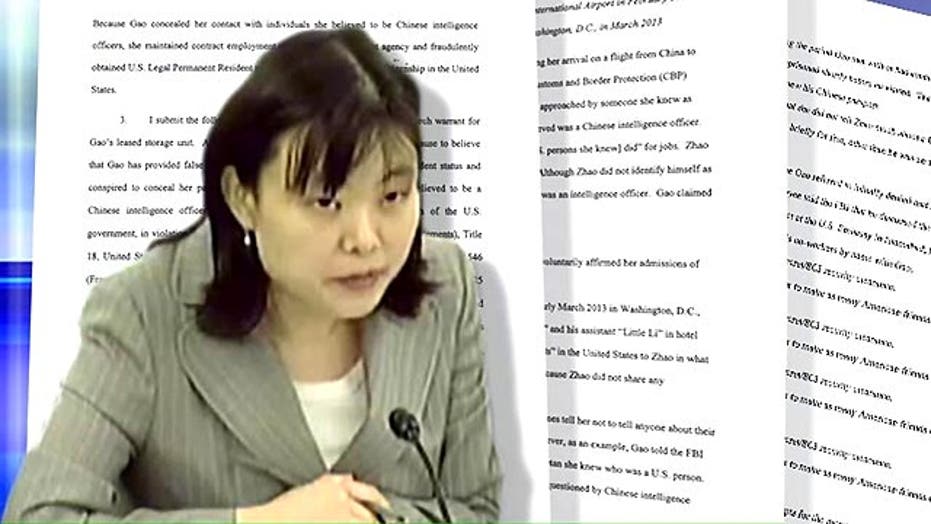 Were US secrets bought and sold under government's nose?

Newly unsealed court documents obtained by Fox News show a State Department contractor allegedly was paid thousands by an individual thought to be a Chinese agent in exchange for information on Americans -- but despite an FBI probe, the Justice Department declined to prosecute.

A November 2014 FBI affidavit, filed in the U.S. District Court for the District of Maryland, shows the bureau investigated the contractor for her admitted contact with individuals she believed to be Chinese intelligence officers.

The affidavit from agent Timothy S. Pappa states the translator, Xiaoming Gao, was paid "thousands of dollars to provide information on U.S. persons and a U.S. government employee."

According to the documents, she admitted these meetings took place in hotel rooms in China for years, where she reported on her "social contacts" in the U.S. to an individual who went by the name of "Teacher Zhao."

The detailed affidavit even goes on to say the translator briefly lived, "for free," with a State Department employee -- who held a top-secret clearance and designed high-security embassies, including the U.S. compound in Islamabad, Pakistan.

The State Department employee, who was not named, initially told the FBI he didn't discuss his job with Gao, but later changed his statement.

According to the documents, Gao also told the FBI -- during interviews in 2013 -- that she once told "Teacher Zhao" about the travel plans of an American and ethnic Tibetan. This person told the FBI he ended up being interrogated by Chinese intelligence officers during a trip to Tibet, and a member of his family was imprisoned.

Yet the U.S. attorney's office in Washington, D.C., which oversaw the case, recently declined to prosecute, allowing the documents to be unsealed. The office offered no further comment. The FBI also is saying nothing beyond the court documents that were filed to search a storage unit in suburban Washington, D.C.

On its face, a former senior Justice Department official said the decision not to prosecute is perplexing, because the case was unlikely to reveal investigative sources and methods.

"It's not clear to me, based on the court files that were unsealed, how a prosecution of this person could possibly have compromised U.S. intelligence gathering," Thomas Dupree, former deputy assistant attorney general under the George W. Bush administration, told Fox News. "If it jeopardizes or threatens to disrupt relations with another country, so be it. That you have to draw the line somewhere, and that we need to send a message that this sort of conduct and activity simply will not be tolerated."

The State Department confirmed Xiaoming Gao worked for the Office of Language Services over a four-year period beginning in June 2010. This would have covered the tenures of former Secretary of State Hillary Clinton and sitting Secretary John Kerry.

"She was employed as a contract interpreter until February 2014, is not employed here anymore. And so any additional questions on this, I'd refer you to the FBI," spokeswoman Marie Harf said.

When told the FBI was referring Fox News' questions back to State, Harf responded: "I'm referring you back to them."

The documents do not fully explain Gao's side of the story.

Emails and phone calls to the consulting firm, which the translator listed on the web as her employer, have gone unanswered. Fox News extended an invitation to discuss the allegations. No attorney of record was filed with the court.