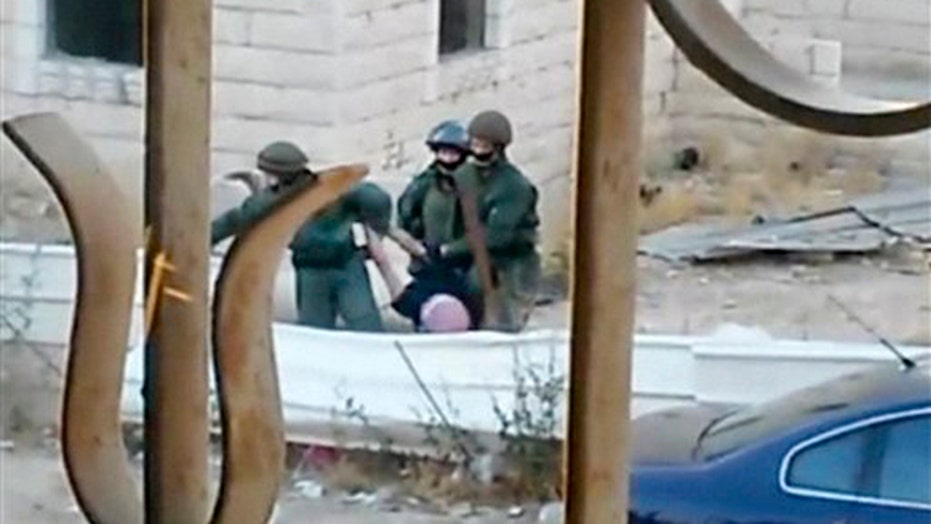 State Dept. wants to investigate alleged beating of US teen

The State Department confirmed Saturday that American citizen Tariq Khdeir is being held by Israeli authorities in Jerusalem and called for an investigation into reports he was severely beaten while in police custody, amid escalating violence in the Middle East country.

Agency spokeswoman Jen Psaki said an official from the U.S. Consulate General in Jerusalem this weekend visited the 15-year-old Khdeir.

Khdeir’s Arab cousin, 16-year-old Abu Khdeir, was recent seized from his home and found dead in a forest Wednesday.

Palestinians immediately accused Israeli extremists of killing him to avenge the deaths of three Israeli teens who had been abducted and killed in the West Bank.

Israeli police said an investigation is still underway and they have not yet determined who killed the boy or why.

Tariq Khdeir, who goes to school in Florida, was beaten by police during clashes on Thursday ahead of his cousin’s funeral.

His parents, Suha and Salah, say Tariq was detained but had been treated at an Israeli hospital. They released photos showing his face swollen and badly bruised.

Tariq's father said he witnessed his son's arrest and insisted the boy was not involved in the violence.

The Israeli police say the youth resisted arrest and attacked police officers. He was detained with a slingshot in his possession used to hurl stones at police, along with six other protesters, including some armed with knives, police said, adding that several officers were hurt in that specific protest, one of many that day.

The chaos began after the three Israeli teenagers, one of whom was a U.S. citizen, were abducted in the West Bank on June 12, sparking a huge manhunt that ended with the gruesome discovery of their bodies earlier this week.

An autopsy showed Khdeir burned to death, officials said Saturday, while Palestinian militants fired two rockets toward a major southern city deeper into Israel than any other attack in the current round of violence.

The Israeli military said its "Iron Dome" defense system intercepted the rockets that were aimed at Beersheba. The military also said at least 29 other rockets and mortars were fired from the Gaza Strip at Israel over the weekend. It said it had retaliated with air strikes on militant sites in Gaza.

Clashes between Israeli police and Palestinian protesters spread early Saturday from Jerusalem to Arab towns in northern Israel as hundreds of people took to the streets and threw rocks and fire bombs at officers who responded with tear gas and stun grenades, police said.

Palestinian Attorney General Abdelghani al-Owaiwi said he received initial autopsy results from a Palestinian doctor who was present at the autopsy in Tel Aviv. He said it shows that Khdeir, whose death has sparked large protests in his east Jerusalem neighborhood, suffered burns on "90 percent of his body."

His account provided the first details of the preliminary findings to be made public. The Israeli Health Ministry could not be reached for comment.

The autopsy found evidence that Khdeir had breathed in the flames as burns were found inside his body, in his lungs, bronchial tubes and his throat, al-Owaiwi said.

He also said the young man had suffered wounds on the right side of his head apparently from impact with a rock or another hard object.

Israeli leaders have widely condemned the killing of the Palestinian youth, and Prime Minister Benjamin Netanyahu vowed those responsible would be brought to justice.

Near the town of Qalansawe, protesters also pulled over a car driven by an Israeli Jew on Saturday, pulled him out and set the vehicle on fire, the police spokeswoman also said. The driver was not injured. Several other Israeli cars were also torched, she said. Dozens of protesters were arrested across the country throughout the day.

Protests subsided by noon but resumed in the evening with violent demonstrations in several Arab towns in the north of the country, police said.

Israeli Arabs, unlike Palestinians in the West Bank and Gaza Strip, hold citizenship rights. But they often face discrimination and mostly identify with the Palestinians. Even so, violent riots like these are rare.

Amateur video of what Tariq’s father said was the beating of his son aired on a local television station, and he said he could recognize his son from his clothing.

The channel that aired it, Palestine Today, is funded by Iranian-backed Islamic Jihad, a militant group that has carried out suicide bombings and other attacks aimed at civilians.

Other footage shows uniformed men dragging someone on the ground.

The face of the person cannot be seen in either video, and the circumstances leading up to the beating are not shown.

Israel's justice ministry said an investigation had been opened over the footage.

The rocket fire on Beersheba Saturday was the first since 2012, which came during intense fighting between Israel and Gaza militants.

Israel launched a massive crackdown on the Islamic militant group Hamas after the abduction of the Israeli teens, while retaliatory Palestinian rocket attacks and Israeli air strikes intensified. The military says Palestinian militants have fired more than 150 rockets at southern Israel, and it has responded with air strikes on more than 70 targets in Gaza.