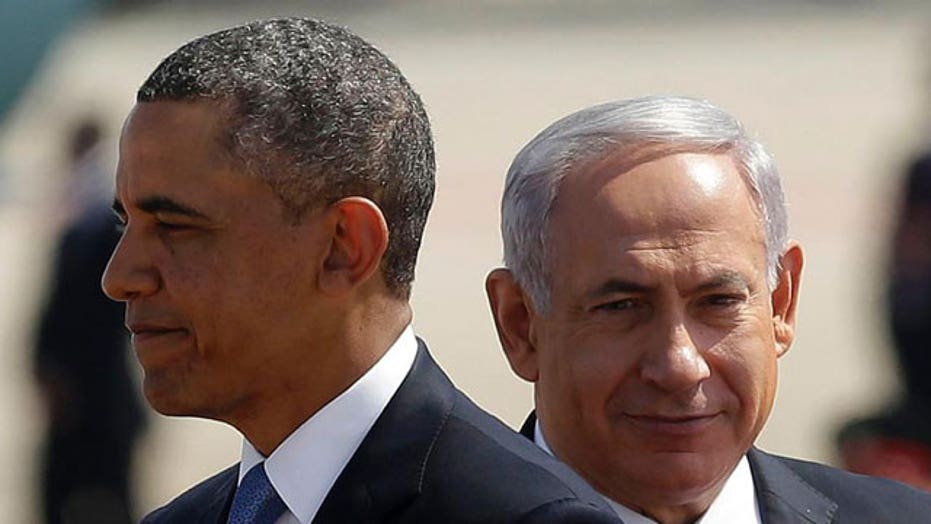 Benjamin Netanyahu on Thursday seemed to dial back his pre-election remarks opposing the creation of a Palestinian state -- but that did little to ease the emerging standoff between his government and the Obama administration, which reportedly is considering going to the U.N. to pressure Israel on the matter.

The Israeli prime minister, shortly before Tuesday's election, had said he would not allow a Palestinian state on his watch.

But on Thursday, Netanyahu claimed he hadn't actually changed his position.

"I didn't retract any of the things I said in my speech six years ago, calling for a solution in which a demilitarized Palestinian state recognizes a Jewish state," Netanyahu told Fox News' Megyn Kelly.

He clarified that he thinks the conditions for a two-state solution, "today, are not achievable" -- since he said Palestinian leaders do not accept Israel as a Jewish state and terrorists could occupy any territory Israel withdraws from.

But he also told MSNBC he ultimately wants "a sustainable, peaceful two-state solution" if circumstances change.

The latest comments, however, were greeted with skepticism by Obama administration officials.

He made clear the administration is focusing on what Netanyahu said before the election, and not on what he's saying now. Earnest accused Netanyahu of "backing away" from the commitment to a two-state solution with those earlier comments.

"It does raise questions about his commitment to that solution," Earnest said.

In a stark warning, Earnest said the position the U.S. historically has taken before the United Nations -- protecting Israel from intervention -- was based on the idea of a two-state outcome. He said that foundation has now been "eroded" and the U.S. is reevaluating its position.

The White House said late Thursday that Obama had called Netanyahu to congratulate him on his win and reiterated the U.S. commitment to a two-state solution "that results in a secure Israel alongside a sovereign and viable Palestine."

Earnest's comments came amid reports that the Obama administration is indeed considering looking to the U.N. to pressure Israel into a peace deal with the Palestinians, despite historically blocking such action at the world body.

Foreign Policy reported Thursday that the U.S. is looking at supporting a U.N. Security Council resolution calling for peace talks and a comprehensive settlement.

"The more the new [Israeli] government veers to the right the more likely you will see something [at the United Nations] in New York," a Western diplomat told Foreign Policy.

Netanyahu told Fox News he hopes the Obama administration is not seriously considering this.

"I hope that's not true, and I think that President Obama has said time and time again, as I've said, that the only path to a peace agreement is an agreement, a negotiated agreement.  You can't impose it," he told Fox News. "You can't force the people of Israel, who've just elected me by a wide margin, to bring them peace and security, to secure the State of Israel, to accept terms that would endanger the very survival of the State of Israel. I don't think that's the direction of American policy. I hope it's not."

But Obama administration officials are leaving the door open.

After the election, the Obama administration made clear it still supports a two-state solution and would work to achieve it -- somehow. Officials would not say whether that means going through the United Nations. But they didn't rule it out, either.

"We haven't made a decision," State Department spokeswoman Jen Psaki said Thursday. "It's just natural that we would be looking at the different options."

"Based on PM Netanyahu's comments we will need to reevaluate our position and the way forward. We're not going to get ahead of any decisions about what the United States would do with regard to potential action at the U.N. Security Council," a senior administration official also told Fox News on Thursday.

The potential shift comes after Netanyahu's Likud Party won big in Tuesday's election -- positioning him for a third consecutive term as prime minister.

The consideration of going to the U.N. underscores the growing rift between the Obama and Netanyahu administrations. The two already at odds over a pending Iran nuclear deal, Netanyahu staked out a new area of disagreement with his Palestinian state comments.

The prospect of U.N. interference already is raising the hackles of the Israelis.

After a U.N. spokesman on Wednesday said it is "incumbent" on the Israelis to pursue a peace deal and support the creation of a Palestinian State, among other conditions, Israel's ambassador to the U.N. Ron Prosor fired back.

"The United Nations may disagree with the policies of the Israeli government, but there is one fact that can't be disputed -- that Israel is the only democracy in the Middle East," he said. "If the U.N. is so concerned about the future of the Palestinian people, it should be asking why President Abbas is in the tenth year of a five-year presidential term or why Hamas uses the Palestinian people as human shields."

The Palestinians had urged the U.N. Security Council to accept a resolution demanding that the Israelis leave Palestinian territories. The U.S. opposed it.

Foreign Policy reported, however, that France is now pressing the U.S. to take another look at a separate resolution, which they offered, calling for resumed peace talks toward a final deal.

Diplomats told Foreign Policy there are still significant differences between the U.S. and French approaches, but suggested they could be resolved. Foreign Policy reports that the U.S. delegation also could simply abstain on a U.N. resolution vote.

The dynamic on the council also has changed in recent months.

When the Security Council last voted on the Arab nation-backed measure to set a deadline for peace talks and Israel's withdrawal from the territories, supporters could not secure the nine votes needed for adoption from the 15-member council -- meaning the U.S., which opposed it, did not have to exercise a veto to block it. However, with Venezuela now on the council, supporters could have the needed nine votes today -- forcing the U.S. to make a decision on whether to veto.