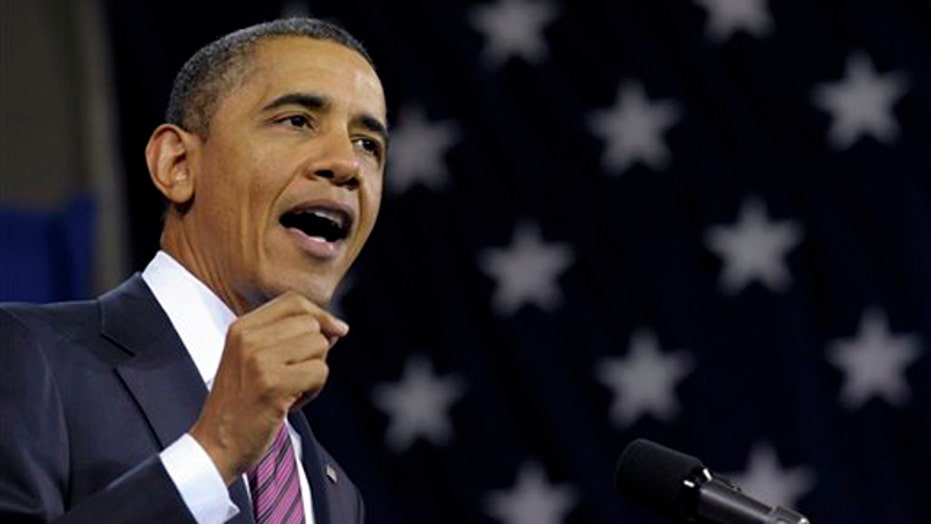 What is political fallout for president?

Some members of President Obama's own party are voicing opposition to his administration's controversial rule that religious schools and hospitals must provide contraceptive coverage for their employees.

As Democratic women lawmakers put up a united front in defending the administration, other Democrats are split over the new birth control policy, which has been condemned by Republicans as an "unambiguous attack on religious freedom in our country."

Sen. Joe Manchin, D-W.Va., who faces re-election in November, sent a letter to Obama complaining that the mandate is a "direct affront to religious freedoms."

Rep. Dan Lipinski, D-Ill., said in January that the decision "violates the long-standing tradition of protection for conscience rights in federal law."

Tim Kaine, a Catholic seeking the Senate seat in Virginia, said he supports contraceptive coverage but thinks there should be a broader exemption for religious organizations.

"Women's health care should not depend on who the boss is," said Illinois Rep. Jan Schakowsky.

The White House pushed back in the face of the political firestorm, arguing that Obama was sensitive to the objections and looking for a way to allay the concerns. Sen Frank Lautenberg of New Jersey said Obama discussed the issue during a closed-door retreat Wednesday with Senate Democrats.

"He affirmed his view," Lautenberg said. "He's sticking by what he said, and he said we should be very careful to explain that an exception was made for those that have the religious objections ... Otherwise, (contraception) is going to have to be supplied."

The fight over the administration mandate escalated as House Speaker John Boehner accused the administration of violating First Amendment rights and undermining some of the country's most vital institutions, such as Catholic charities, schools and hospitals. He demanded that Obama rescind the policy or else Congress will.

"This attack by the federal government on religious freedom in our country cannot stand, and will not stand," Boehner, a Catholic and Ohio Republican, said in a floor speech rare for the speaker.

The contentious issue has roiled the presidential race and angered religious groups, especially Catholics, who say the requirement would force them to violate church teachings and long-held beliefs against contraception.

It also has pushed social issues to the forefront in an election year that has been dominated by the economy. Abortion, contraception and any of the requirements of Obama's health care overhaul law have the potential to galvanize the Republicans' conservative base, critical to voter turnout in the presidential and congressional races.

Clearly sensing a political opening, Republicans ramped up the criticism. Shortly after Boehner spoke, GOP senators gathered on the other side of the Capitol to hammer the administration and insist that they will push ahead with legislation to undo the requirement.

The issue is not contraception, said Sen. Marco Rubio, R-Fla., but "whether the government of the United States should have the power to go in and tell a faith-based organization that they have to pay for something that they teach their members shouldn't be done. It's that simple. And if the answer is yes, then this government can reach all kinds of other absurd results."

Several Senate Democrats said they would challenge any effort to reverse the policy.

Sen. Barbara Boxer, D-Calif., pointed out that for about 15 percent of women, birth control pills are used to treat endometriosis and other conditions.

"It's medicine and women deserve their medicine," she said.

The White House, facing a public and political outcry, engaged in damage control, circulating letters and statements from outside groups defending its position.

Administration officials had signaled on Tuesday that a compromise was possible and made clear Wednesday it was still looking for a way to deal with the issue.

"The president is committed, as I've tried to make clear, to ensuring that this policy is implemented so that all American women have access to the same level of health care coverage and doing that in a way that hopefully allays some of the concerns that have been expressed," said White House spokesman Jay Carney, who added, "We're focused on trying to get the policy implementation done in the right way."

Options could include granting leeway for a church-affiliated employer not to cover birth control, provided it referred employees to an insurer who would provide the coverage.

Another idea, previously rejected by the administration, calls for broadening the definition of a religious employer that would be exempt from the mandate beyond houses of worship and institutions whose primary purpose is to spread the faith. That broader approach would track a definition currently used by the IRS, bringing in schools, hospitals and social service agencies that deal with the general public.

In a conference call, Rep. Lois Capps, D-Calif., who said she spoke as a nurse, mother and grandmother, pointed out that 28 states have similar rules on coverage for birth control. Schakowsky pointed out that the rule affects nurses, secretaries and janitorial staff who may not be Catholic.

Rep. Gwen Moore, D-Wis., said the church "can't impose its religious views on people and whether they can have health care."

Fox News' Trish Turner and The Associated Press contributed to this report.