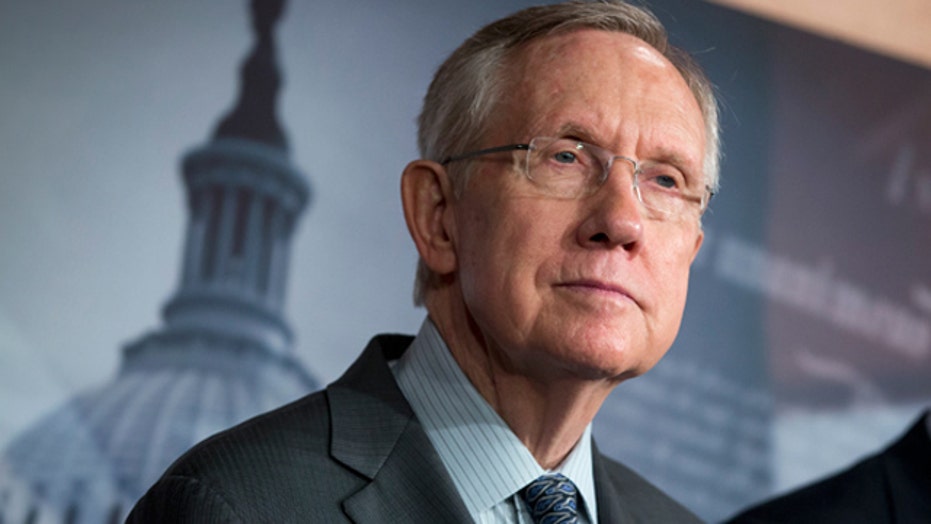 Chuck Rocha and Katrina Pierson weigh in on potential candidates

Senate Minority Leader Harry Reid is no Joe Biden, but the Nevada Democrat has certainly offered his share of gaffes, insults and wacky comments over the years.

Indeed, in Reid -- who on Friday announced his retirement after more than three decades in Washington -- Capitol Hill stands to lose not only a battle-hardened, partisan warrior, but a reliable (and sometimes eye-popping) source of candor. Here are some highlights from the “Reidisms” reel:

Praising the opening of the Capitol Visitor Center in 2008, Reid said the new building would help minimize the smell of tourists visiting the Capitol. "My staff has always said, 'Don't say this,' but I'm going to say it again because it's so descriptive because it's true," Reid said at a dedication ceremony for the long-delayed visitor center adjacent to the Capitol. "In the summertime, because [of] the high humidity and how hot it gets here, you could literally smell the tourists coming into the Capitol."

The Iraq war is ‘lost’

Reid took heat for his assessment that the Iraq war was “lost” in early 2007. “This war is lost and the surge is not accomplishing anything as indicated by the extreme violence in Iraq,” the Democrat told reporters back in April 2007 amid a funding debate. Republicans called his pronouncement demoralizing for U.S. troops on the battlefield.

Obama ‘light-skinned’ with ‘no Negro dialect’

According to the book "Game Change," which chronicled the 2008 presidential election, Reid privately described President Obama as a "light-skinned" African American "with no Negro dialect, unless he wanted to have one.” Reid personally phoned the president to apologize and said he regretted using a “poor choice of words.”

Ted Kennedy's death is ‘going to help us’

In an August 2009 interview with the Reno Gazette-Journal, Reid pondered the impact of Sen. Ted Kennedy's death on Democrats' ongoing push for health care reform. "I think it's going to help us," Reid told the paper, saying the Massachusetts Democrat was an inspiration on health care. "That was the issue of his life and he didn't get it done."

George W. Bush ‘is a loser’

Reid was discussing then-President George W. Bush's policies with a group of high school juniors in Nevada when he put the man down big time. "The man's father is a wonderful human being," Reid said, according to a 2005 Washington Post report that cited the Las Vegas Review-Journal. "I think this guy is a loser."

Asians ‘smarter than anybody else?’

Last August, Reid raised eyebrows for some politically incorrect jokes he made during a speech to the Las Vegas Asian Chamber of Commerce. "I don't think you're smarter than anybody else, but you've convinced a lot of us you are," he told the audience, later adding, "One problem that I've had today is keeping my Wongs straight." Reid subsequently apologized.

Republicans should ‘get a life’

Reid dismissed the GOP-led effort to defund ObamaCare in September 2013. "ObamaCare has been the law for four years. Why don’t they get a life and talk about something else? People deserve better," he said.

Cancer patient's complaint about ObamaCare ‘in the weeds’

Asked to respond to criticism of ObamaCare's coverage for cancer treatment made by one of his longtime foes, former doctor and then-Sen. Tom Coburn -- himself a cancer patient with ObamaCare -- Reid panned the Oklahoma Republican's remarks. "Dr. Coburn is very good at getting into the weeds and trying to find something that he thinks makes sense, but I think we need to look at the overall context of this bill," the Democrat told reporters.

And then there's this gem, as reported by the New York Times in January 2010: "When Bush invited Reid for coffee in the Oval Office in the final weeks of his presidency, the president’s dog walked in, and Reid says he insulted the president’s pet. 'Your dog is fat,' he said," the paper reported.