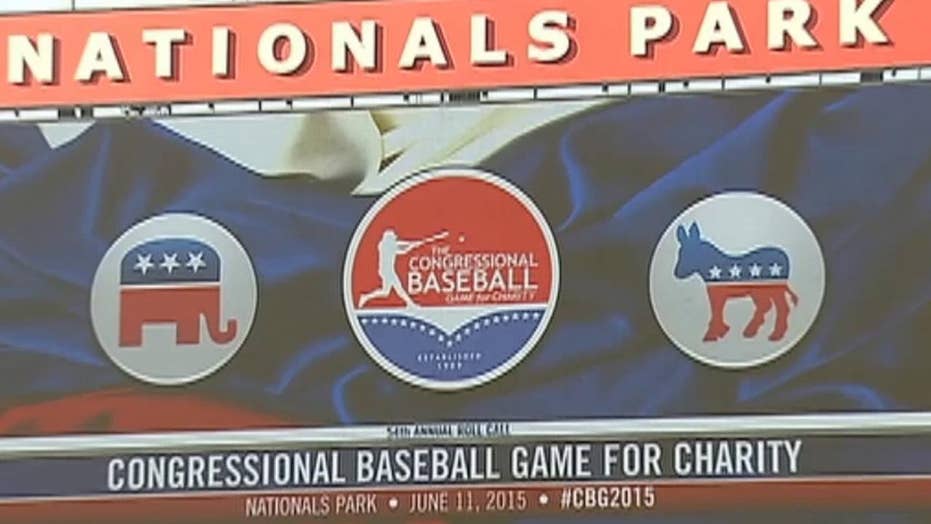 WASHINGTON, D.C. – Lawmakers turned to a time-honored baseball tradition Thursday night in a bid to bridge a growing partisan divide and in the wake of Wednesday's shooting of Majority Whip Steve Scalise -- but whether the show of solidarity makes it from the Nationals Park diamond to Capitol Hill remains to be seen.

Democrats called for stricter gun-control reform while Republicans batted back calls as an assault on their 2nd Amendment rights.

But outside the stadium in Washington, D.C., there was a strong bipartisan show of support as family, friends and fans rallied around the Capitol Hill ballplayers.

Lori Saunders and her family drove more than seven hours from Charlotte, N.C. to the nation's capital for the game.

"We wouldn't miss it," she told Fox News.

USCP Special Agent David Bailey, wounded in Wednesday's shooting, appeared on crutches to throw out the first pitch about 7:30pm before a crowd of nearly 25,000.

The Democrats won the game 11-2 and said they would put the trophy in Scalise's office, to cheers from the crowd.

Event organizers told Fox News that number is expected to reach more than $1 million this year. The money raised from Thursday’s game will go to four charities: The Boys and Girls Club of Greater Washington, The Capitol Police fund, The Washington Nationals Dream Foundation and The Washington Literacy Center.

Roll Call, a longtime sponsor of the annual bipartisan game, said tickets were selling at a rate of 500 per hour – and that by Thursday afternoon, more than 20,000 tickets had been sold.

Since 1909, the annual congressional baseball game has been a popular annual partisan showdown by members of Congress, their aides and lobbyists. Players usually sport the uniform of their home states and districts, although Thursday they donned Louisiana State University uniforms as a tribute to Scalise, who remains in critical condition after being shot in the hip.

Democrats wore white while Republicans were in black under their jerseys.

President Trump did not attend Thursday’s game, although he videotaped a message in which he told those assembled, "you are showing the world that we will not be intimidated by threats, acts of violence, or assaults on our democracy."

Lawmakers pushed House leaders on Wednesday to allow the game to go forward and said the competition between the teams will continue.

“We’re not going to let incidents like this change our way of life or our routines,” Democratic coach Rep. Mike Doyle at a news conference Wednesday.

“I did tell [Republican coach Rep. Joe Barton] that I love him before the game, I love him after the game, but during the game we’re going to play to win and I know Joe’s team is going to do the same thing and charities are going to benefit.”