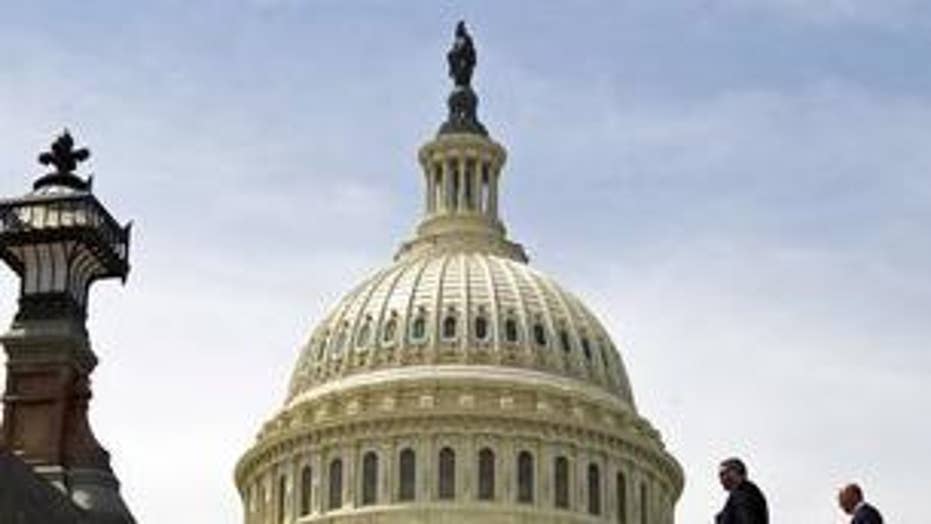 Lawmakers feeling the heat from districts that have a large number of federal employees.

The Senate adjourned Sunday without reaching an agreement to end the government shutdown as Senate Majority Leader Mitch McConnell called for both parties to "step back from the brink."

"The shutdown should stop today," McConnell, R-Ky., said on the Senate floor Sunday evening. "And we'll soon have a vote that will allow us to do that."

However, Senate Minority Leader Chuck Schumer said he and McConnell "have yet to reach an agreement on a path forward" to re-opening the government.

For most of the day, a bipartisan group of approximately 18 senators huddled to craft a compromise spending plan to present to their respective leadership teams. The group was expected to meet at 10 a.m. Monday, with a vote to break a Democratic filibuster on a short-term funding bill scheduled for noon.

The contours of the bipartisan proposal were still taking shape Sunday evening. In exchange for Democratic votes on a three-week spending measure, the GOP leadership in the Senate would agree to address immigration policy and other pressing legislative matters in the coming weeks.

Sen. Chris Coons, D-Del., said the potential deal would not secure an immediate vote on immigration tied to reopening the government, but lawmakers were seeking "an agreement that we would proceed to immigration."

The approach found advocates in Sen. Lindsey Graham, R-S.C., who has been trying to broker an immigration deal, and Sen. Rand Paul, R-Ky., both of whom rejected an earlier short-term proposal. Sen. Jeff Flake, R-Ariz., another previous "no" vote, announced he would vote in favor of reopening the government Monday.

Seeking to win over holdout votes, McConnell pledged Sunday that the Senate would take up legislation on some top Democratic priorities, including immigration, if they aren't already addressed by Feb. 8.

Republicans have appeared increasingly confident that Democrats were bearing the brunt of criticism for the shutdown and that they would ultimately buckle. The White House and GOP leaders said they would not negotiate with Democrats on immigration until the government is reopened. 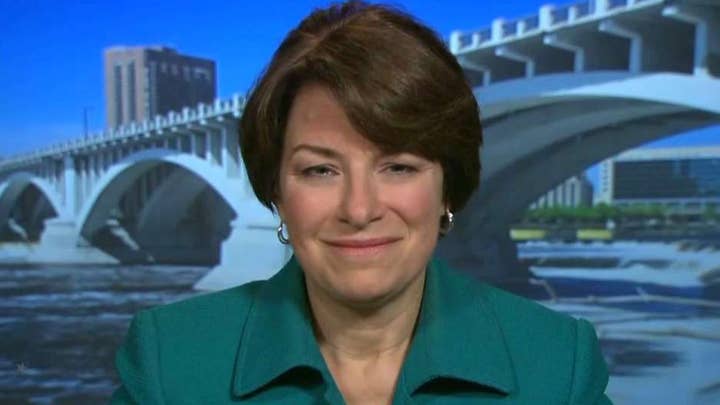 There were indications Sunday that Democratic resolve was beginning to waver, with growing worries that a prolonged shutdown could prove to be an electoral headache for the party just as they have grown confident about their prospects in November.

"I think they miscalculated on the shutdown," Senate Majority Whip John Cornyn, R-Texas, said. "It's very unpopular and they're trying to find a way out of it."

"The American people cannot begin to understand why the Senate Democratic leader thinks the entire government should be shut down until he gets his way on illegal immigration."

During a meeting with reporters, Graham, R-S.C., warned Democrats to not "overplay your hand."

"A government shutdown is not a good way to get an outcome legislatively," Graham added.

Discussions took place in behind closed doors throughout the day with few outward signs of progress, as lawmakers took turns delivering animated speeches to near empty chambers to explain why the other party is to blame. McConnell and Schumer met off the Senate floor in the early evening, as many in quiet Capitol offices flipped their television screens to playoff football games. 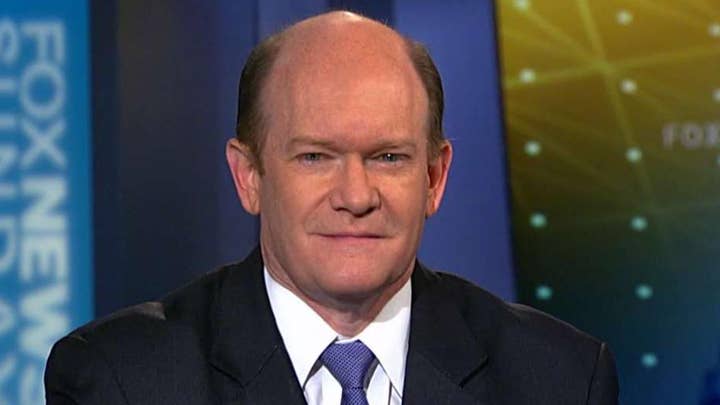 McConnell opened the chamber’s rare Sunday legislative session, on the second day of the shutdown, by saying Schumer on Friday “made the extraordinary and destructive choice to filibuster our bipartisan bill and guarantee the American people a shutdown of their federal government.”

He also accused Schumer of making the decision to “shut down the federal government for hundreds of millions of Americans because he didn’t get everything he wanted in one meeting” with President Trump.

The shutdown has centered on Democrats’ demand that any spending bill to keep the government fully operational include protections for illegal immigrants who came to the United States as children.

Schumer argued again Sunday that he offered a compromise immigration plan to Trump to avoid a shutdown, including billions for his must-have U.S.-Mexico border wall. However, he stopped short of repeating that “negotiating with President Trump is like negotiating with Jell-O.”

“On Friday in the Oval Office, I made what I thought was a very generous offer to the president, the most generous offer yet,” Schumer said Sunday on the Senate floor. “The president must take yes for an answer. Until he does, it’s the Trump Shutdown.”

Earlier Sunday, Trump suggested that Senate Republicans change chamber rules -- and resort to the “nuclear option” -- so that they could sidestep the 60 votes needed to stop the Democrats’ filibuster, then pass a long-term budget with a simple, 51-vote majority.

“Great to see how hard Republicans are fighting for our Military and Safety at the Border,” Trump tweeted. “The Dems just want illegal immigrants to pour into our nation unchecked. If stalemate continues, Republicans should go to 51% (Nuclear Option) and vote on real, long term budget, no C.R.’s!” referring to continuing spending resolutions.

However, McConnell has said he's opposed to changing the rules.

Later, on the Senate floor, McConnell sounded less unequivocal, suggesting he supported using a filibuster “from an institutional point of view but the question is, when do you use it?”

Coons was critical of Trump's tweet on “Fox News Sunday”, including its suggestion about the nuclear option, considering the 60-vote threshold has for decades provided the Senate’s minority party with some check on the majority party’s power.

“This is another example of President Trump throwing a tweet in the middle of bipartisan negotiations that are making progress,” Coons said. “I think Senator McConnell, the majority leader, in the end will have much more say about how the Senate is run than the president should.”

Many Americans already have felt the impact of the shutdown, with weekend closures at national parks. But the full impact will be more evident Monday, when nearly 1 million federal workers are set to be furloughed without pay. In addition, many needed-but-non-essential government services with be curtailed because the government has no money to provide them.

Democrats have said their concerns about the spending bill go beyond protecting young illegal immigrants from deportation to include providing disaster relief and boosting spending for opioid treatment and other domestic programs.

His remarks were typical of the finger-pointing and blaming involved in the shutdown.

The GOP-controlled House passed its version of the spending bill before sending it to the Senate, where it has stalled.

House Republican leaders also met Sunday but only for about 15 minutes.

“Too many people are hurt by this,” House Majority Leader Kevin McCarthy, R-Calif., said afterward. “We want to get this done.”

The president canceled plans to travel to his resort in Florida for the weekend, which was to include a high-dollar fundraiser. And he instead has worked the phones, staying in touch with McConnell, while White House legislative affairs director Marc Short and budget chief Mick Mulvaney meet at the Capitol with House Republicans.

Mulvaney told “Fox News Sunday” that Trump wouldn't try to “weaponize” the shutdown to his political advantage like the Obama administration did in 2013.

Social Security and most other safety-net programs will not be affected by the lapse in federal spending authority. Critical government functions continued, with uniformed service members, health inspectors and law enforcement officers set to work without pay. But if no deal is reached before Monday, an estimated 800,000 federal employees will be furloughed.

On immigration, Democrats are seeking a deal to protect so-called Dreamers. About 700,000 of them have been shielded against deportation by the Obama-era Deferred Action for Childhood Arrivals program, or DACA, which Trump will end in March. He's given lawmakers until then to pass legislation restoring the protections, but he's demanded added money for his proposed border wall with Mexico as a price.