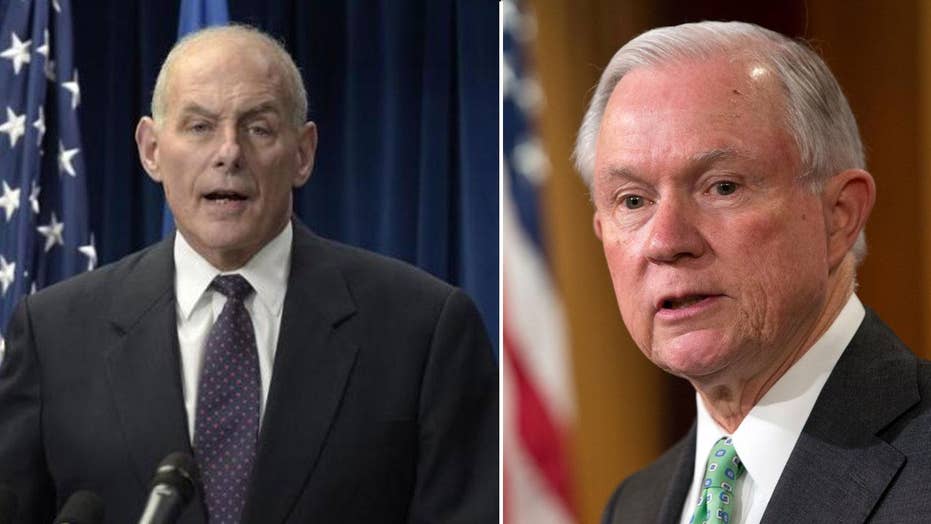 “When you are caught, you will be detained, adjudicated and deported,” Sessions said. “Do not come unlawfully. Wait your turn.”

Sessions and Kelly were making their first stop in a two-day border trip including El Paso and San Diego.

They toured the U.S.-Mexico border and got a first-hand look at border operations and also visited the immigration court in El Paso. Sessions described El Paso as the “front lines” and “ground zero” in the fight against illegal immigration, gangs and drug cartels.

Both men reaffirmed the Trump administration’s tough stance on illegal immigration and tried dissuading citizens of other countries from trying to come in illegally.

“For those who still seek to violate our laws and enter the country illegally, let me be very clear. Don’t come. Please don’t come,” said Sessions.

“We will continue to expand our approach of deterring illegal immigration. Everything’s on the table in that regard,” said Kelly. “That includes our approach of prosecuting anyone who pays traffickers to smuggle people into the country. Especially those who smuggle in children.”

The Attorney General announced the DOJ will hire 50 immigration judges this year and 75 next year to help overcome the massive backlogs of cases that can take years to be heard.

Kelly added that judges are being moved from the interior of the country to border cities to handle immigration-related cases as close to the border as possible.

“This means detained immigrants aren’t biding their time in the United States. They’re not using our government’s resources. It means we can move them through our system more efficiently, shorter waits and faster repatriation to their countries of origin,” said Kelly. “If that’s what the law allows.”

In addition to more judges, Sessions said he placed a border security coordinator in each U.S. Attorney’s office who will be personally responsible for overseeing the efforts to prosecute immigration cases and report back directly to the Attorney General.

He also said he’s told U.S. Attorney’s offices to make criminal immigration cases a priority and he’s provided specific guidance on how to adjudicate the cases.