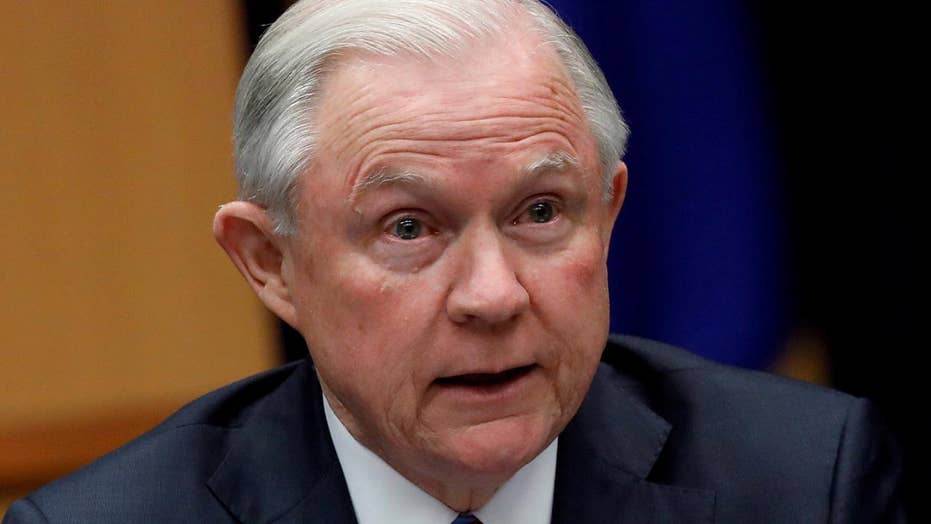 The Senate’s Russia probe will hit a new level of intensity Tuesday when Attorney General Jeff Sessions becomes the highest-ranking official to testify – in what Senate Intelligence Committee leaders confirmed will be an open hearing, in the spirit of last week’s dramatic session with James Comey.

The circumstances are different for Sessions’ appearance. While Comey was a witness scorned by President Trump and ready to dish on the leader who fired him, Sessions remains the top law enforcement official in the country, working for Trump's administration.

But lawmakers – particularly Democrats – are preparing tough questions for Sessions both about Russia’s contact with Trump campaign associates and the circumstances of Comey’s firing.

Senate Minority Leader Chuck Schumer, D-N.Y., who had called for Sessions’ testimony to be public, welcomed the open hearing as a “positive step” but said the attorney general should be “forthcoming” regarding “unanswered and troubling questions.”

He called for Sessions to clarify what involvement he had in the Russia probe before his recusal; what “safeguards” are now in place; and why he “felt it was appropriate” to recommend Comey’s firing when he was leading that investigation.

“Recommending Director Comey’s firing would seem to be a violation of his recusal, and Attorney General Sessions needs to answer for that,” Schumer said in a statement.

For the Trump team, Tuesday’s open hearing runs the risk of escalating the political drama surrounding the Russia probe and continuing to distract from the policy agenda the administration is trying to jump-start.

But Sessions apparently wanted to testify in public, to help clear the air.

“He believes it is important for the American people to hear the truth directly from him and looks forward to answering the committee's questions tomorrow,” a Justice Department spokesperson said.

Sessions had been set to testify before a budget-related subcommittee on Tuesday but, in letters to key lawmakers, said the intelligence committee that heard from Comey would be the more appropriate venue considering the Russia-related questions.

It was initially unclear whether the hearing would be open, but committee leaders announced Monday it would be public.

The hearing is now set to begin at 2:30 p.m. ET on Tuesday in open session.

“[Sessions] had already recused himself and then, suddenly, he's the one apparently recommending to the president that Comey be fired and the president has … declared it was all about the Russian investigation,” Reed said.

The Trump administration has given numerous reasons for Comey’s firing, including his handling of the Hillary Clinton email probe. But Comey testified last week that he thinks the Russia probe was the driving force.

Reed, further, said he has questions about Sessions’ past meetings with Russian officials beyond those he’s already declared.

“That will come up,” he vowed.

Sessions recused himself from the Russia probe after acknowledging he met twice last year with the Russian ambassador.

During his testimony last week, Comey suggested there might be more to Sessions' recusal from the Russia probe, telling lawmakers he believed it was “inevitable” that Sessions would recuse himself and there were “facts” he could not discuss in an open hearing.

The Department of Justice, however, issued a statement standing by the original explanation that Sessions recused himself due to his participation in Trump’s campaign.

“[I]t was for that reason, and that reason alone,” spokesman Ian Prior said.

Republicans have moved to downplay the Russia controversy in the wake of Comey’s testimony, claiming the fired FBI director affirmed some of Trump’s key claims. On “Fox News Sunday,” Republican National Committee Chairwoman Ronna McDaniel appealed to lawmakers to drop their line of investigation regarding the question of collusion between the Trump campaign and Moscow.

“This is a fishing expedition,” she said. “I’m calling for an end to the investigations about … President Trump’s campaign colluding with the Russians. There’s been no evidence of it.”