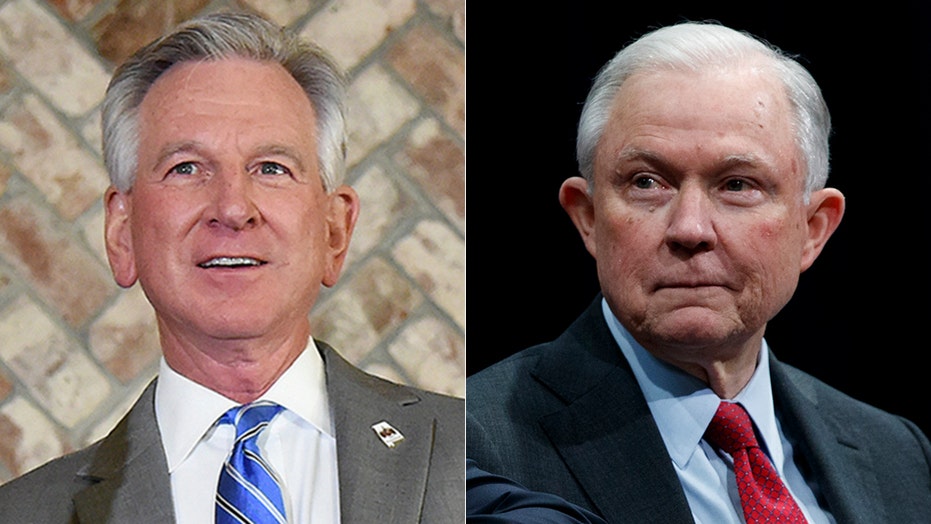 Jeff Sessions, the former Alabama senator who is now running to reclaim his seat after a brief stint as President Trump's attorney general, released an open letter to Alabamians on Tuesday explaining his recusal from the Department of Justice probe into Russian election interference amid attacks from Trump and his GOP primary opponent on the issue.

The letter seeks to set the record straight on why Sessions stepped back from the investigation -- which also looked into potential Trump campaign involvement in the Russian scheme -- while reaffirming Sessions' support for the president. It comes just days after Trump slammed Sessions on his recusal in an appearance on "Fox & Friends," attacks which have been amplified by Sessions' Trump-endorsed GOP primary opponent Tommy Tuberville.

"As the world knows, the President disagreed with me on recusal, but I did what the law required me to do," Sessions' letter says. "I was a central figure in the campaign and was also a subject of and witness in the investigation and could obviously not legally be involved in investigating myself. If I had ignored and broken the law, the Democrats would have used that to severely damage the President."

Sessions, in the letter, also reminds voters that he was the first sitting senator to endorse Trump in February of 2016, well before it was clear that he would escape the crowded GOP primary.

"I was the first to endorse President Trump, even when many thought I was nuts to do so," Sessions says. "I helped Trump win and traveled the country with him, embedded in his campaign. I am one of the architects of his agenda, and I was pushing his agenda even before he ran for office."

He continues: "I have remained faithful to the President and his agenda. I have always stood up for him, and I never backed down, not even for one moment. My convictions are immovable, built on rock, not sand."

But the president quickly soured on Sessions as his attorney general after he stepped back from the Russia investigation. Sessions remained the attorney general for more than a year after his recusal before he eventually resigned in Nov. 2018. But the president still harbors hard feelings toward the longtime former Alabama senator and has made clear he felt betrayed by Sessions' move to recuse.

SESSIONS TELLS TUCKER HE WANTED TO FIRE COMEY AS FBI DIRECTOR: 'I FELT THAT HE SHOULD NOT CONTINUE'

Trump continued: "He goes in, he was so bad in his nomination proceedings I should have gotten rid of him there. But every time the word Russia, he knew less about Russia than I did, he knew nothing about Russia... Jeff was just very weak and very sad and when the name Russia was mentioned, just the word Russia, he immediately instead of being a man and saying 'this is a hoax,' he recused himself."

Tuberville, a former coach of the Auburn Tigers football team, used the president's attacks for his own campaign messaging.

"President Trump just EXPOSED Jeff Sessions for what he is: someone who tucked his tail and ran," Tuberville tweeted, sharing the "Fox & Friends" clip.

Alabama U.S. Senate candidate Tommy Tuberville, right, watches election returns and works on his speech in the main house at Auburn Oaks Farm, the site of his election party, Tuesday, March 3, 2020. Tuberville is in a tight race with seven competitors for the Senate seat. (Joe Songer/The Birmingham News via AP)

Sessions responded to the attack from Trump by issuing a statement noting that had he not recused himself he "would have been breaking the law."

"I did the right thing for the country and for President Trump," Sessions said.

Tuberville, in turn, responded with a tweet attacking Sessions for the apparent insubordination to the president.

"@jeffsessions has gone too far this time!" Tuberville tweeted. "He has called President Trump a liar in his latest statement. It’s time we fire him once and for all! Help me send him a message today that we do not want a weak-kneed swamp rat representing Alabama."

That controversy is likely what prompted Sessions' Tuesday letter, which in the process of defending Sessions' decision on recusal also turned fire on Tuberville. Sessions said his commitment to both following the law and supporting Trump is steadfast. He added that his "principles, like my faith, are immovable and non-negotiable."

"My opponent, Tommy Tuberville, calls that weakness, which reveals his true lack of integrity," Sessions said, before hitting Tuberville, who is extremely popular in college football-loving Alabama, as a carpetbagger and flip-flopper.

"Mr. Tuberville is an opportunist who isn’t from here," Sessions says. "He stopped here for work for a while, and moved on, eventually retiring in Florida. He doesn’t know the first thing about Alabama. He says the President is wrong on China, says we must import foreign workers to take American jobs, and up until a few months ago, he said he favors amnesty for illegal immigrants. If you don’t like his position on an issue, just wait a few weeks and he will change it. His house is built on sand."

Sessions and Tuberville are set to face-off in a July 14 primary runoff election that will decide who gets the opportunity to take on sitting Sen. Doug Jones, D-Ala., who found his way into the deep red state's senate seat by winning a 2017 special election against disgraced former judge Roy Moore.