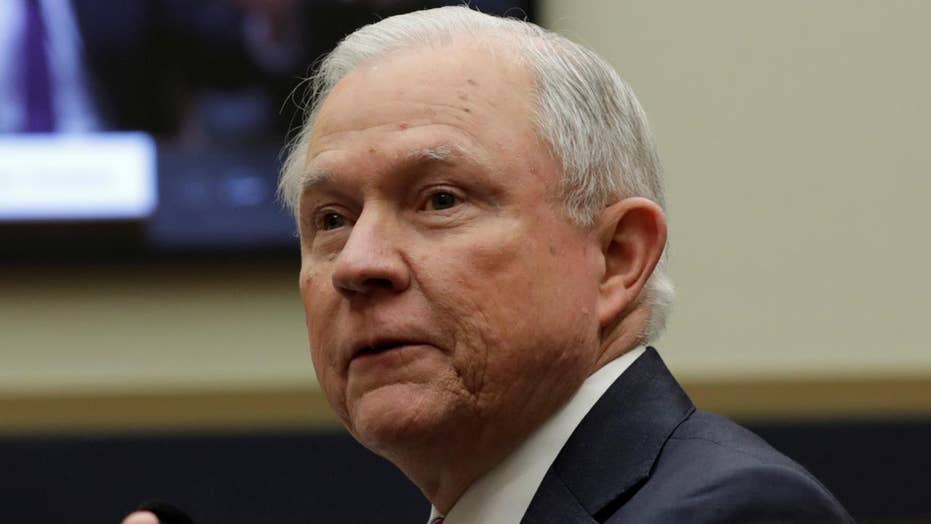 The attorney general testifies on the department's handling of classified leaks from before and after President Trump took office.

The Justice Department has a whopping 27 open investigations into leaks of classified information with a “political motive,” Attorney General Jeff Sessions revealed Tuesday — that’s three times more than the agency has had in the three years prior.

The nation's top law enforcement officer gave new details on the active probes during his highly anticipated testimony before the House Judiciary Committee.

“Leaks have reached epidemic proportions,” Sessions said. “We have 27 ongoing investigations, some of those involve leaks before President Trump took office, and some after.”

Sessions added: “But before that, it was only three per year — there were nine. There are three times as many this year as in the entire three years before being investigated.”

Rep. Ron DeSantis, R-Fla., pressed Sessions over whether anyone had been held accountable “criminally or administratively” for leaking information against the Trump administration “with a political motive.”

Sessions responded that “the individual in Georgia” had been charged.

SESSIONS: I HAVE 'ALWAYS TOLD THE TRUTH' IN TESTIMONY; SAYS HE DOES NOT RECALL CONVERSATION WITH CARTER PAGE

“It cannot be allowed to continue and we will do our best effort to ensure it does not continue,” Sessions said.

The stepped-up investigations come amid pressure from the White House. President Trump criticized Sessions in July for being “weak” on such issues.

Following the president’s comments, Sessions held a press conference with Director of National Intelligence Dan Coats calling for an end to the leaks.

WHO IS REALITY WINNER? ACCUSED LEAKER WANTED TO 'RESIST' TRUMP

“For those out there who may be listening or watching these announcements, understand this: if you improperly disclose classified information, we will find you,” Coats said at the time.

In July, the Senate Homeland Security and Governmental Affairs Committee released a report that revealed the Trump administration was facing an “alarming” and “unprecedented” cascade of media leaks that posed a potential danger to national security. The Republican-authored report estimated that the administration has dealt with roughly one leak per day.

The report stated that leaks flowed about “seven times faster” under the Trump administration than during the first 126 days of both Obama’s and George W. Bush’s presidency.