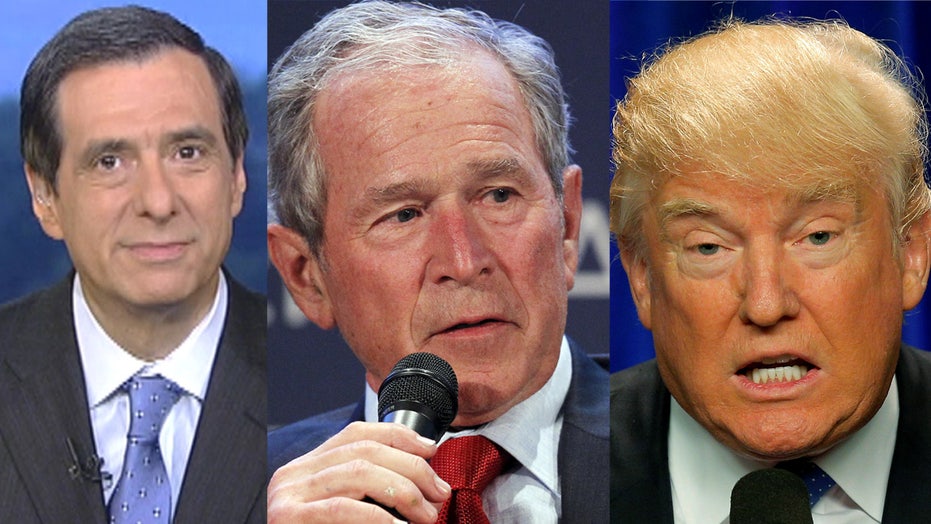 'MediaBuzz' host reacts to the NY Times story that George W. Bush is coming to rescue the Republican party from Donald Trump

George W. Bush just pulled off something rather remarkable.

He got himself on the front page of the New York Times as helping to save the Republican Party from Donald Trump without uttering a word.

The story has political impact because the former president has largely stayed out of the political wars since leaving the White House, except for a few appearances for his brother Jeb.

But in keeping with Bush’s above-the-fray stance, there are no quotes from him criticizing Trump. The piece is about him headlining fundraisers for potentially vulnerable Republican senators, such as Kelly Ayotte and his old foe John McCain—who are described as being in jeopardy because of the man at the top of the ticket.

The only view indirectly attributed to Bush 43 is this: “Friends say that the former president is deeply bothered by Mr. Trump’s campaign message, especially his derogatory remarks about Muslims and immigrants.”

At the McCain event, Bush “stressed the importance of preserving the Republican-held Senate as a ‘check and balance’ on the White House, suggesting that such a check was needed, whether the next president is Mr. Trump or Hillary Clinton.”

Bush’s spokesman is quoted only as saying that his boss wants to help senators who share “timeless conservative values.”

All very surgical. No one can accuse Bush—who we already knew wasn’t a Trump fan because he’s skipping the convention, along with his father and brother—of knifing the Republican who wants his old job.

But while the story implicitly casts Bush as a savior, it only briefly deals with another way of looking at the hostility.

Trump ran against Bush and won the GOP nomination. I don’t just mean Jeb, whose $100-million campaign was deemed the early favorite to banish the billionaire and seize the prize. I mean George W. Bush, and what might be called Bushism.

And while doing this, Trump got more than 13 million Republican votes. Not only did these voters reject Jeb, they rejected John Kasich, Marco Rubio and others who might be said to be more in the Bush mold. And Trump’s bombastic style was a repudiation of the Bush brand of politics, which won the party the White House in 2000 and 2004.

In that vein, Bush’s estrangement is understandable. This is no longer his party, or the party of the gentlemanly 41st president. And that would have been true if Ted Cruz, who finished second, had won the nomination. The political pendulum has swung away from the Bush clan. In fact, Bush’s deputy secretary of State, Richard Armitage, just announced he’s voting for Hillary.

You have to admire the way Bush has resisted the temptation to criticize his successor for almost eight years, sticking to his vow to retreat from public life. Now the only way for this tough-talking Texan to skewer his potential successor is through coded messages.