President Trump expresses optimism about getting a DACA deal done as Republican senators roll out their immigration plan; Mike Emanuel reports on what it will take to get Democrats' support.

With a spending deal now completed, Congress begins efforts this week to pass bipartisan immigration reform -- starting on Monday with a rare, open-ended Senate debate set to focus largely on the future of tens of thousands of illegal immigrants known as "Dreamers."

Senate Majority Leader Mitch McConnell recently vowed that as long as the federal government stays solvent and open that he would allow such debate and see that proposals get a floor vote -- with the Dreamers’ temporary deportation protections expiring March 5.

“I do think that we can get something done this week,” he told NBC News’ “Meet the Press.” “We're going to have something in the Senate that we haven't had in a while. It's a real debate on an issue.” 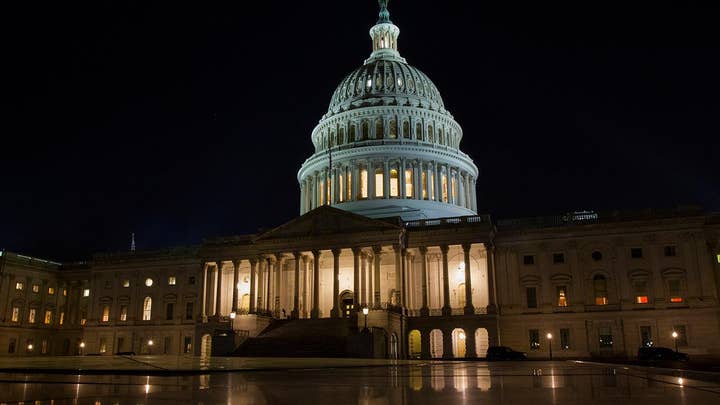 Despite such optimism, Flake allowed that Congress must at least do something to protect the Dreamers before their protections under the Obama-era Deferred Action for Childhood Arrivals, or DACA, program expires next month.

“But, if there is a problem in the end, and we can't reach that, I think that these Dreamers need to be protected,” said Flake, who already has talked about an alternative or scaled-back immigration-reform plan limited to border security funding and a three-year extension on DACA, which protects the roughly 700,000 Dreamers, brought into the U.S. illegally as children.

Speaker Paul Ryan, R-Wis., also has vowed to hold a robust, bipartisan debate on the issue but has suggested he’d allow votes only on proposals that Trump would sign into law.

House Minority Leader Nancy Pelosi last week pushed the issue – particularly protection for Dreamers – with an eight-hour floor speech that essentially called for Ryan to make the same deal with chamber Democrats that McConnell made with Senate Democrats.

“Bring everything to the floor,” the California Democrat said the next day.

Ryan also appeared to be headed for a showdown over immigration with the House Freedom Caucus, a conservative group pushing a hardline reform plan.

The bill by Virginia Republican Bob Goodlatte, chairman of the House Judiciary Committee, offers a legislative fix to DACA, border security funding, changes to so-called “chain migration” that allows people to bring extended family into the country, and changing a federal immigration program from lottery-based to merit-based.

“The Freedom Caucus is going to be in the middle of that,” group member and Ohio GOP Rep. Jim Jordan told “Fox News Sunday.”

GOP congressional leaders have suggested the bill would have little chance of passing in the Senate, where Republicans would need support from at least nine chamber Democrats to get the minimum 60 votes for passage.

Tucker's Thoughts: We've created U.S.-hating Linda Sarsours. Diverse countries need a reason to stick together. Our elites ought to figure out what that reason is. #Tucker

Still, the most influential voice in the debate may be on the other side of Pennsylvania Avenue.

If the aim is to pass a legislative solution soon, Trump remains a crucial and, at times, complicating player.

Democrats and Republicans have said they cannot read Trump’s position on key points, which apparently has led some to urge the White House to minimize his role in the debate.

Yet Trump’s ultimate support will be vital if Congress is to overcome election-year pressures against compromise. No deal crafted in the Senate is likely to see the light of day in the more conservative House without the president's blessing and promise to sell compromise to his base.

Trump has said publicly that he wants to help the Dreamers. He’s even proposed a path to citizenship for as many as 1.8 million illegal immigrants, though in exchange for $25 billion for his proposed U.S.-Mexico border wall and significant curbs to legal immigration.

For Democrats, perhaps its most radioactive proposal would bar legal immigrants from sponsoring their parents or siblings to live in the U.S.

McConnell, R-Ky., has scheduled an initial procedural vote for Monday evening to start debate. It is expected to succeed easily, and then the Senate will spend days or weeks sorting through proposals.

Sunday evening, a group of seven Republican senators led by Judiciary Committee chairman Chuck Grassley, R-Iowa, announced they would propose legislation mirroring the framework put out by the White House. That framework includes an end to both the diversity visa lottery and an end to chain migration.

Votes are also possible on a compromise by a small bipartisan group led by Sens. Dick Durbin, D-Ill., and Lindsey Graham, R-S.C. It would provide possible citizenship for hundreds of thousands of Dreamers, $2.7 billion for border security and some changes in legal immigration rules.

And, Sens. John McCain, R-Ariz., and Chris Coons, D-Del., would offer legal status but not necessarily citizenship, and require tougher border security without promising wall money. But Trump has rejected both proposals.

Underscoring how hard it's been for lawmakers to find an immigration compromise, some two dozen moderates from both parties have met for weeks to seek common ground. So have the No. 2 Democratic and GOP House and Senate leaders. Neither group has come forward with a deal.

In January, Trump invited two dozen lawmakers from both parties to the White House in what became a nearly hour-long immigration negotiating session. He asked them to craft a "bill of love" and said he'd sign a solution they'd send him.

At another White House session days later, he told Durbin and Graham he was rejecting their bipartisan offer. He used a profanity to describe African nations and said he'd prefer immigrants from Norway, comments that have soured many Democrats about Trump's intentions.

Trump made a clamp-down on immigration a staple of his 2016 presidential campaign. As president he has shown mixed expressions of sympathy for Dreamers with rhetoric linking immigration to crime and drugs.

Last September he said he was ending DACA, arguing former President Barack Obama had lacked the legal power to create DACA. Trump gave Congress until March 5 to somehow replace it, though a federal court has forced him to continue its protections.

The court's blunting of the deadline has made congressional action even less likely. Lawmakers rarely take difficult votes without a forcing mechanism -- particularly in an election year. That has raised the prospect that the Senate debate launching Monday would serve largely to frame a bigger fight over the issue on the campaign trail.

Trump seemed to acknowledge that in a tweet Saturday: "Republicans want to fix DACA far more than the Democrats do. The Dems had all three branches of government back in 2008-2011, and they decided not to do anything about DACA. They only want to use it as a campaign issue. Vote Republican!"