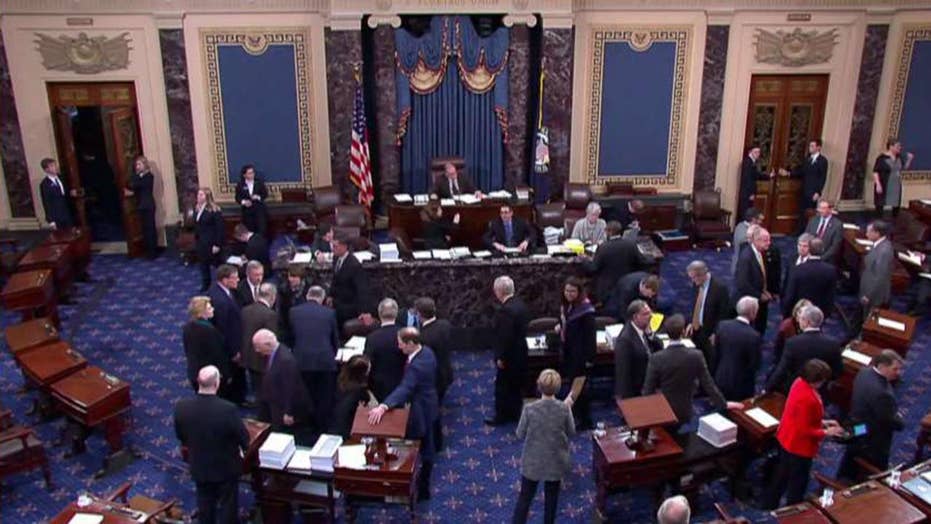 Senators first rejected a Republican plan that would reopen government through September and give President Trump $5.7 billion for border funding before voting down a Democratic alternative that would fund government agencies through February 8 with no wall money; Chad Pergram reports from Capitol Hill.

The Senate on Thursday rejected both the Democratic and GOP proposals to end the ongoing partial federal government shutdown, with both measures falling far short of the 60-vote threshold needed to pass.

Although each of the dueling measures was expected to fail even before Thursday, it was hoped twin defeats might spur the two sides into a more serious effort to strike a compromise. Almost every proposal needs 60 votes to advance in the Senate, which is under 53-47 Republican control.

The final vote on the GOP bill was 50-47. West Virginia Democrat Joe Manchin was the lone Democrat to cross over and support the GOP package, which would have provided $5.7 billion for President Trump's proposed border wall while also offering several immigration-related concessions and tightening asylum rules. GOP Sens. Tom Cotton and Mike Lee voted against the Republican measure.

"If this had been a vote to begin debate on a deal to end the shutdown, I would have happily voted yes," Lee told Fox News. "But this was a vote to end debate on a bill that I believe is fundamentally flawed. In fact, after specifically asking for assurances that we would be allowed to offer amendments, no assurances were given. This bill as is simply does not do enough to reform our immigration system or address the crisis at our southern border.”

Added Cotton: "I could not support the bill because it gives legal status to illegal aliens without first securing our borders, implementing e-verify, and ending chain migration—all of which would eliminate the incentives for more illegal immigration. I will continue to work with the president and my colleagues to reopen the government and secure the border.”

The Democrats' plan would have reopened agency doors through Feb. 8 while bargainers seek a budget accord, but included no wall funding. The vote was 52-44 on the Democratic bill, with all Democrats voting yes and several Republicans crossing over, including Utah Sen. Mitt Romney, Maine Sen. Susan Collins, Alaska Sen. Lisa Murkowski, Colorado Sen. Cory Gardner, Georgia Sen. Johnny Isakson, and Tennessee Sen. Lamar Alexander. Not voting on the bill were Sens. Richard Burr, Rand Paul, James Risch, and Jacky Rosen.

Both the GOP and Democratic measures would have reopened federal agencies and pay 800,000 federal workers who are about to miss yet another paycheck amid the shutdown, now in its 34th day.

In the wake of the failed votes, a bipartisan colloquy was underway on the Senate floor between senators trying to forge a bipartisan solution to reopen the government.

Border Patrol agents in Yuma, Arizona apprehend a group of over 100 Central Americans who illegally scaled the border wall.

Several House Democratic representatives, including Reps. John Lewis, Bobby Scott, Gregory Meeks, and Jamie Raskin, were gathered in the back of the Senate chamber during the vote, apparently to protest the Senate's failure to consider several bills to end the shutdown that passed the Democratic-controlled House.

Alaska Republican Sen. Lisa Murkowski, a moderate, told Fox News before the votes that she would support both of the proposals, and that Congress has an obligation to work on further negotiations through the weekend.

"I personally think both of them are flawed, but having said that, I'm going to vote for both of them," Murkowski said. "We're going to have two show votes, and my hope is that after that, it will allow us to really get down to work."

Murkowski continued: "So to my colleagues on the other side of the aisle, if you don't like the provisions that have been laid down, then let's let's work them through. Let's get to yes here. I don't like the asylum provision, quite honestly, that the president laid out there. So let's talk about it. Let's talk about this. But if we do these two votes this afternoon and then everybody skedaddles for the weekend --Wow. What kind of a message is that?"

Senate Minority Leader Chuck Schumer of New York said the Democratic plan was a "down the middle (to) reopen government and has received overwhelming support from both sides before President Trump said he wouldn't do it."

Senate Majority Leader Mitch McConnell, R-Ky., countered that the GOP proposal was "a compromise package the president will actually sign," calling Schumer's alternative a "dead-end proposal that stands no chance."

"It's hard to imagine 60 votes developing for either one," said Sen. Roy Blunt, R-Mo. GOP moderates such as Murkowski and Susan Collins of Maine are expected to vote for the Democratic plan, as is Cory Gardner of Colorado, one of the few Republicans representing a state carried by Hillary Clinton in 2016.

The White House was eagerly watching Thursday's votes. Officials think it will be harder for Democrats to keep sticking together amid Trump's offers, according to a person familiar with White House thinking who was not authorized to speak publicly. They are hopeful for defections by Democrats who may cross party lines to vote with the president.

Speaker of the House Nancy Pelosi, D-Calif., talks to reporters a day after officially postponing President Donald Trump's State of the Union address until the government is fully reopened, at the Capitol in Washington, Thursday, Jan. 24, 2019. (AP Photo/J. Scott Applewhite)

The House earlier on Thursday passed the latest in a series of measures aimed at reopening the government with a 231-180 vote to open the Homeland Security Department. It was the 11th attempt to pass a bill ending the shutdown.

With the impacts of the shutdown becoming increasingly painful, however, lawmakers on both sides were trumpeting their willingness to compromise in the battle over border security and immigration issues, such as protection against deportation for immigrants brought to the country illegally as children.

"It's clear what the president wants," said House Majority Leader Steny Hoyer, D-Md. "It's clear what we want. If you have a negotiation, both parties are going to put on the table what they want." He added: "By definition a successful negotiation gets to a place where both sides feel they got something, right?"

"We can work this out," said House Appropriations Committee Chairwoman Nita Lowey, D-N.Y.

Trump's ex-chief of staff, John Kelly, joined the four other former Homeland Security secretaries in signing a letter urging Trump and his Democratic rivals to end the shutdown.

President Donald Trump, center, speaks in the Cabinet Room of the White House in Washington, Wednesday, Jan. 23, 2019, as he hosts a roundtable with conservative leaders to discuss the security and humanitarian crisis at the southern border. (AP Photo/Susan Walsh)

At a panel discussion held by House Democrats on the effects of the shutdown, union leaders and former Homeland Security officials said they worried about the long-term effects. "I fear we are rolling the dice," said Tim Manning, a former Federal Emergency Management Agency official. "We will be lucky to get everybody back on the job without a crisis to respond to."

The partial shutdown began just before Christmas after Trump indicated that he wouldn't sign a stopgap spending bill backed by top Republicans like McConnell, who shepherded a bill through the Senate that would have funded the government up to Feb. 8. The House passed a plan with money for the wall as one of the last gasps of the eight-year GOP majority.

On Thursday, almost five weeks later, House Democrats continued work on a package that would ignore Trump's demand for $5.7 billion for a wall with Mexico and would instead pay for other ideas aimed at protecting the border.

Many Democrats who oppose the wall supported a border barrier in the past, what changed?

How do past border proposals stack up to President Trump's? GOP strategist Lauren Claffey explains.

Details of Democrats' border security plan and its cost remained a work in progress. Party leaders said it would include money for scanning devices and other technological tools for improving security at ports of entry and along the border, plus money for more border agents and immigration judges.

A poll by The Associated Press-NORC Center for Public Affairs Research was the latest indicator that the shutdown is hurting Trump with the general public. While his approval among Republicans remains strong, just 34 percent of Americans like his performance as president and 6 in 10 assign a great deal of responsibility to him for the shutdown, about double the share blaming Democrats, according to the poll out Wednesday.