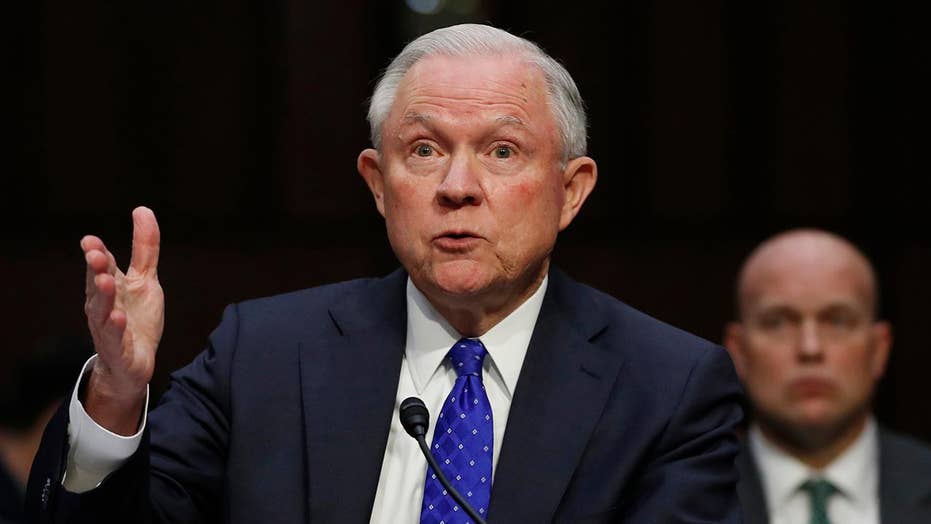 Sessions refuses to discuss his conversations with Trump

Both Senate Republicans and Democrats pressed the attorney general on the Comey firing and the investigation into Russian interference in the election; Catherine Herridge goes in-depth for 'Special Report.'

Senate Democrats want Attorney General Jeff Sessions to testify before Congress about why he failed to disclose a March 2016 meeting with then-candidate Donald Trump and members of his campaign team in which an adviser allegedly offered to set up a meeting between the president and Vladimir Putin.

Sessions' attendance at the meeting was revealed in court documents released Monday by special prosecutor Robert Mueller. The documents seem to show George Papadopoulos was the adviser who offered to set up the meeting. Papadopoulos pleaded guilty this week to lying to federal investigators.

Sessions has been quiet on his involvement at the session, despite being asked about it multiple times during several appearances on Capitol Hill.

A source familiar with the meeting told Fox News that it “seems clear that the people who remember the conversation believed that Papadopoulos was proposing a prospective idea of using his ‘Russian contacts’ to try to set up a meeting between Trump and Putin, which was immediately rejected by then-Senator Sessions.”

The source added, “At the time, of course, Papadopoulos was some 29-year old that nobody had ever heard of and who struck people in the room as someone who didn’t have a lot of credibility. As far as Sessions seemed to be concerned, when he shut down this idea of Papadopoulos engaging with Russia, that was the end of it and he moved the meeting along to other issues."

The same documents that disclosed the meeting show Papadopoulos has pleaded guilty to lying to the FBI about his contact with Russians during the 2016 campaign.

Sessions has been dogged over his testimony before Congress about interactions with Russians during the 2016 presidential campaign.

Under pressure, Sessions later recused himself from the Department of Justice investigation into Russian interference in the 2016 election.

Last month he reiterated he did not know of any Trump campaign official having contact with Russian officials – a claim Senate Democrats are pushing back on.

“He needs to clarify his testimony before our committee,” Judiciary Committee member Sen. Richard Blumenthal, D-Conn., told The Chicago Tribune. “There were questions that elicited exactly the kind of information that the Papadopoulos plea agreement made.”