Tim Scott: We need to ensure national security is synonymous with energy independence

Sen. Tim Scott of South Carolina is one of the leading Republicans in Congress who’s pushing to make parental involvement in education a GOP priority.

And Scott, the only Black Republican in the Senate and a rising star in his party, is taking his message to Ronald Reagan Presidential Library on Tuesday night, where he’ll spotlight his efforts as he delivers a wide-ranging address on his vision for the future of the conservative movement.

"One of the small silver linings of the pandemic is that more parents are more engaged in education than ever before. Parents have a right to know what their kids are being taught in the classroom," the senator will emphasize as he becomes the latest GOP leader and potential 2024 presidential contender to take part in a speaking series titled "Time for Choosing."

Following two years of educational turmoil fueled by curriculum fights and school closures driven by the coronavirus, the worst pandemic to strike the globe in a century, the education issue has emerged as one of the leading battlefields in electoral politics. GOP support for parents’ rights helped the party in last November’s elections win Virginia’s governorship and other statewide offices for the first time in a dozen years. And Republicans see education as a major issue in November’s midterm elections.

Scott, who’s been a leading advocate for parents’ rights, will say, according to excepts shared with Fox News ahead of his address, that "if a mom can’t read a book at a school board meeting because it’s too vulgar, why in the world would we allow our kids to read it in the classroom? To fix that we should demand that parents have access to their child’s curriculum."

With inflation soaring to its highest levels in four decades, Scott will also take aim at the Democrats and blame their massive government spending programs for the dramatic rise in consumer prices.

SAYING IT'S TIME TO ‘GO BACK TO THE FUTURE,’ TIM SCOTT LAUNCHES 2022 SENATE REELECTION BID

"Since the 2020 election, Democrats have pumped trillions of dollars into our economy – creating inflation, an invisible tax that’s hitting our most vulnerable populations the hardest: single moms, seniors on fixed incomes, and people living paycheck to paycheck," the senator will say. "Democrats’ leadership has led to a 40-year high in inflation, and they’re still pouring more money on this crisis. That’s not good for moms making decisions in homes like the one I grew up in." 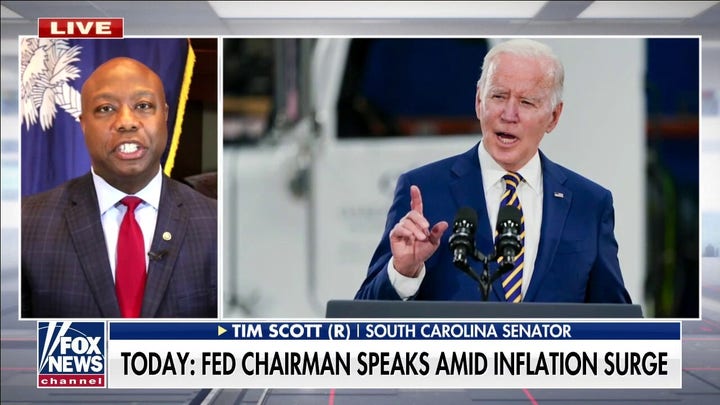 Scott will also take aim multiple times at President Biden, arguing that when it comes to foreign policy, "Biden’s weakness on the global stage has emboldened terrorists, bullies and dictators."

And spotlighting the ongoing crisis at the nation’s southern border, the senator will charge, "We’ve also seen the effects of weak border policies when it comes to drug trafficking. Traffickers are bringing fentanyl across our border with deadly consequences…. The Biden administration’s policies encourage vulnerable people to travel to our border, which only exacerbates the growing humanitarian crisis."

TIM SCOTT IS A FUNDRAISING GIANT

Scott was a South Carolina state lawmaker when he was elected to the U.S. House in 2010. Three years later he was appointed by then-Gov. Nikki Haley to fill a vacant Senate seat, becoming the first Black Republican in the chamber in over 30 years. He won a special election in 2014, earned a full six-year term in 2016, and he’s running again this year for what he’s said will be his last re-election campaign.

Sen. Tim Scott of South Carolina, the only Black Republican in the Senate and a rising star in the GOP, on June 28, 2021, launched his 2022 re-election campaign.  (Tim Scott Senate reelection campaign)

The senator will use his speech to share his belief that "conservatism is a set of deeply held beliefs that when properly communicated, when faithfully implemented, when actually lived can change your life and the life of a country."

TIM SCOTT'S NEW HAMPSHIRE TRIP WAS ALL ABOUT 2022, BUT IT SPARKED MORE 2024 SPECULATION

"I believe in conservatism because it changed my life," he’ll note. "It was education, hard work and faith that allowed my family to go from cotton to Congress in one lifetime…. Conservatism is my personal proof there is no ceiling in life. I can go as high as my character, my education and my perseverance will take me."

Scott's trips over the past year to Iowa and New Hampshire – the first two states to vote in the presidential nominating calendar – have sparked speculation about his possible national ambitions.

And so will his address at the Reagan Library.