The aide, Samantha Deforest Davis, was a staff assistant in Hassan’s office from August 2017 until last December. She was fired after Capitol Police discovered her possible involvement in the so-called "doxing" effort.

Court documents accuse Davis of aiding 27-year-old Jackson A. Cosko, a former Hassan aide who has pleaded guilty to five federal offenses, including two counts of making public restricted personal information, and one count each of computer fraud, witness tampering and obstruction of justice.

Prosecutors alleged Wednesday that Davis was persuaded by Cosko to "wipe down" Senate computers he had hacked. Davis now faces two misdemeanor charges: one federal count of aiding and abetting computer fraud and a District count of attempted evidence tampering, the Washington Post reported.

Also on Wednesday, Cosko was sentenced to four years in prison in the scheme, and was required to turn over the cell phones, computers, and other equipment he used.

Cosko's attorney, Brian W. Stolarz, responded: "No one should be judged by their worst act but how they emerge from it. Mr. Cosko is sincerely remorseful for his conduct, is in recovery, and looks forward to living a purposeful life after he serves his sentence."

Among the officials Cosko targeted were five Republican senators, including Senate Majority Leader Mitch McConnell of Kentucky. Cosko posted the home addresses and phone numbers of GOP Sens. Lindsey Graham of South Carolina, Mike Lee of Utah and Rand Paul of Kentucky -- as well as then-Sen. Orrin Hatch of Utah -- on Wikipedia. 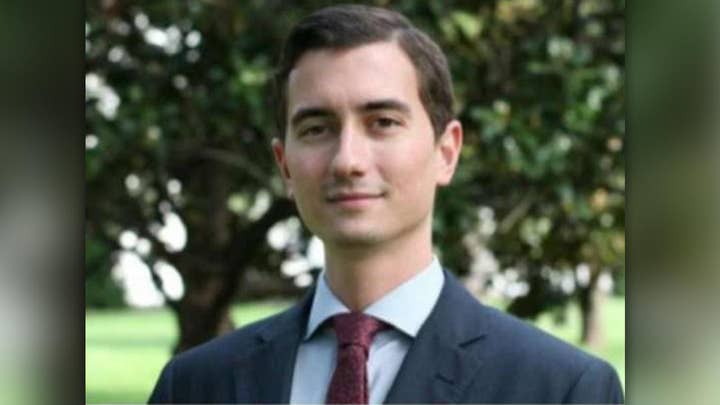 Davis is reportedly expected to plead guilty to two misdemeanor charges, including evidence tampering and aiding and abetting computer fraud.

Cosko, prosecutors said, became angry about the senators' support for Kavanaugh despite sexual assault allegations leveled against him. Cosko intended to intimidate the senators and their families, according to court records.

At the time of his arrest, Cosko was working as an unpaid intern for Rep. Sheila Jackson Lee, D-Texas, who fired him soon after. He was previously employed as a computer systems administrator in Hassan's office -- a job that gave him "intimate knowledge of, and broad access to" the computer systems in Hasan's office, according to court records. But he had been fired from Hassan’s office in May 2018 for failing to follow office procedures.

After the firing from Hassan's office, Cosko became angry and repeatedly burglarized the office without being detected, court records said. He copied gigabytes-worth of data, including dozens of user names and passwords belonging to Senate employees and "contact information for numerous sitting U.S. senators," according to court records.

Cosko was arrested Oct. 3, 2018, one day after a staffer discovered him working on a computer in Hassan's office, where Cosko was not authorized to be. Records show Cosko sent a threatening email to the staffer the evening he was confronted.

“I own EVERYTHING," Cosko wrote, adding, "If you tell anyone I will leak it all."

Left-wing activists separately targeted numerous other top Republicans amid the Kavanaugh fight. In the wake of his vote to confirm Kavanaugh, for example, Republican Sen. Cory Gardner, R-Colo., revealed to Fox News last October that his wife had received a graphic text message with a video depicting a beheading, and that someone had publicly posted the names and addresses of his family members.

At his campaign launch Tuesday night, President Trump emphasized his success in appointing federal judges, and lamented Democrats' treatment of Kavanuagh, telling the crowd, "They didnt just try to win, they tried to destroy him with false and malicious accusations" in the name of "political dominance and control."

"Just imagine what this angry left-wing mob would do if they were in charge of this country," Trump said.