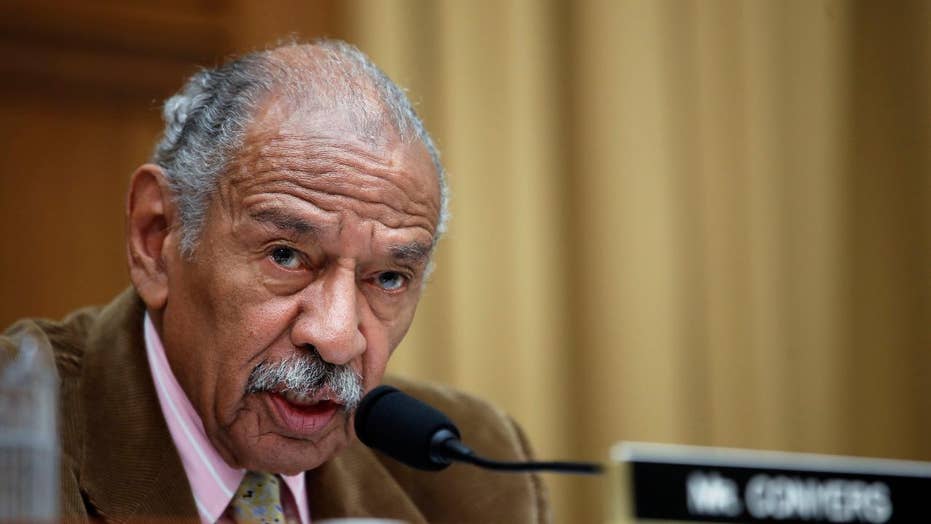 A second Democratic lawmaker called on Rep. John Conyers, D-Mich., to step down Tuesday over sexual misconduct allegations hours after Conyers' former deputy chief of staff detailed three occasions when he made unwanted advances toward her.

Rep. Pramila Jayapal, D-Wash., said in a statement that while she had looked up to Conyers for decades, "I believe these women, I see the pattern and there is only one conclusion – Mr. Conyers must resign."

Jayapal joined Rep. Kathleen Rice, D-N.Y., as the only two lawmakers who have said Conyers should resign from Congress. In a statement of her own last week, Rice called the allegations against Conyers "as credible as they are repulsive."

The 88-year-old Conyers has been under fire since a BuzzFeed News report that he had paid a former staffer more than $27,000 in 2015 to settle a complaint from the woman alleging that she was fired because she rejected his sexual advances. BuzzFeed also published affidavits from former staff members who said they had witnessed Conyers touching female staffers inappropriately or requesting sexual favors.

Deanna Maher, who worked for Conyers between 1997 and 2005, told the Detroit News Tuesday that the congressman partially undressed in front of her in a hotel suite during a 1997 Congressional Black Caucus event.

"I didn't have a room and he had me put in his hotel suite," said Maher, adding that she rejected his offer to share his room at the Grand Hyatt in Washington and have sex.

Maher, now 77, said Conyers also touched her inappropriately in a car in 1998 and touched her legs under her dress in 1999. She said she didn't report the harassment because Conyers is a powerful man in Washington and she didn't think it would be taken seriously.

On Tuesday, members of the Congressional Black Caucus (CBC) met behind closed doors to determine whether they could convince Conyers to resign his seat or leave the organization he helped found in 1971. A spokeswoman for the CBC said Tuesday that the group has no additional comments about the allegations against Conyers beyond a statement released last week that condemned the alleged behavior and called for an House Ethics Committee investigation.

CBC Chair Rep. Cedric Richmond, D-La., told reporters that he and Conyers "had a good conversation" and said he "did not ask [Conyers] to resign."

When asked if Conyers should resign, Richmond said "I have no idea ... that's a personal decision."

Conyers has denied the allegations and refused to resign, though he did announce Sunday that he would step aside as the top Democrat on the House Judiciary Committee.

Separately Tuesday, House Minority Leader Nancy Pelosi, D-Calif., said in a letter to the Ethics panel that it should move quickly in its inquiry.