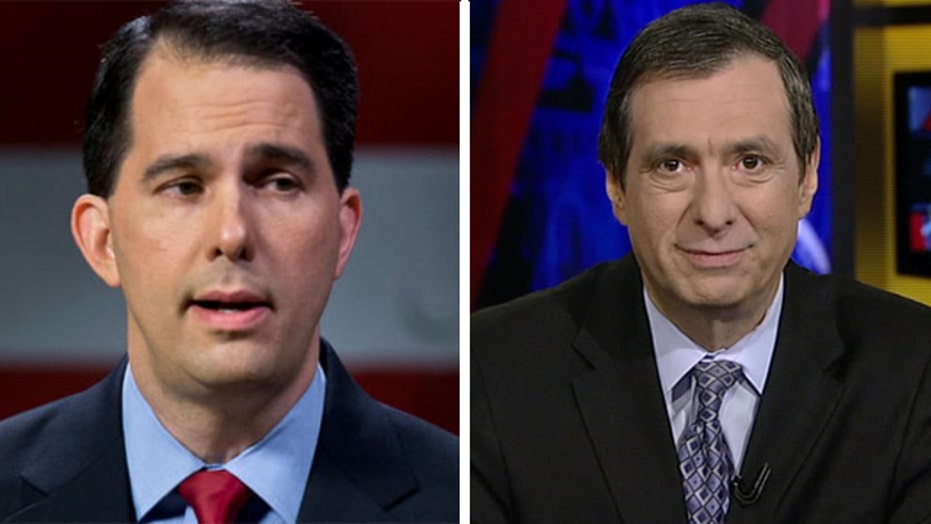 Kurtz: The danger for Scott Walker

One year before the Iowa caucuses, Scott Walker is the buzziest candidate of the moment.

But that may not last, depending on how the media treat him — and how he handles the spotlight.

Right now, here’s what most people know about Scott Walker: He’s the conservative governor of a Midwestern state that has gone Democratic in the last seven presidential elections. He took on the public employee unions and won. And he survived a recall, enabling him to say he’s won the office three times in the last four years.

And that may be about it.

Still, a well-received speech at a conservative conclave in Iowa led to his topping the Des Moines Register/Bloomberg poll last weekend—not bad for a guy who hasn’t had much of a national profile.

With Mitt Romney out of the race, Walker leads the Iowa GOP poll with 16 percent, followed by Rand Paul at 15 percent, Mike Huckabee at 13 percent, Ben Carson at 10 percent and Jeb Bush at 9 percent. Miniscule differences at the top, but the gap between Walker and the son and brother of presidents is telling.

Even more striking are the favorability ratings. Bush has a 46-43 split, and Chris Christie is underwater at 36-54 — both with high negatives they would have to overcome. But while 60 percent of Iowa Republicans surveyed have a favorable view of Walker, only 12 percent have a negative view.

Therein lies the danger. A lot of people don’t know enough about Walker to have an opinion—and a rough-and-tumble campaign will undoubtedly drive those negatives up. The more that Walker is viewed as a top-tier contender, the more that reporters will be digging into his record and his background:

What about that case in which he was investigated for possible illegal coordination between a top adviser and conservative groups? Who in Wisconsin has been hurt by his budget cuts? Why is he proposing to slash funding for public universities while partially underwriting a $500 million stadium for the Milwaukee Bucks? And will reporters investigate whether he was a bully in high school, as they did with Jeb Bush and Mitt Romney?

What's more, there’s the question of where Walker stands on a whole panoply of national issues — especially foreign policy, traditionally a weak spot for governors.

On ABC’s “This Week” Sunday, Walker was calling for a greater military effort against ISIS, and Martha Raddatz was pushing back by pointing to the more than 2,000 airstrikes against the terrorist group in Iraq and Syria.

“Ultimately,” Walker said, “we have to be prepared to put boots on the ground if that's what it takes, because I think, you know —“

“I don't think that is an immediate plan,” he said, “but I think anywhere in the world —"

“But you would not rule that out.”

“I wouldn't rule anything out.”

That strikes me as a rookie misstep. Walker didn’t intend to call for sending American troops to Syria, but by leaving the door open, he invites further questions about the issue, which will force him to clarify his stance.

Fortunately for him, it’s so early in the process that this is a good time for missteps.

Walker is already taking flak from liberal columnists, such as Forbes’ Rich Ungar:

“How does a guy who is, for the first time, leading the polls in Iowa, show up completely unprepared and with nothing to say on a national TV interview? ... Scott Walker is a mediocre county executive who has risen far beyond his talents.”

On the other side of the divide, Ray Hines, a columnist for Alabama’s AL.com, likens Walker to Reagan: “Rest assured, the Democratic National Committee, the unions and the press did everything they could to find a skeleton in Scott Walker's closet so they could destroy him. They didn't find so much as a molecule. He's clean, honest, courageous and he does what he says he'll do.”

Just as critics may unearth unflattering details, future profiles will illuminate Walker’s warmer side, such as this Milwaukee Journal Sentinel piece reporting that includes his dad, a Baptist minister:

“His father preached and his mother ran the Sunday school in this Iowa farm town too small to have a stoplight. Growing up in the parsonage next door — in the shadow of the church — Walker learned his first lessons in faith, politics and living a life on public display.

“His religious upbringing set a course for the governor's later life and may boost his presidential bid among evangelicals in this early caucus state.”

We have a lot to learn about Scott Walker — and that, for him, is both a risk and an opportunity.