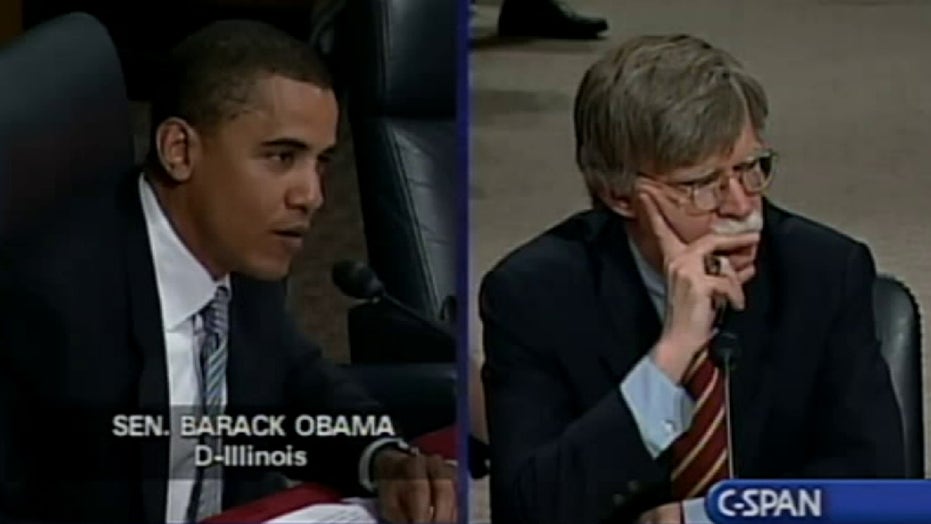 A string of newly resurfaced video clips of former national security adviser John Bolton spurred President Trump and his supporters Wednesday to highlight what they described as serious credibility questions -- raised by both Democrats and Republicans -- amid the Senate impeachment trial, as the president tweeted, "GAME OVER!"

In his tweet, Trump linked to an interview of Bolton in August 2019 where he discusses Ukraine policy. In the Radio Free Europe/Radio Liberty interview clip, Bolton made no mention of any illicit quid pro quo, and acknowledged, as Republicans have claimed, that combating "corruption" in Ukraine was a "high priority" for the Trump administration.

Bolton also called Trump's communications with Ukrainian President Volodymyr Zelensky "warm and cordial," without mentioning any misconduct. It seemingly contradicted reported assertions in Bolton's forthcoming book that Trump explicitly told him he wanted to tie military aid to Ukraine to an investigation into Joe and Hunter Biden. (Zelensky has said his communications with Trump involved no pressure for any investigation.)

Separately, Fox News has identified clips of Rep. Adam Schiff, D-Calif., now the lead House impeachment manager, in which he says Bolton had a distinct "lack of credibility" and was prone to "conspiracy theories." This week, Schiff said Bolton needed to testify in the impeachment trial as an important and believable witness.

"This is someone who's likely to exaggerate the dangerous impulses of the president toward belligerence, his proclivity to act without thinking, and his love of conspiracy theories," Schiff told MSNBC's Rachel Maddow on March 22, 2018, when Trump named Bolton national security adviser.

"And I'll, you know, just add one data point to what you were talking about earlier, John Bolton once suggested on Fox News that the Russian hack of the DNC [Democratic National Committee] was a false flag operation that had been conducted by the Obama administration," he said. "So, you add that kind of thinking to [former U.S. attorney] Joe diGenova and you have another big dose of unreality in the White House."

Schiff made similar arguments back in May 2005, saying in an interview with CNN's "Crossfire" that Bolton was "more focused on the next job than doing well at the last job" when he was up for nomination as ambassador to the United Nations under then-President George W. Bush.

Obama separately had said that Bolton "bullies, marginalizes and undermines those who do not agree with him." Other prominent Democrats agreed with him at the time.

But, speaking to CNN on Monday, Schiff took a different approach -- calling Bolton essential to the "search for truth."

"I think for the senators, and I'm just not talking about the four that have been so much the focus of attention, for every senator, Democrat and Republican, I don't know how you can explain that you wanted a search for the truth in this trial and say you don't want to hear from a witness who had a direct conversation about the central allegation in the articles of impeachment," Schiff said on CNN's "New Day."

Seemingly responding to charges of hypocrisy, Schiff remarked on the Senate floor late Wednesday: "I'm no fan of John Bolton, but I like him a little more now than I used to."

Nevertheless, Democrats' sudden about-face has been drawing some light mockery from even left-of-center commentators.

"Democrats are currently begging Mitt Romney to agree with them that John Bolton should swoop to the impeachment trial and save the day, but remember: you're a despicable Trump-loving apologist if you said ahead of time that this entire thing would be a joke," mused journalist Michael Tracey.

Whether or not the Senate will vote to call Bolton as a witness -- or whether he will legally be able to testify -- remain open questions. Republicans have suggested that Schiff himself should testify over his inconsistent statements concerning his panel's contacts with the whistleblower at the center of the impeachment probe.

Any witness resolution would likely require four Republican defections in the Senate, because in the event of a 50-50 tie, Chief Justice of the United States John Roberts is highly likely to abstain rather than assert his debatable power to cast a tie-breaking vote. The witness question will be decided later this week, after the question-and-answer session of the trial wraps up.

Republicans, who have a 53-47 majority in the chamber, have suggested to Fox News that they would amend any witness resolution that subpoenas Bolton to also require the appearance of several additional witnesses favorable to the Trump administration -- likely killing support in the Senate for the whole witness package altogether.

In the meantime, concerns over Bolton potentially divulging classified information, as well as violating the legal principle of executive privilege, have emerged. On Wednesday, the White House revealed it had told Bolton not to publish his upcoming tell-all book about his time in the Trump administration until classified material is removed from the manuscript.

“Under federal law and the nondisclosure agreements your client signed as a condition for gaining access to classified information, the manuscript may not be published or otherwise disclosed without the deletion of this classified information,” Ellen J. Knight, a National Security Council (NSC) aide, wrote in a letter to Bolton attorney Charles J. Cooper last week, which was obtained by Fox News.

Bolton’s book has disrupted Trump’s impeachment trial. The New York Times reported that Bolton's draft manuscript includes a claim that Trump explicitly linked a hold on military aid to Ukraine to an investigation of Joe and Hunter Biden -- a central part of the case against Trump.

The letter from the NSC was transmitted to Bolton’s attorney on Jan 23. The New York Times article about the manuscript came out on Sunday, Jan. 26 -- three days after the letter was transmitted. That indicates that the NSC had already made the determination that there was top secret information in Bolton’s manuscript before anything became public.

Earlier in the day, CNN reported that the letter amounted to a threat against Bolton. But sources told Fox News this was not a “threat,” saying the letter merely points out that there is top secret information contained in the manuscript that cannot be released to the public.

Bolton’s book is titled "The Room Where It Happened" and is scheduled for release sometime in March. Suspicions have been raised about where the leak to The New York Times originated. National Security Adviser Robert O’Brien said Wednesday he is “pretty confident” the leak did not come from NSC. Meanwhile, Bolton, his publisher and book agents have denied "coordination" with The Times.

“On that call, Ambassador Bolton suggested to me -- unprompted -- that the committee look into the recall of [Ukraine] Ambassador Marie Yovanovitch. He strongly implied that something improper had occurred around her removal as our top diplomat in [Kiev]," Engel said. 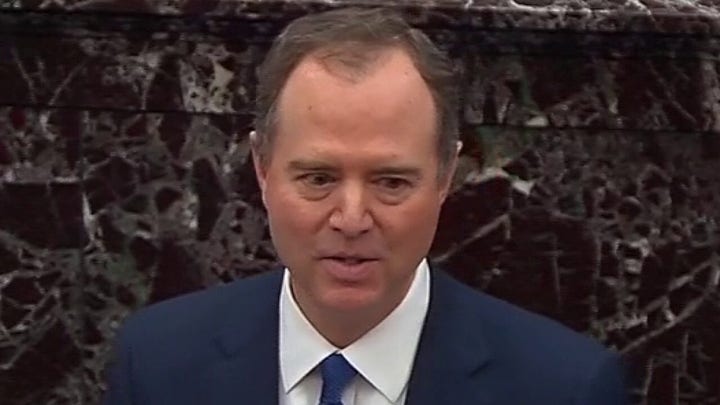 Even as criticism of Bolton heats up on the GOP side, South Carolina Republican Sen. Lindsey Graham, a close Trump ally, has counseled his party against unloading on Bolton.

"It is my opinion, based on the law and facts, that additional testimony is unnecessary in this case," Graham said in a statement. “For the sake of argument, one could assume everything attributable to John Bolton is accurate and still the House case would fall well below the standards to remove a president from office."

That was the argument advanced by Harvard Law professor Alan Dershowitz in his primetime defense of the president during the impeachment trial on Monday. 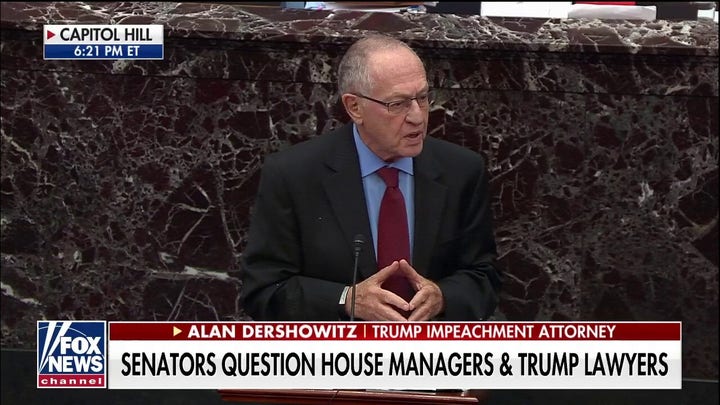 Graham continued: “It is clear to me that there is ample evidence for the President to be concerned about conflicts of interest on behalf of Hunter Biden and that Vice President Joe Biden’s failure to take appropriate action was unacceptable. This combination, in my view, undercut America’s message on reforming corruption in Ukraine. There is a mountain of evidence to suggest the Bidens’ behavior was harmful to the United States. The House managers’ claim that the sole reason President Trump temporarily paused the aid was purely personal and political, not public, does not withstand scrutiny."

Nevertheless, Graham added, "I am concerned when John Bolton’s credibility is attacked, it makes it more likely some will feel the need to call him as a witness. In that event, it would be important for the President and his team to call witnesses on other issues."