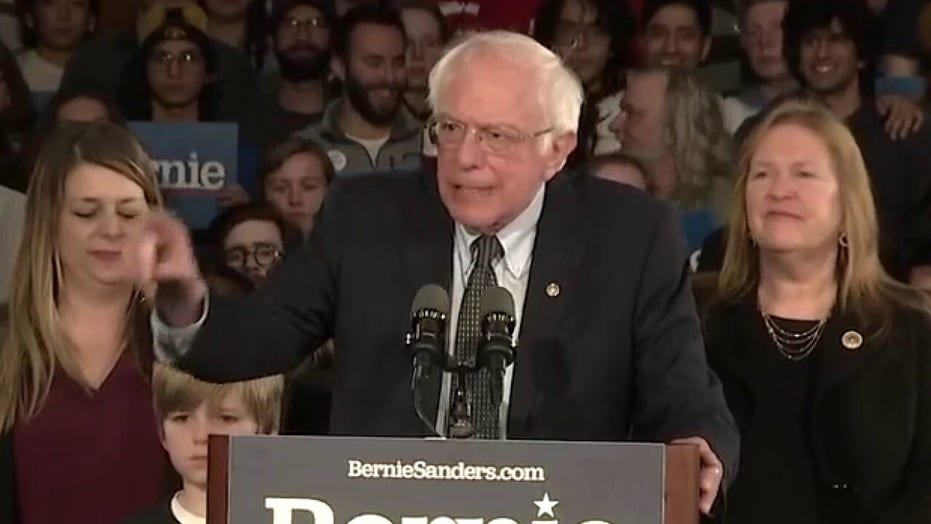 Sen. Bernie Sanders projected confidence during his speech Monday night, amid uncertainty in results from the Iowa caucuses.

Sanders, I-Vt., took the stage in Iowa Monday night, alongside his wife Jane, and their family, joking with a large audience about the hours-long delay in the Iowa Democratic Party reporting the outcome of the nation’s first contest.

“I imagine, I have a strong feeling, that at some point, the results will be announced,” Sanders joked, and was greeted by laughter. “And when those results are announced, I have a good feeling we’re going to be doing very, very well here tonight.”

Sanders was confident in his speech Monday, despite no indications of his performance during the caucuses. Sanders was narrowly defeated in 2016 by Hillary Clinton during the first nominating contest in the state.

“Tonight, in this enormously consequential 2020 election, the first state in the country has voted and today marks the beginning of the end for Donald Trump,” Sanders said.

“No matter what our political views may be, the American people know we cannot continue to have a president who is a pathological liar,” he continued. “Who is corrupt, who does not understand our constitution, who is trying to divide our people up by the color of their skin, their religion, their sexual orientation or where they were born.”

He added: “All of that hatred and divisiveness is going to end when together, we are in the White House.”

Despite the main focus on Monday night being on Democrats’ first contest of the 2020 primary, Republicans in Iowa also caucused, delivering an easy victory for the president

Trump easily defeated his primary rivals—former Massachusetts Gov. Bill Weld and former Illinois Rep. Joe Walsh—with roughly 97 percent of the vote. The primary challengers walked away with about 1 percent each. And Monday’s results indicated that those attempting to take on Trump within his own party stand a slim chance of making headway against the incumbent.

Meanwhile, Sanders vowed to “win this election,” saying that people in the United States “are sick and tired of a massive level of income and wealth inequality.”

HOW DO THE IOWA CAUCUSES WORK?

He added: “And whether they like it or not, we will pass a Medicare for All single-payer program.”

Sanders' speech came amid chaos in Iowa, with 2020 Democratic presidential hopefuls packing up and leaving the state around midnight and heading to New Hampshire for the first in the nation primary scheduled for next week.

The Iowa Democratic Party reported a delay due to “quality control.” By 11:30 p.m. EST, there still were not early results from the caucuses to report.

"The integrity of the results is paramount. We have experienced a delay in the results due to quality checks and the fact that the IDP is reporting out three data sets for the first time,” communications director for the Iowa Democratic Party Mandy McClure said in a statement Monday. “What we know right now is that around 25% of precincts have reported, and early data indicates turnout is on pace for 2016."