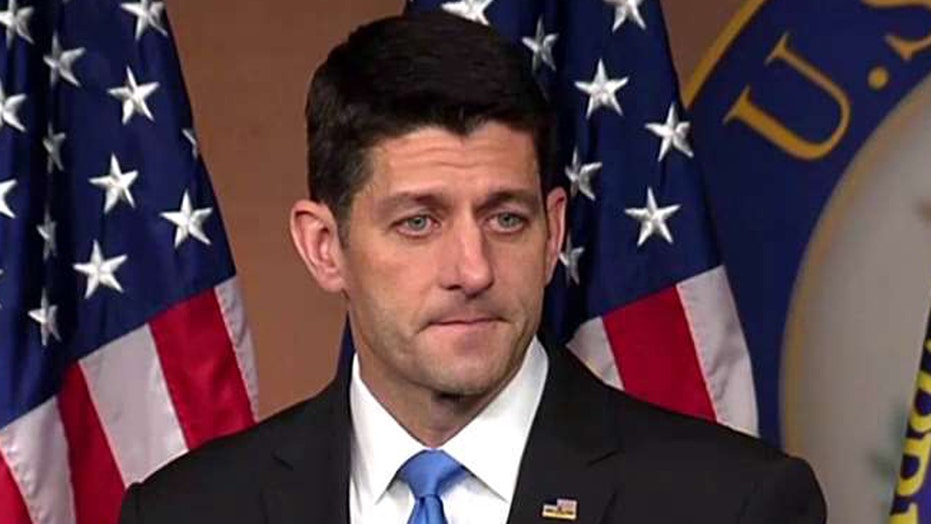 Ryan: Very encouraged by what I heard from Trump today

Donald Trump and Paul Ryan might not have built the bridge but they at least may have established the framework toward presenting a unified front against Democrats in November, after their sit-down Thursday morning on Capitol Hill.

Following a bruising primary season where Trump and House Speaker Ryan were publicly cool toward one another, the two met at Republican Party headquarters in downtown Washington, and later described it as a “great conversation.”

Much was at stake for the presumptive nominee, for Ryan and for the party itself. The meeting was called after Ryan last week declined to endorse Trump – at a press conference following the meeting, Ryan still would not publicly do so.

Reprising comments from a day earlier, Ryan said: “This is a process. It takes a little time. You don’t put it together in 45 minutes. … I don’t want us to have a fake unification process here.”

At the same time, Ryan said he was “very encouraged” and they are “planting the seeds” to get unified.

Trump on Thursday had lined up three meetings with members of the Republican establishment he’s spent much of his campaign railing against. He met first with Ryan and RNC Chairman Reince Priebus, who also tweeted that the meeting was a “very positive step toward party unity.” He then sat down with House GOP leaders, followed by a meeting with Senate Majority Leader Mitch McConnell, R-Ky., and other top Senate Republicans.

“While we were honest about our few differences, we recognize that there are also many important areas of common ground,” Trump and Ryan said in a joint statement. “We will be having additional discussions, but remain confident there’s a great opportunity to unify our party and win this fall, and we are totally committed to working together to achieve that goal. … This was our first meeting, but it was a very positive step toward unification.”

A source inside the first meeting also described it as “very positive” and a “good step toward achieving party unity.” According to the source, Trump and Ryan discussed a range of policy issues. The source would not characterize, though, whether Ryan was “there” yet on Trump himself.

But the source provided an unvarnished assessment to Fox News: “No B.S. Very helpful.”

On the sidelines, lawmakers had conflicting views over how to handle Trump as their party nominee.

Sen. John Thune, R-S.D., though, said he’s among those “who would love to see [Trump] tone it down.”

On Wednesday, explaining his hesitation about outright endorsing Trump, Ryan said he wanted to pursue "real unification" among Republicans after a hotly contested primary campaign.

"We cannot afford to lose this election to Hillary Clinton,” Ryan said at a news conference Wednesday.

In a closed-door GOP meeting Wednesday, a number of Republicans stood up and argued in support of Trump, with one saying that anyone who cares about "unborn babies" should get behind him because of the likelihood the next president will make Supreme Court appointments, and Trump's would be better than Clinton's, lawmakers who were present told the Associated Press.

Others expressed reservations, and asked Ryan to raise concerns with Trump about where he really stands on social issues and budgetary policies, including changes to Social Security and Medicare. Trump has said in the past that he doesn't want to touch Social Security or Medicare, whereas Medicare cuts have been a centerpiece of GOP budgets Ryan has shepherded over the years.

Earlier Wednesday, Trump sought to downplay the stakes of his visit with Ryan, telling "Fox and Friends", "If we make a deal, that will be great. And if we don't, we will trudge forward like I've been doing and winning all the time."

Trump's allies and advisers have repeatedly insisted that he can claim the White House with or without leading congressional Republicans. Additionally, Trump's team doesn't believe Ryan or the GOP's other congressional leaders have any significant influence on the majority of general election voters.

Some congressional Republicans have made clear that they would like to see Ryan come around to supporting Trump sooner rather than later.

Another Trump supporter, Rep. John Fleming, R-La., predicted it was "very unlikely" that Ryan would not ultimately back the Republican nominee.

Wednesday night, Trump's campaign released an endorsement signed by the chairs of seven House committees. "It is paramount that we coalesce around the Republican nominee, Mr. Donald J. Trump," the GOP lawmakers wrote.

While Trump's team is prepared to shrug off much of the party's establishment, that does not include the RNC.

The political novice plans to rely heavily on the committee's expansive political operation to supplement his bare-bones campaign, which has so far ignored seemingly vital functions such as voter data collection, swing-state staffing and fundraising infrastructure.

"As we turn our focus toward the general election, we want to make sure there's the strongest partnership," said Sean Spicer, the RNC's chief strategist.

Absent a viable Republican alternative, there were new signs on Capitol Hill that Trump's conservative critics were beginning to fall in line.

"As a conservative, I cannot trust Donald Trump to do the right thing, but I can deeply trust Hillary Clinton to do the wrong thing every time," said Rep. Trent Franks, R-Ariz., adding that he would vote for Trump if that's the choice he has.

Rep. Raul Labrador, R-Idaho., said he will support Trump, although "I'm not enthusiastic about it."

"He can get us enthusiastic if he comes to talk to us," continued Labrador.

Meanwhile, more Republican voters appear to be moving behind Trump, despite big-name holdouts such as Ryan, both former president Bushes and the party's 2012 nominee Mitt Romney.

Almost two in three Republican-leaning voters now view Trump favorably, compared to 31 percent who view him unfavorably, according to a national Gallup Poll taken last week. The numbers represent a near reversal from Gallup's survey in early March.