EXCLUSIVE: The Republican National Committee (RNC) on Friday filed a complaint with the Federal Election Commission (FEC) alleging that the censorship of the New York Post article about Hunter Biden’s overseas business dealings and former Vice President Joe Biden’s alleged knowledge of those dealings amounts to an “illegal corporate in-kind political contribution” to the Biden campaign, Fox News has learned.

The complaint, filed by the RNC on Friday and obtained exclusively by Fox News, states that the RNC “believes that Twitter has violated FECA and the Commission’s Regulations by making corporate in-kind contributions to Biden for President.”

The RNC, in its complaint, said Twitter “is a partisan actor, run by partisan Democrats” and is “using its corporate resources to provide active support for Joe Biden’s campaign in violation of federal law,” and demanded the FEC “conduct an immediate investigation” into Twitter’s “illegal in-kind contributions to the Biden campaign,” and “impose the maximum penalty allowed under the law.”

The complaint comes after Twitter prevented users from sharing a link to a New York Post report about emails shedding light on Hunter Biden’s business dealings and contradicting the Democratic presidential nominee’s past comments claiming he had no knowledge of his son’s business activities.

The RNC claimed that Twitter is “engaged in arguably the most brazen and unprecedented act of media suppression in this country’s history, and it is doing so for the clear purpose of supporting the Biden campaign.”

The RNC claimed that Twitter has “taken unprecedented actions to suppress the articles from being shared on its platform.”

“Democrat media consultants can only dream of such abilities,” the complaint read. “Through its ad hoc, partisan oppression of media critical of Biden, [Twitter] is making illegal, corporate in-kind contributions as it provides unheard-of media services for Joe Biden’s campaign.”

The complaint references federal campaign finance law, which “strictly prohibits corporations from making contributions to federal candidates,” and notes that “contribution” is defined to mean “anything of value made by any person for the purpose of influencing an election.” 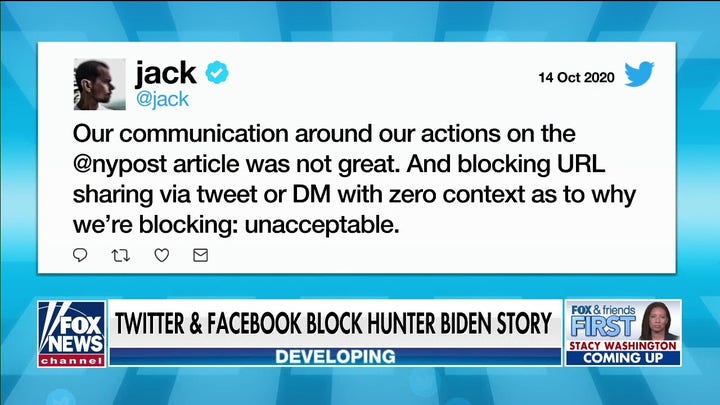 The RNC also noted that the “suppression” of The Post article “provides a thing of value to the Biden campaign.”

“[Twitter] is acting as Biden’s media operative, taking proactive steps to shield Biden from negative news coverage by blocking its distribution and muzzling those who try,” the complaint read. “If [Twitter] charged for this service, Biden no doubt would gladly pay a significant price.”

The RNC went on to claim that Twitter’s actions “have not occurred in a vacuum” and instead are “keeping with the company’s open support for Joe Biden and hostility toward President Trump and other conservatives.”

“[Twitter’s] feud with President Trump is well known, as are its frequent efforts to censor the President’s tweets and the ‘shadow banning’ of prominent Republicans, including RNC’s Chair, Ronna McDaniel, and several Republican members of Congress,” the complaint states, while adding that Twitter CEO Jack Dorsey and other executives “are prolific donors to the Democrat party and other left-wing causes, with 98.7% of the company’s total political contributions going to Democrats.”

The complaint also claims there is a “revolving door between the Biden campaign” and Twitter, saying Twitter’s public policy director recently left the company to join the Biden transition team, and Sen. Kamala Harris’ former press secretary is now serving as a senior communications manager at Twitter.

"Twitter’s decision to censor news articles that harm Joe Biden’s candidacy is so transparently biased it would make even the governments of China or North Korea blush," RNC Chairwoman Ronna McDaniel told Fox News. "Fortunately, in this country, we have tools at our disposal to fight back against this type of censorship. The RNC is calling on the Federal Elections Commission to investigate whether Twitter’s actions amount to an illegal corporate in-kind contribution to the Biden presidential campaign."

She added: "Twitter’s flagrant bias and direct support for one presidential candidacy over the other should result in the proper financial ramifications under our campaign finance laws.”

Neither the spokesman for Twitter nor the the Biden campaign responded immediately to Fox News' request for comment.

The controversy came after the New York Post obtained emails that reveal that Hunter Biden purportedly introduced his father to a top executive at Burisma Holdings in 2015.

The Post report revealed that Biden, at Hunter’s request, allegedly met with Burisma adviser Vadym Pozharskyi in April 2015 in Washington, D.C. The meeting was mentioned in an email of appreciation, according to the Post, that Pozharskyi sent to Hunter Biden on April 17, 2015 — a year after Hunter took on his position on the board of Burisma, and a year prior to Biden helping to push Ukrainian prosecutor Viktor Shokin out of his job. Shokin was investigating Burisma.

“Dear Hunter, thank you for inviting me to DC and giving an opportunity to meet your father and spent some time together. It’s realty [sic] an honor and pleasure,” the email read.

The emails turned up on the hard drive of a laptop dropped off at a repair shop in 2019, the Post reported, adding that a copy of the hard drive ended up in the hands of Robert Costello, a lawyer for Rudy Giuliani, a personal attorney for President Trump.

The Biden campaign hit back on Wednesday: "Investigations by the press, during impeachment, and even by two Republican-led Senate committees whose work was decried as 'not legitimate' and political by a GOP colleague have all reached the same conclusion: that Joe Biden carried out official U.S. policy toward Ukraine and engaged in no wrongdoing.”

A Biden campaign spokesman said that Trump administration officials testified that the former vice president did not engage in wrongdoing.

"The New York Post never asked the Biden campaign about the critical elements of this story," Biden campaign spokesman Andrew Bates said. "They certainly never raised that Rudy Giuliani -- whose discredited conspiracy theories and alliance with figures connected to Russian intelligence have been widely reported -- claimed to have such materials.”

Bates said campaign officials also reviewed Biden's official schedules from the time and the meeting alleged by the New York Post did not take place. 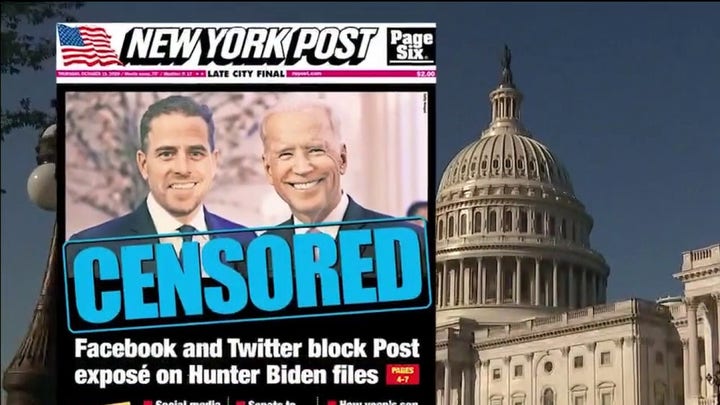 "This is election interference, plain and simple. For Twitter to lock the main account of the campaign of the president of the United States is a breathtaking level of political meddling and nothing short of an attempt to rig the election," Trump campaign communications director Tim Murtaugh told Fox News. "Joe Biden’s Silicon Valley pals are aggressively blocking negative news stories about their guy and preventing voters from accessing important information. This is like something from communist China or Cuba, not the United States of America.”

"Commentary on or discussion about hacked materials, such as articles that cover them but do not include or link to the materials themselves, aren’t a violation of this policy," Twitter said. "Our policy only covers links to or images of hacked material themselves.”

"Accounts that Tweet the materials or links to the materials referenced here may be required to delete those Tweets based on our policies on hacked materials and private and personal information," a Twitter spokesperson said Thursday.