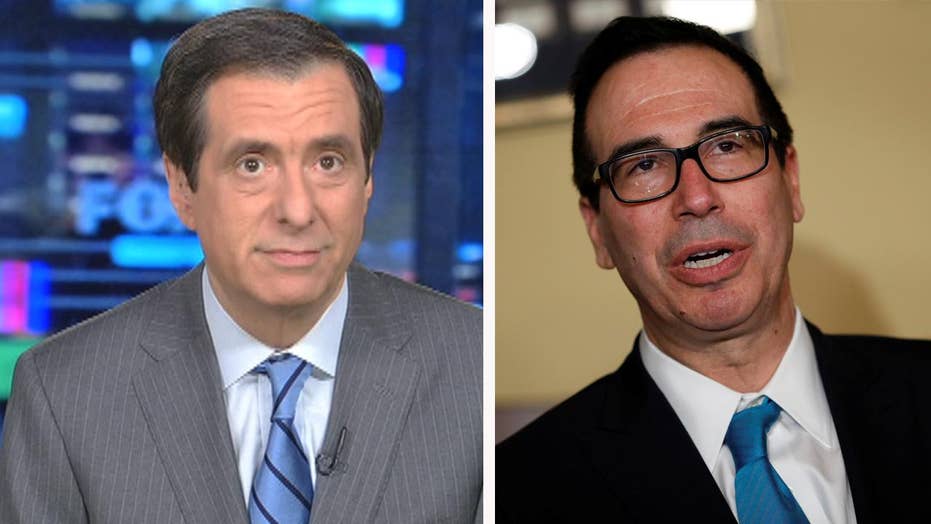 'MediaBuzz' host Howard Kurtz weighs in on the hurdles facing both the Senate and House GOP tax reform bills.

If the Republicans were already under pressure to put points on the board, the Democratic wins on Tuesday have turned tax reform into the Super Bowl.

By their own admission, they need a major piece of legislation to take to the voters in 2018, whether the election results in Virginia and New Jersey are being overblown or not.

And yet they are struggling. Tax reform is a noble goal but an ugly process, with too much money at stake and too many vested interests fighting over each deduction. And President Trump's goal of getting this done by Christmas may prove exceedingly difficult.

By the way, his chief economic adviser, Gary Cohn, didn’t help matters by telling CNBC’s John Harwood, "We see the whole trickle-down through the economy, and that's good for the economy." He may be unaware that "trickle-down economics" is the pejorative label that Democrats slapped on Ronald Reagan’s approach to taxes.

The core of the political argument is whether or not the middle class is getting a tax cut, as the administration contends. The New York Times, in its own analysis, says no: "Nearly half of all middle-class families would pay more in taxes in 2026 than they would under current rules if the proposed House tax bill became law, and about one-third would pay more in 2018."

If the projects by the Times and other groups are right, it will be easier for critics to brand the effort as mainly helping the wealthy.

Senate Republicans complicated matters yesterday by pushing ahead with a plan that differs from the House, since they would have to be reconciled as the clock keeps ticking. The Ways and Means panel passed the House bill yesterday.

The senators would break with Trump by delaying his top priority, slashing corporate tax rates, from next year until 2019. The reason is simple—to save $100 billion—because if the impact on the deficit is too large, the Senate loses special rules allowing the bill to be passed with 51 votes.

In other changes, the Senate Republicans would keep the popular mortgage tax break capped at $1 million, while the House side would cut that in half. But the Senate would be less generous in eliminating the ability to deduct state and local taxes, while the GOP congressmen would just cut it back.

Bottom line: This is all about winners and losers. Voters who get to deduct the most in state and local taxes tend to live in such blue states as New York and California. Voters who could use another half-million in mortgage deductions tend to be richer. Corporate leaders who tend to support Republicans would be most upset about the delay in cutting their companies’ tax rate from 35 to 20 percent.

No one needs to remind the Republicans that they fell short on Tuesday and haven’t passed a major bill this year. They badly want a win. But tiptoeing through the tax-reform minefield was never going to be easy.